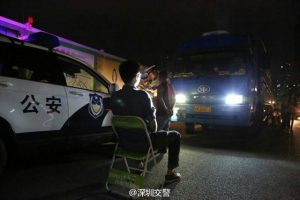 When driving at night, there’s nothing quite as annoying as being blinded by the full-beam headlights of another vehicle. Recognizing this problem, the police department recently started punishing offenders by making them stare at their own headlights for a full minute. Hopefully, this will make them see the error of their ways.

On November 1st, Shenzen police took to Weibo, China’s most popular social network to warn drivers that anyone caught using their car’s headlights on the full beam illegally would be fined 300 yuan ($44),  lose points on their license and be made to recite regulations on the proper use of headlights. But what really drew people’s attention was the introduction of a new and unconventional punishment – making offenders stare into the high-beam headlights for 60 seconds, while sitting on a specially-designed chair. 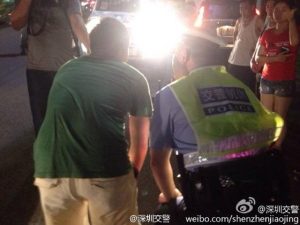 Interestingly, police Shenzen first launched this initiative in 2014 and got a lot of criticism for it, but this time around, the vast majority of Weibo users seemed very supportive. “Traffic police comrades, I believe this kind of punishment is not right, it’s inhumane, they should have to look for 5 minutes,” one person commented.  “The whole country should implement this immediately,” another added.

Several other local police forces gave it the thumbs-up on their social media accounts, and a poll on the mainstream Sina news portal found that 90% of people supported the unusual punishment. 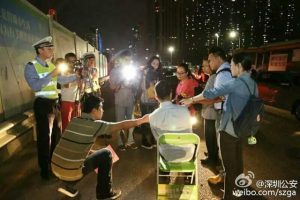 The few that didn’t approve cited a “violation of human rights”, expressed concern about potential eye damage,or simply wondered on what grounds the officers could force drivers to stare into the bright lights, since the punishment is certainly not mentioned in the law.

The Shenzen Police Department is one of the most popular in China. It’s famous for its unusual initiatives, which in the past have included making jaywalkers wear green hats and vests while directing pedestrian traffic, mounting dummy traffic policemen on the highway or issuing sword-shaped batons to its members.