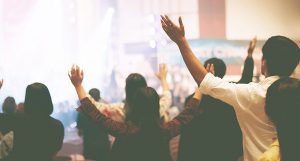 The power of the presidency isn’t the only way Christian nationalism is advancing its agenda in America today.

It’s just beginning to dawn on folks how much Donald Trump’s presidency relies on religious support. All the scandals surrounding Trump have brought intense attention to the 81 percent support he received from evangelical Christians in the 2016 election. New research by Andrew Whitehead, meanwhile, explicates such support in the context of Christian nationalism, and historian John Fea has published an important new book, “Believe Me: The Evangelical Road to Donald Trump.”

But the power of the presidency isn’t the only way Christian nationalism is advancing its agenda in America today. As researcher Frederick Clarkson reported Friday at Religion Dispatches, a coalition of Christian right groups — including the Congressional Prayer Caucus Foundation, Wallbuilders, the National Legal Foundation and others — have organized a major legislative initiative called  “Project Blitz.” Its goal is to pass an outwardly diverse but internally cohesive package of Christian-right bills at the state level, whose cumulative impact would be immense.

The agenda underlying these bills is not merely about Christian nationalism, a term that describes an Old Testament-based worldview fusing Christian and American identities, and meant to sharpen the divide between those who belong to those groups and those who are excluded. It’s also ultimately “dominionist,” meaning that it doubles down on the historically false notion of America as a “Christian nation” to insist that a a particular sectarian view of God should control every aspect of life, through all manner of human institutions. Christian nationalists are not in a position to impose their vision now, and to be fair, many involved in the movement would never go that far. But as explained by Julie Ingersoll in “Building God’s Kingdom: Inside the World of Christian Reconstruction” (Salon interview here), dominionist ideas have had enormous influence on the religious right, even among those who overtly disavow them.

“The authors of the Project Blitz playbook are savvy purveyors of dominionism,” Clarkson told Salon. “They are in it for the long haul and try not to say things that sound too alarming. ​But they live an immanent theocratic vision, and they sometimes cannot help themselves, such as when they describe the resolutions as seeking to ‘define public policies of the state in favor of biblical values concerning marriage and sexuality.’

“Among the ways they are seeking to implement ‘biblical values,’” Clarkson continued, “is by seeking religious exemptions from civil rights laws and professional licensing standards.” The two-tiered society this would create reflects the essence of Christian nationalism, as Whitehead describes it.

Whitehead told Salon: “Our work shows that believing that the United States is a ‘Christian nation’ and desiring a close, symbiotic relationship between Christianity and civil society is significantly associated with a number of stances like opposition toward same-sex marriage, antipathy toward religious minorities and a tendency toward endorsing stricter racial boundaries in romantic and family relationships.” So it makes sense, he continued, “that these groups who advocate for a formal recognition of the ‘Christian nation’ narrative are also seeking to formalize support for particular definitions of marriage, gender identity and family structure” — definitions that elevate some people and effectively subjugate others.

So far, supporters of this initiative have introduced 71 bills nationwide this year (or carried them over from last year), according to tracking by Americans United for Separation of Church and State. Most have innocuous or feel-good names like the National Motto Display Act (23 bills), the First Amendment Defense Act (10 bills), the Child Protection Act (four bills), the Bible Literacy Act (eight bills) and the Clergy Protection Act (six bills). The goal is to come across as apple-pie Americans, while copying the conservative pro-corporate model of the American Legislative Exchange Council (ALEC), which has been strikingly successful. But the guiding vision behind Project Blitz is heavily influenced by pseudo-historian David Barton, a leading propagandist for the myth that America was founded as a “Christian nation.”

“David Barton has been discredited by every American historian I know, including evangelical historians who teach at the most conservative Christian colleges in the country, including Bob Jones University and Liberty University,” John Fea (author of the above-mentioned “Believe Me”) told Salon. “He is a politician who uses the past for his own political agenda.”

But that’s not the whole story. “Having said that, he is one of the most important people in American politics today,” Fea continued. “Why? If Andrew Whitehead and his colleagues are correct, evangelicals supported Trump because they believe America was founded as, and continues to be, a Christian nation. No one has promoted this narrative more effectively than David Barton.”

The war injury conjured up by the name “Project Blitz” is no accident. This is religious war in the minds of those waging it, and they’ve got specific goals and strategies in mind. But it’s not easy for outsiders to see what’s going on here, as Clarkson explains in his story:

The bills are seemingly unrelated and range widely in content — from requiring public schools to display the national motto, “In God We Trust” (IGWT); to legalizing discrimination against LGBTQ people; to religious exemptions regarding women’s reproductive health. The model bills, the legislative strategy and the talking points reflect the theocratic vision that has animated many in the Christian Right for some time. In the context of Project Blitz’s 116-page playbook, however, they also reveal a highly sophisticated level of coordination and strategizing that echoes the American Legislative Exchange Council (ALEC), which infamously networks pro-business state legislators, drafts legislation, and shares legislative ideas and strategies.

The bills are organized into three tiers, “according to the degree of opposition they anticipate — 1 being the least,” Clarkson reports. “The general plan is to begin with the less controversial measures to get legislators comfortable with the subject matter; to seek small victories first.” The full meaning and significance of the earlier measures will not become readily apparent until later measures build on them and covertly synergies are revealed.

The first tier, “Legislation Regarding Our Country’s Religious Heritage,” aims at importing the Christian nationalist worldview (including Barton’s bogus history) into public schools and other aspects of the public sphere. It starts simply with display of the motto, “In God We Trust,” a Cold War replacement for “e pluribus unum” — out of many, one — which better reflects America’s pragmatic, pluralist foundations. The second tier, “Resolutions and Proclamations Recognizing the Importance of Religious History and Freedom,” aims at making government increasingly a partner in “Christianizing” America. The third tier, “Religious Liberty Protection Legislation,” has three subcategories, one dealing with “public policy resolutions,” the other two with specifically targeted but sweepingly conceived “protections” for religious practices.

“Category 3’s focus on religious liberty is especially relevant today,” in the wake of the Supreme Court’s historic Obergefell decision, said Daniel Bennett, author of “Defending Faith: The Politics of the Christian Conservative Legal Movement.” With same-sex marriage a settled issue, right-wing Christian groups “will want to prioritize protection for religious liberty, defined in their specific way. The Christian legal movement is fighting these battles in the court, but these sorts of legislative proposals show how wide-ranging the broader movement’s strategy is.”

It’s a defensive fight now, but it’s also laying the groundwork for a possible future counter-offensive. “Although Category 3 is divided in three parts, you could also see it as having two main underlying intentions,” said Clarkson. “First to denigrate the LGBTQ community, and second to defend and advance the right to discriminate. This is one way that the agenda of theocratic dominionism is reframed as protecting the right of theocrats to discriminate against those deemed second-class, at best. As the late theocratic theologian R.J. Rushdoony said, ‘Only the right have rights.’”

Bills protecting the “right” to discriminate against the LGBTQ community are the most salient example of how Project Blitz aims to produce a radically altered “Handmaid’s Tale-style America. But even the most innocent-seeming proposal — introducing the motto “In God We Trust” into schools — has a divisive, discriminatory, damaging impact, sharply at odds with its presentation.

“To an ex-evangelical such as myself, Project Blitz is deeply concerning,” Christopher Stroop told Salon. Stroop is a scholar, writer and Twitter personality with a history and humanities Ph.D. from Stanford, who is currently senior research associate with the Postsecular Conflicts project. As he says, he spent many years in the evangelical world.

“When I was growing up in the 1980s,” Stroop said, “two issues that were frequently lamented in my evangelical community were the legalization of abortion and the supposed banning of prayer in school — ‘supposed’ because the right-wing evangelicals I grew up with usually failed to note that the Supreme Court had only ended officially school-sponsored prayer, and had not outlawed private prayer in schools. Extreme exaggeration of the ostensible persecution we supposedly faced as Christians was prevalent in my childhood milieu.”

The attempt to reverse that imagined persecution can have real damaging effects, as Stroop notes. In examining the goal of requiring “In God We Trust” to be displayed in public schools, he said, “I cannot help but associate this goal with evangelical resentment over legal limitations on prayer in school, and to see it as an attempt to take a step toward the Christianization of public schools. On its own, posting the motto ‘In God We Trust’ in schools would already embolden Christian nationalists present in those schools, leading Muslim, Jewish, Buddhist, Hindu, liberal and atheist children to feel alienated and pressured to conform.”

This story originally appeared in Salon, republished by RawStory under a Creative Commons license.