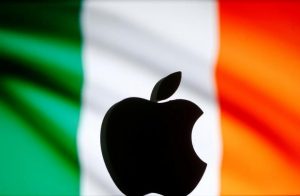 A 3D printed Apple logo is seen in front of a displayed Irish flag in this illustration taken September 2, 2016. REUTERS/Dado Ruvic/Illustration/File Photo

The Obama administration on Thursday took action to limit the use of foreign tax credits by American multinational companies to reduce their U.S. tax bills, a move that followed an EU order that Apple Inc pay back taxes to Ireland.

The Treasury issued legal guidance reducing the scope companies have to apply foreign tax credits against their U.S. tax obligations.

It was not immediately clear how this could affect Apple, which European regulators ordered last month to pay Ireland 13 billion euros ($14.6 billion).

“We are closing another tax loophole that contributes to the erosion of our tax base,” said Treasury Assistant Secretary for Tax Policy Mark Mazur in a statement.

The Treasury’s action underscored growing frustrations in Washington and the European Union over corporate strategies to minimize their tax bills.

Analysts have speculated whether Apple would be able to cut its U.S. tax bill by claiming foreign tax credits for the extra taxes it has been told to pay in Europe. Treasury Secretary Jack Lew has expressed concern the EU ruling could undermine the U.S. tax base.

The Treasury had no immediate comment on whether the legal guidance would impact Apple, but a spokesperson said the tax notice applies to all companies required by a foreign government to pay additional taxes.

The department is also concerned U.S. multinationals could artificially reduce their U.S. tax bill after being ordered to pay extra foreign taxes through state-aid investigations, the spokesperson said, a reference to the type of probe the EU used to up Apple’s tax bill in Ireland.

In that investigation, the EU executive ruled that Ireland used a special low tax rate for Apple as improper state aid for the company. Apple and Ireland are appealing the EU ruling.