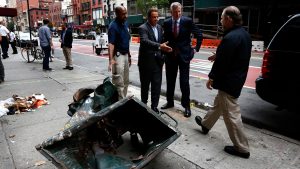 NEW YORK, NY – SEPTEMBER 18: New York Mayor Bill de Blasio (R) and New York Governor Andrew Cuomo (C) stand in front of a mangled dumpster while touring the site of an explosion that occurred on Saturday night on September 18, 2016 in the Chelsea neighborhood of New York City. An explosion in a construction dumpster that injured 29 people is being labeled an ‘intentional act’. A second device, a pressure cooker, was found four blocks away that an early investigation found was likely also a bomb. (Photo by Justin Lane-Pool/Getty Images)

Could a terror attack elect Donald Trump? I’ve long pondered that question and despite some analysts making a logical argument that it night not be enough, I increasingly have felt yes — particularly if it’s coupled with several other October surprises, all aimed at defeating Democratic Presidential nominee Hillary Clinton (see below). The Daily Beast’s Executive Editor and CNN Contributor John Avlon, a favorite of TMV readers and always a must read for moderates, independents and centrists, raises the issue of the possible impact of terrorism in a must-read-in-full post on The Daily Beast.

He begins with a historical reminder that, yes, terrorists attacks can indeed change the course of an election in a way that terrorists (or for that matter countries that are adversaries of a country) want:

On the morning of March 11th, 2004, ten bombs exploded during the morning commute at Madrid’s Atocha train station. One hundred and ninety-two people were murdered and over 2,000 injured. Three days later, the government of Prime Minister Jose Maria Aznar lost power in an election that swung suddenly to the Socialist Party.
The attack, the deadliest in Spain’s history, was seen by many as an al-Qaeda-inspired retaliation for the Aznar government’s support for the already unpopular U.S. invasion of Iraq. In jihadist lore, this is a legendary success story: a terror attack that inspired enough fear to swing a Western election.
This story has been kicking around the back of my cabeza since Donald Trump won the Republican nomination, and I thought of it again after the explosion Saturday night in Chelsea. Demographic math and a basic failure by the celebrity demagogue to reach out beyond his base makes a general election win unlikely but hardly impossible. Trump can’t be counted out until all the votes are counted.

Though he’s a uniquely unqualified candidate, I’ve been concerned about an outside X-Factor event suddenly changing the emotional calculus of the electorate in ways that we would later regret. This could be a sudden economic collapse or a cyber October-surprise. But terrorism has always seemed the prime known-unknown.
After all, terrorism is now a depressingly regular feature of American life. While no attacks have rivaled 9/11, we saw at least 45 thwarted terror plots in the first ten years after the destruction of the World Trade Center and in the last year alone suffered horrific losses in the San Bernardino and Orlando slaughters. But we have no template for the impact of an attack just before an American election.

After some analysis and noting that ” many of the Republican Party’s national security mandarins have declared Donald Trump unfit for office,” he reaches this conclusion:

Against this unflattering backdrop, it’s tempting to say that the hawkish former Secretary of States Hillary Clinton could be in a better position to benefit if, God forbid, terror attacks continue through the election. After all, she has a demonstrated record on national security and far more detailed policy proposals on how to deal with ISIS, (which admittedly isn’t hard given Trump’s laughable talk of a “secret plan” to the win the war.)
But sexism impacts negative perceptions of Hillary Clinton just as racism fueled many of the unhinged criticisms of President Obama, especially the Birther conspiracy theories that Trump did so much to pump up over the past five years. We have no national template for a Golda Meir-type leader in our country. There will be many who are susceptible to the idea that an older woman can’t possible be as tough on terrorism as a blustery old man who loves to declare that he’ll “bomb the shit” out of ISIS. “Strong and wrong” leaders have real emotional appeal during times of crisis. The certainty of the demagogue can be more compelling than the sober strategies offered by statesmen and stateswomen.
As we get more information, it may be that these incidents are not connected with terrorism but the ensuing drumbeat of anxiety only adds to Trump’s desire to declare himself a prophet who warned about terrorism and immigration before it was cool. This all falls into his fear-based wheelhouse.
Terrorism is one of the defining fights of our time. But terror, of course, is designed to elicit fear and change policy and behavior in ways that benefits terrorists. We unfortunately know that a precedent exists for terrorists impacting a western government’s elections. We’ll need to steel ourselves and hope that Americans vote with their head as well as heart on November 8th.

Read his column in full.

I have long felt a multi-fronted terrorist attack before the election could shift it to Trump. And the odds would be particularly enhanced if these “October surprises” happened:

1. More damaging email leaks (with some outright doctored or false ones peppered in the batch so they are particularly damaging and can’t be quickly disproven) against the Clinton campaign, Clinton or Democrats, courtesy of Mr. Putin, Wikileaks and cheered on and touted by Trump, broadcaster Sean Hannity, other members of the conservative entertainment media, pro-Trump bloggers and others.

2. The continued decision by some Bernie Sanders supporters to teach their party a lesson and vote for a third party (just as many voted for Ralph Nader in 2000 to register disgust with Democrat Al Gore, then spent 8 years complaining about the Bush administration) or argue that there’s no difference between Trump and Clinton (PSST: there are differences).

3. An inability of Clinton to re-assemble the Obama winning coalition.

4. Republicans continue to rally to support Trump, basically discarding the party’s new positions. With RNC chairman’s recent threat to punish 2016 Presidential candidates who aren’t endorsing Trump, and the party’s Congressional leadership endorsing him, the Republican Party is already now effectively the Trumplican Party. But if Republicans increasingly come home and Democrats don’t, ir will be felt at the polls.

However, perhaps the October surprise will be this:

It’ll turn out that Donald Trump died years ago — and all along this has been Andy Kaufman.