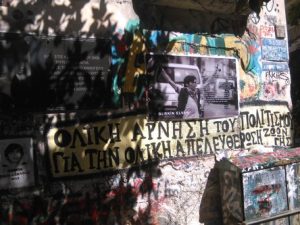 In the 1980s, the European Commission developed an ambitious research program whose goal was the investigation of the future of the European Union and had as its title Forecasting and Assessment of Science and Technology (FAST). Many research projects came of this, sometimes in relation to one theme or problem (e.g., employment), sometimes in reference to an approach (e.g., assessment), and sometimes in the search for new policies, not merely within the framework of Europe but also of the globalizing world. (I was personally the coordinator of a particular European group addressing the theme of art and technology; see Agrafiotis 1991.) Thousands of pages were produced and many meetings took place addressing the processing and dissemination of the results. Theoretically and methodologically, new proposals were formulated that were meant to be contributions to the following areas: Foresight (προοπτική διερεύνηση); Forecasting (πρόβλεψη); Assessment (στάθμιση); Evaluation (αποτίμηση); and Review (αξιολόγηση).

Among many other issues engaged was the scientific adequacy of the theory and methodology of Assessment and Forecasting for the Europe of the time. A working group of experts from different European countries was put into place. (I was a member of it.) It dedicated itself to assessing studies, articles, research reports, and books written concerning Assessment and Forecasting and ultimately to synthesizing them. Our analysis discerned no reference to the probable fall and dissolution of the Soviet Union, even though the processes of the deregulation of the Soviet bloc had begun in 1985 and culminated in its official dissolution on December 26, 1991. With the publication of the report (Agersnap et al. 1990), the cultural blindness of the so-called specialists came to light. In essence, the actual unfolding of historical events very seriously undermined the scientific reach and validity of Assessment and Forecasting. There were exceptions, to be sure. The work of the anthropologist, historian, and journalist Emmanuel Todd (1976), whose studies of the deterioration of the indicators of public health from 1976 forward forecast the fall, subsequently became well known. So, too, did the work of the Russian Andreï Almarik (1970), who posed the question of whether the Soviet Union could even endure beyond the temporal bounds of 1984.

For about six years now, Greece has lived in the rhythm of crisis, and crisiology has increased in scope and speed. By analogy with what has already been said about the Soviet Union, the question must be posed of whether there were studies that forecast the coming of the crisis, and if so, why they didn’t prevent still another episode of cultural blindness.

At the beginning of the 2000s and in the aftermath of FAST, all of the member states of the European Union decided to devote themselves to research grounded in the epistemological presumptions of Foresight (concerning its general principles and especially its rejection of the possibility of predicting the future, see https://en.wikipedia.org/wiki/Scenario_planning), setting 2020 as a horizon and adopting the hypothesis that science and technology would be the motive forces of variation and reclassification of Europeans individually and collectively. In the case of Greece, the financing of the research came chiefly from the European Commission and 2021 was chosen as the milestone in relation to the revolution of 1821. Greeks expected—even to the point of obsession—that science, technology, and innovation would lead to a rebirth or revolution similar to the previous ’21 (Chletsos and Agrafiotis 2014).

Our final report (Agrafiotis et al. 2005) and the book that followed it (Chletsos and Agrafiotis 2014) provide all of the information concerning our organizational plan, our hypotheses, our methodological choices, and the results at which we arrived. It should be kept in mind that we made use of what was (then) the final iteration of the Foresight approach, which mandated collective collaboration and the formation of scenarios at multiple levels, under these axioms: first, that we are not forecasting but are preparing for (and being prepared by) the future; second, following the scenarios, that social stakeholders could articulate ideas about and solutions for issues and problems that they would encounter in the future.

Four scenarios ensued from our efforts: the garden; two rates or enclaves of differentiation; competitive-liberal; and not least, catastrophe-crisis/instability and mass danger. Each scenario offered a description of Greece of diverse dimensions: institutional, administrative, political-economic, entrepreneurial, societal (values, models, behaviors) and those concerning research, technology, and innovation. The fourth scenario details risks (geopolitical, technological and natural) and underscores the “dissolution of the Greek economy” (Chletsos and Agrafiotis 2014, 60–61). The terms and the conclusions of the research were presented in public gatherings in 2004 and 2005. Our study stands alone in developing a scenario of what is now widely known as the Greek crisis.

The question immediately arises: What are the factors, the causes that resulted in this deliberate, unconscious, or even willful collective blindness? What follows are several working hypotheses, triggers for further research.

Undoubtedly this presentation of the obstacles to a substantive reading of the final compilation and to the recognition of Foresight as an instrument of collective initiatives and innovations is highly selective. Even so, it showcases that contemporary Greek society avoids fashioning mirrors in which to reflect on its course and to undertake long-term prospection. The fact is that it leads to oversights, vague targets, and mistaken priorities—that it to say, to politico-cultural blindness.

This essay was translated into English by James D. Faubion.