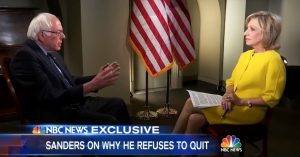 The interview with NBC’s Andrea Mitchell was Bernie Sanders’ first since the New York primary on Tuesday. (Screenshot)

Bernie Sanders acknowledged in an exclusive interview with NBC News on Thursday that he faces “a hard path” to win the Democratic presidential nomination—but maintained that he’s up to the challenge, asserting that “the people in every state in this country have the right to vote for the agenda that they want.”

“It’s not unrealistic,” he stressed, but “it’s a hard path, I admit that.”

“Look, if we do not have a majority, it’s gonna be…hard for us to win,” Sanders told reporter Andrea Mitchell in his first interview since losing the New York primary to rival Hillary Clinton on Tuesday. “The only fact that I think remains uncertain is if we continue to be running significantly stronger than she is against Donald Trump, or whoever the Republican nominee will be. I think that’s a factor.”

“I think there are a lot of Democrats out there who are scared to death—as I am—about the possibility of a Trump presidency,” Sanders continued. “And the Democrats, by and large, want to see the strongest candidate possible to take on and defeat Trump or some other Republican. At this point, according to virtually all of the polls, that candidate is me.”

Mitchell then asked: “Will you help persuade your young followers, if [Clinton] wins the nomination, to follow her the way she campaigned for Barack Obama?”

“Well, first of all,” Sanders responded, “I’ve got to find out what her platform is, what the views are that she is going to be bringing forth, to what degree she will adopt many of the ideas that are extremely popular and I think, very sensible.”

“But, it is again, a two-way street,” he continued. “I want to see the Democratic party have the courage to stand up to big money interests in a way that they have not in the past, take on the drug companies, take on Wall Street, take on the fossil fuel industry and I want to see them come up with ideas that really do excite working families and young people in this country.”

Asked if he had “any thought” about getting out of the race before the Democratic National Convention in June, Sanders responded quickly: “No.”

The next states to vote for their presidential preferences are Pennsylvania, Maryland, Rhode Island, Delaware, and Connecticut, which cast ballots on Tuesday.

A poll released Friday from Indiana, which holds its open primary the following week on May 3, shows Clinton holding onto a narrow, 3-point lead over Sanders.