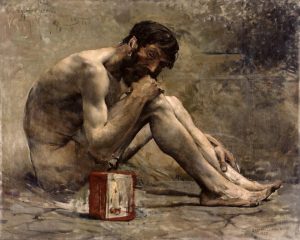 Twenty years had taken their toll. I hadn’t seen Andy since our high school reunion. At first, I barely recognised him. There was more of him than I remembered. His face was broad, carved with crevasses of flesh. The hams and T-bar shoulders that had made him a star on the rugby field now hefted an imposing gut. His hand absorbed mine, pumping fiercely. He seemed to have swelled in size, as if his whole body were inflated with air.

If the suit didn’t give it away, you could tell from his manner that he’d done well for himself. Andy had done a bit of everything. Five years’ work in the WA mines had set him up to make some smart investments. Andy was a ‘self-made’ man, with a dozen businesses behind him and two failed marriages along the way. These days he worked as a consultant to the coal industry (‘Carbon budget, my ass’, he said. ‘The stuff’s in the ground, it’s coming out’). He liked how the Asians partied with a bottle of whiskey on the table. We bonded over shots at the bar, but the more we talked, the more the years yawned like a chasm between us.

He laughed when I told him that I was a philosopher. ‘So am I’, he said. ‘I’m a professional cynic’.

Cynicism used to be a dirty word. When Andy and I were kids, we wouldn’t have thought of affirming it. To be cynical means to be distrusting of people’s motives and dismissive of their good intentions. Only a fool would want to try to change the world. Cynics are convinced that everyone operates out of self-interest. Given this state of affairs, the only smart response is to take care of number one. In business life, cynics are distinguished by a ‘me first’ mentality. They don’t care much where they make their money. If the money’s easy, it’s good. Often, you’ll find them working for pariah industries like coal and tobacco. They are working for a broken system, and they know its going nowhere, but they’re riding the gravy train to the end.

I am troubled by the easy affirmation of cynicism in contemporary life. To my mind, the fact that successful people like Andy know that things are getting worse; also that aspects of their existence are helping things to get worse; yet think the matter is out of their hands, that it is beyond their power to do or change anything, so they may as well be cynical – this amazes and upsets me. ‘Pretty stupid not to be cynical, these days’, Andy laughed when I pressed him on the issue. ‘Take it from me, mate, it’s a pack of dogs out there’. He squared his shoulders and knocked my glass with his drink. ‘Chi-ching’. Same old Andy. Yet something had changed – I could see it in his eyes. It was a flicker of fear. Our conversation was taking him places that he rarely went. Difficult places. His cynical philosophy gave him license to live the way he wanted. But did it allow for journeys of the mind? Did the old school battler have the courage to think? 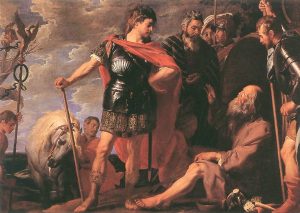 Cynicism wasn’t always a dirty word. Before it became an objectional ideology (and cop out), Cynicism was a school of philosophy. The school was founded by Diogenes of Sinope (412 or 404 BCE – 323 BCE) in Athens, Greece, in the third century BC. It was a hugely controversial style of philosophy, and yet also hugely influential, having a tremendous impact on the Stoic and Sceptic schools that emerged in the decades after.

Cynicism was devoted to the courage to think. We must understand that thinking wasn’t something respectable people did back in ancient times. Socrates amazed people for the way that he would stand still in the middle of the street and stare into the distance, sometimes for hours (‘What are you doing, Socrates?’ ‘I am thinking’). It pays also to remember that Socrates was executed in 399 BC for having the audacity to think (the actual charges were impiety to the gods and corrupting the youth, but they were flimsy as a fig leaf in the breeze). It was a courageous thing to step out in public as a philosopher in the third century BC, as Diogenes did in when he starting practicing Cynicism on the streets of Athens.

Diogenes firmly believed two things: first, that society was corrupt; and second, that virtue was best demonstrated in practice. In the first respect, Diogenes’ point of view was perhaps not dissimilar to many contemporary cynics. People tell lies to themselves. They entertain self-serving fantasies that justify lives of material gain, while they destroy their health and peace of mind by glutting themseves on food and wine and worrying incessantly about the future. But Diogenes’ response to this state of affairs distinguishes his teaching from contemporary cynicism. Rather than simply resign himself to the state of the world, Diogenes sought to lead by example. Leading, he insisted, was doing, not talking. While other philosophers of the day, following the examples of Socrates, Plato, and Aristotle, formed research groups and symposia, devoting themselves to discussing the principles of the good life, Diogenes went out to live it. He wanted to dive in and taste the good life and show how it was done. Not everyone was convinced that he was on the right track. But Diogenes offered an example – an example of a way of life that was thoroughly different from cynicism as we understand it today. In many respects, these forms of life are polar opposites. 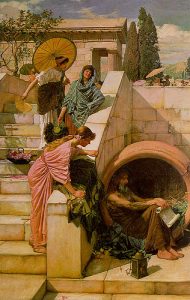 Diogenes believed that happiness could be achieved through radical simplicity. ‘Humans have complicated every simple gift of the gods’, he argued. We need to pare back the clutter and complexity of life to rediscover the simple gifts that nature affords us, such as our health, freedom, and reason, the power to think and reflect on things, which for Diogenes was the greatest gift of all. Diogenes took asceticism to an extreme. He threw away his possessions and took to living on the streets of Athens in a wine tub. When he saw a boy drinking water out of his hand, he threw away his cup, grumbling at how he had lived so long only to learn wisdom from a child. Wisdom, for Diogenes, was a practical thing. Diogenes argued that we want to be happy, we should learn to find joy in simple, practical, matters, the bare necessities of life.

Diogenes’ may have lived like a monk, but he was no saint. Far from it. In many respects, the Cynics behaved like dogs (indeed, this is how the school got its name, kynikos meaning ‘dog-like’ in Greek). Diogenes and his followers would eat, urinate, deficate, and masturbate in public. When accosted for pleasuring himself in the crowded marketplace, Diogenes protested: ‘You rub your stomachs when you are hungry. How different is it to satisfy this other bodily urge?’ Many people (philosophers included) thought that this was madness. But Diogenes was on a moral mission. He wanted to shock polite society out of its complacency. He would stride about the city in the middle of the day with a latern thrust before him. Holding it in people’s faces, he would say that he was looking for an honest man.

You say that you are living well, but are you living honestly? What would it mean to be true to yourself, to really celebrate human nature? Diogenes didn’t have all the answers, and he may have made a few wrong assumptions. But Diogenes had the courage to devote himself to these questions. He risked everything in order to grant himself the liberty to think.

This is where I think we can learn something from Diogenes today. We may question whether giving up all our possessions and waging war against polite society is really the way to happiness. Yet there was a method to Diogenes’ madness. Diogenes’ stunts were, effectively, character-building exercises. He conceived his philosophy as an askesis, or training, with the end of enabling him to sustain a truly philosophical existence. By learning to live without fear, without shame, without the kinds of needs and desires that most people have, or care for social status and the positive estimation of others, which most people crave, Diogenes forged a powerful independant spirit, which is necessary for original thinking. Pushing back against the norms of society, Diogenes create a zone of independance, and thereby gave himself the freedom to think, do, and be precisely what he believed it was important to think, do, and be.

Part of this involved rejecting political power. In the ancient world, earning the favour of a patron, or securing a job as a tutor to an aristocratic household, was about the only way for a philosopher to earn a living. Plato started a school catering to the aristocratic youth. Aristotle was employed as a tutor by Phillip of Macedon, charged with educating Alexander, his son. The Cynics, however, refused to be compromised by the lure of money, influence, and power. They had a fervent distrust of all forms of power. Legend has it that one day the aforementioned Alexander saw Diogenes sunning himself on the street. Alexander, who was by this point the most powerful man in the world, was struck by Diogenes’ condition, and asked: ‘What can I do to help you?’ ‘Step out of my sun’, Diogenes replied. Alexander, surprised but impressed by the mans’ audacity, remarked: ‘If I were not Alexander, I would want to be Diogenes!’ Diognese retorted: ‘If I were not Diogenes, I would want to be Diogenes too’. Hardly the way to earn a place in the Emperor’s court.

Plato, of course, wound up being the most famous and successful philosopher of ancient times. Diogenes is a laughing stock. Yet he still has things to teach us. Fundamentally, Diogenes reminds us that a happy life is an authentic life, and authenticity requires integrity. Too often, in our quest to secure the social and material conditions for happiness, we sacrifice our integrity, allowing ourselves to be shaped and moulded by the values and opinions of others, if only to ‘fit in’ and ‘be part of the team’. It take courage to be an individual, and self-discipline too. If you want to be a person of genuine character – someone who others look up to and take as a leader – you need to cultivate a zone of independance in your life, and grant yourself the freedom to be who you are.

In the present age, which seems forever to teeter on the brink of some kind of calamity, Diogenes’ teachings are more valuable than ever. When things fall apart, people lose their nerve. They become cynics in the shallow, self-interested, sense, jaded nihilists concerned only for personal gain. Diogenes reminds us that this is not the way to happiness. We can enjoy a happy life in any kind of society so long as we learn to make do with less. Happiness comes from within. We can sustain it by shielding ourselves from foolish, false beliefs, by rejecting paths of power that fill our lives with needless worry and anxiety, and by learning to find joy in the simple things in life.

Cultivate Cynic simplicity. Have the courage and the freedom to think.