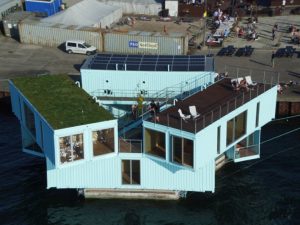 Urban Rigger, a housing and architect firm in Denmark, has come up with an eco-friendly way to provide affordable and comfortable accommodations to cash-strapped students living in big cities. Their innovative “container dorms” are made up of modified shipping containers floating on a platform in urban harbors.

For many students, having to save money for rent every month is one of the most stressful aspect of their lives, but for a few hundred lucky youths studying in Copenhagen, things are about to get a lot easier. Urban Rigger hopes to ease the financial burden on students by building ingenious modular container homes that only cost $600 a month. In the Danish capital, that’s practically a steal.

The idea for these container dorms came about when Urban Rigger co-founder Kim Loudrup started looking for an affordable place to stay for his oldest son and realized the rents were obscene. “My oldest son needed a place to live when he was going to university,” he told Fact Co. Design. “When we went online to see the availability for student housing somewhere close to us, it dawned on us that it was a nightmare.” So his company teamed up with Danish architecture firm Bjarke Ingels to come up with a cheaper alternative. 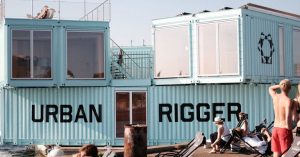 The two companies decided that shipping containers made the most sense when building modular apartments that are both affordable and comfortable. Each of the their units is made up of three shipping containers which offer enough space for upward of 12 students at the same time. The dorms are insulated with ultra-light aerogels developed by NASA, powered by solar-energy, and are equipped with mobile app-operated laundries. 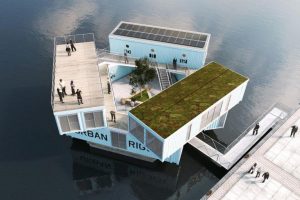 After doing some research, Urban Rigger found that in 80% of European cities, universities were located near the city center, so they needed to position their apartments somewhere close and at the same time cheap. Their research also revealed that many cities in Europe feature port areas near the urban core, so they decided to make their container apartments buoyant. 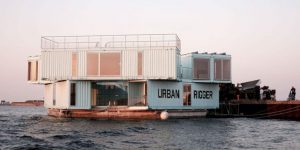 “Most major postindustrial cities in the world are experiencing some sort of a transformation and decline of their port industries,” a spokesperson for Bjarke Ingels said. “You’re seeing cities all over the world where you actually have increasingly available port areas that can be transformed and could be the home for alternate forms of urbanization. You have a declining industry that makes and moves containers. So what we’re suggesting is to inject new life into it.” 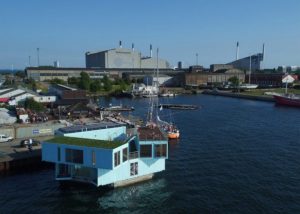 The unique location of the apartments allowed the architects to include special features, like a bathing platform and kayak landing, while the floating platform upon which the container dorms are installed offers plenty of room for a courtyard and BBQ area. 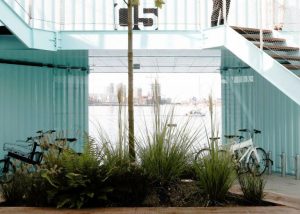 The first container dorm prototype was recently unveiled in Copenhagen’s port, and Urban Rigger says it will be move-in ready next year. The company is already working on another 20 units (240 apartments) to be placed in other cities across Denmark, and 24 units (288 apartments) for Sweden.

The unique location, cheap rent and attractive features of these container dorms have attracted attention from all over the world, with Urban Rigger claiming that it has received inquiries from over 30 countries in North America, Europe and Asia. It plans on building 12,000 to 18,000 container dorms in the next 10 years.