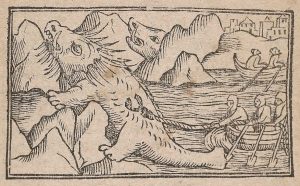 Amongst the assorted curiosities described in Olaus Magnus’ 1555 tome on Nordic life was the morse — a hirsuite, fearsome walrus-like beast, that was said to snooze upon cliffs while hanging by its teeth. Natalie Lawrence explores the career of this chimerical wonder, shaped both by scholarly images of a fabulous north and the grisly corporeality of the trade in walrus skins, teeth, and bone.

To the far north, on the coast of Norway, there lives a mighty creature, as big as an elephant, called the walrus or morse, perhaps so named for its sharp bite; for if it glimpses a man on the seashore and can catch him, it jumps on him swiftly, rends him with its teeth, and kills him in an instant.

A woodcut of a four-footed, boar-tusked, thickly-whiskered creature clinging to a cliff-face accompanied this description of the rosmaroor morse in Olaus Magnus’s Historia de Gentibus Septentrionalibus (A History of the Northern Peoples, 1555). The Swedish Ecclesiast had never himself seen such a fearsome beast, but as part of an exercise in the marketing of marvels, the accounts of other respected scholars were, it anything, of rather more value. They certainly allowed Magnus to create a more fantastical product, which could only suit his aims better.

The de Gentibus built on Magnus’ lavish Carta Marina (1539), one of the first and most spectacular maps of the north to be published. Across the land masses are depicted the strange peoples, unusual creatures and odd land formations Magnus described in his text: hunters spearing bear-like seals on the ice floes and women milking reindeer, whilst fires belch from the cavernous pits of “Islandia” and fierce tribes war with each other across the ice. The seas are filled with ferocious sea beasts disporting themselves, sending great water-spouts into the air, writhing around ships, and playfully mauling one another. 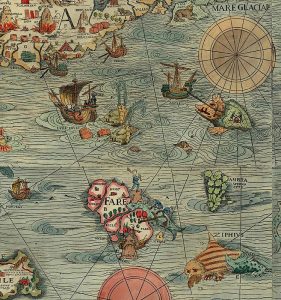 These images were largely the fantastical products of generations of scholarly minds. Magnus wanted to present the North as an impenetrable region of wonders and marvels — flesh-eating Scricfinns, magicians, vast whirlpools, and flaming volcanoes — at the very edge of the known world. Importantly, he wanted to portray wonders that were resonant to an audience in Catholic Southern Europe. He needed support from the church against the threat of Protestantism that encroached from vocal Protestant clerics. Bringing his neglected corner of the world to the attention of the Catholic powers in the South was Magnus’ way of demonstrating that it was a part of God’s realm worth protecting. To do so, he used practical, local information, but, ironically, also based much of his description on classical scholarship and Southern European perceptions of the north. He was re-igniting images of the “septentrional lands” rather than generating them: selling mythologies back to the traditions that had created them.

The morse was one such arctic wonder. Magnus went on to relate how:

Using their tusks, these animals clamber right up to the cliff-tops, as if they were going up a ladder, in order to crop the sweet, dew-moistened grass, and then roll back down into the sea again, unless, in the meantime, they have been overcome with a heavy drowsiness and fall asleep as they cling to the rocks.

Hunters would sneak up on the napping behemoths, tie ropes around their tails, and, from a safe distance, wake the animals with a hail of stones. The startled morses, flinging themselves into the ocean to escape, were stripped of their valuable skins, and, weakened by loss of blood, became easy prey for the hunters.

Magnus acquired this image from a long lineage of cliff-top snoozers. The Catholic Bishop, Albertus Magnus had described in his De Animalibus (1250), “hairy whales” with “the longest tusks” by which they “hang from the rocks of cliffs when they sleep”. In order to catch them:

…a fisherman, coming close, separates as much of its skin as he can from the blubber near its tail. He passes a strong rope through the part he has loosened and he then ties the ropes to rings fixed into a mountain or to very strong stakes or trees. Aroused, the fish, as it tries to escape, draws off its skin from its tail down along its back and head and leaves it behind… it is captured in a weakened state, either swimming bloodless in the water or lying half-alive on the shore…

In the early sixteenth century, a Polish diplomat, Maciej z Miechowa, had described the “mors” that climbed cliffs with its long teeth1 and the Scottish historian Hector Boece had described “an grete fische” in the “Orknays” that was bound by the tail while asleep, and died from its wounds while struggling to free itself.2 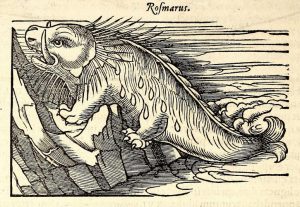 The walrus was a relatively unfamiliar creature in sixteenth-century Europe, despite the fact that walrus parts had been circulating for hundreds of years through trade with Greenland, Iceland, and Russia. The medieval Lewis chessmen, featuring shocked-looking bishops and terrified pawn soldiers gnawing at their shields, were made from walrus tusk during the twelfth century. This trade was reflected in the European names for the walrus. The name, morse, was borrowed from the Russian and Lapp name morsz, whilst the Scandinavians and Dutch used Rosmarus and Walrusch, probably derived from the Old Norse hvalross (hairy whale).

One illustrious piece of walrus to make its way south in the sixteenth century was a head sent to Pope Leo X in 1521 by Bishop Walkendorf of Trondheim. On its journey, it was painted by an artist in an effigy on the wall of Strasbourg town hall, accompanied by a poem:

In Norway they call me “walrus”,
But I am “cetus dentatus”.
My wife is called Balaena.
I am well known in the Eastern Sea
I make mighty thunder in the sea…
To battle and fight is nothing to me,
One finds many thousands of my comrades…
…Had I lived my life to the full
I would not have devoted it to whales.
The bishop of Nidrosia had me stabbed on the shore
The Pope Leo had my head sent
To Rome where many men saw me.

This doleful lament from a slain whale-husband, is a rare personification of an animal about which few people in Europe were very certain. In the same year, perhaps this very same walrus head was subject of a sketch by Albrecht Dürer, who at the time was travelling the Netherlands making and selling prints and drawings. 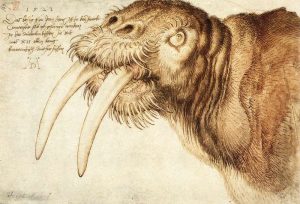 Tusked amphibious beasts, that may or may not have been based on walruses, existed in various sixteenth-century scholarly works. Some of these harked back to classical authorities: Pliny had described a “sea-elephant”, with which the Arctic beast sometimes became identified. Disentangling circumstantial similarity and actual representation is not easy. The elephant-like “morsus” represented on the 1516 world map of Martin Walderseemüller, was most probably the result of such confusing names and a mainland trade of mammoth teeth through Russia. 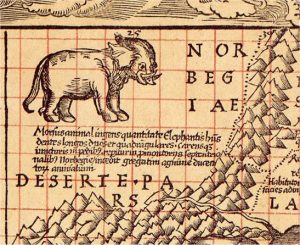 The “morsus”, from a detail of Martin Waldseemüller’s Carta Marina (1516) / Library of Congress

Once Europeans began hunting walruses in the Arctic themselves in the late sixteenth century, however, undeniably walrus-like creatures began to appear in natural histories. This wasn’t a simple process of “discovery” of walruses. Nobody except the hunters who killed walruses on the Arctic ice saw living walruses: carcasses were immediately channeled through the marketplaces of Northern European shores, into apothecary shops, curiosity cabinets, and natural histories. Walrus hides were carted off to the tanners, the ivory and bone sent for carving into combs and knife handles, or ground up. The blubber was rendered into soaps, lamp fuel, or cooking oil. Tusks and penis-bones were sometimes gilded, carved, and polished for luxury sales to curiosity collectors.

Apothecaries placed ground-up walrus tusk for sale alongside other exotic and costly medicinal substances: walrus ivory was often billed as possessing similar qualities to “unicorn horn”, a traditional panacea against all poisons. “Unicorn horn” could itself, in reality, be any of a number of powdered, osseous things, from narwhal or walrus tusks to elephant bone. As long as the apothecary was of good repute, nobody would be any the wiser. They certainly weren’t going to be protected from poison, whatever species the powder contained. 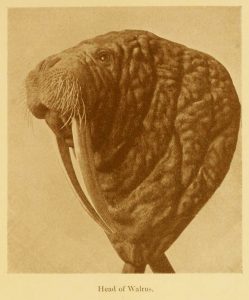 Photograph of a walrus head, from Records of Big Game: with their Distribution, Characteristics, Dimensions, Weights, and Horn and Tusk Measurements (1910) by Rowland Ward / archive.org

Walruses were physically and metaphorically dismantled and reassembled; cut up into transportable parts by hunters and put back together in various guises by scholars, who constructed their very own walrus-creatures from walrus artifacts and older textual accounts. These quasi-mythical images had lives of their own. Magnus’ image of narcoleptic cliff-hangers was particularly long-lived. Parts of walrus images were also broken up and scattered into other depictions. Imposing, walrus-like tusks or bristly manes were featured by many cartographic denizens of treacherous oceans. Elements of the morse were used in depictions of monstrous sea-beasts such as the “sea-pig”, “sea-boar”, “sea-wolf” and “sea-lion” in various books of monstrosity.

There were, in fact, a number of first-hand accounts from hunters published in this period describing the slaying of hundreds of “see-horses” on the Arctic ice, heroic battles with enraged and red-eyed creatures in the waters, followed by the heavy work of flensing (skinning) and dismantling the slain creatures. But very few scholars seemed interested in these kinds of images of what a walrus was, preferring the monsters depicted in more authoritative, erudite accounts. One of the most important was by the prolific Swiss naturalist, Conrad Gessner, in his Historiae Animalium (Vol.IV, 1558). Gessner worked to weave all the material he could find on anything remotely walrusy to construct the most complete account of this creature, including Magnus’ description. 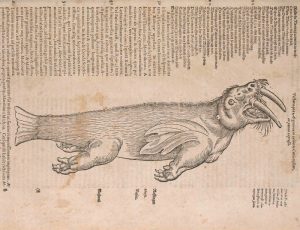 Gessner cast a skeptical eye over his sources: he was less than certain of the accuracy of Magnus’ fantastical account, while the finned and four-limbed image from the Strasbourg town hall image was clearly an extrapolation, having been produced from a severed head. The walrus existed only as a scattered set of body parts and imagery, insufficient material for Gessner to determine the creature’s nature, even had he wanted to. Which he probably didn’t. Just like Magnus’ northern wonders, monsters that retained an air of intangible mystery sold rather well to the markets of curious punters. Gessner’s account was exhaustive, but did not provide a definitive “walrus”.

It was only in 1612 that a whole, living walrus was brought to mainland Europe. A walrus pup arrived in Amsterdam, along with the stuffed skin of its mother on a Dutch hunting ship. It was described by Dr Everhard Vorstius of Leiden University, as a “sea-beast…much like a seal” with holes for ears and a bristly beard. This small animal “roared like a boar” and was placed in a barrel of water to relax. He was fed porridge oats, at which he sucked slowly and grunted as he ate. Vorstius finished with the ominous mention that the walrus’ fat was rather “toothsome”.

This porridge-slurping pup was co opted into the roster of morse images in later descriptions, but sat awkwardly with the fierce-toothed behemoths. It certainly did not replace them: they were far too powerful and too resonant with traditional preconceptions of what the Arctic must be like. The walrus remained a nebulous beast from an intangible and wonder-filled north, long after Magnus purported to reveal its secrets.