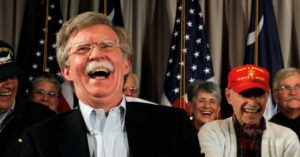 Donald Trump’s withdrawal of the United States from the Iran nuclear deal only serves the interests of the radical conservatives in Iran.

President Donald J. Trump has consistently engineered chaos inside the government and within the American society in order to establish norms and rules that befit his personality and limited appreciation of international and domestic politics. Many in the American political realm betted on the “grown-ups” in his cabinet to tame him and console the public; however, he has quelled all efforts. Through it all, Trump has sought to be true to the character he campaigned on and surrounded himself with individuals who are beholden to him. Most recently, he has appointed hawkish individuals who are to the extreme right of the American political spectrum.

John R. Bolton will become the new national security advisor to President Trump. Bolton defended the 2003 American invasion of Iraq and continues to defend it, although the president himself is one of the harshest critics of this military adventure. Bolton has pushed for a preemptive strike against North Korea and has long been in favor of bombing Iran with the intention of changing the regime in Tehran. He is vehemently against the Joint Comprehensive Plan of Action (JCPOA), informally known as the Iran nuclear deal, signed between Iran and the United States, Germany, France, England, China and Russia in 2015. The Security Council at the United Nations supported and sanctioned the agreement by a vote of 15-0. Iran has complied fully with the agreement since its inception in 2016.

The United States’ chief negotiator of the agreement, Wendy Sherman, wrote: “Since going into force in 2016, that deal has blocked Tehran’s path to a nuclear weapon and prevented a nuclear arms race in the Middle East. By every account, Iran is complying with the agreement, has committed to never obtaining nuclear weapons and has subjected itself to rigorous monitoring and verification.”

Bolton is also an ideological partner and supporter of Mujahedin-e Khalq (MeK), an Iranian opposition group and a terrorist organization that traitorously fought alongside Saddam Hussein against Iran in the Iran–Iraq war. For decades, the group had a compound in Iraq’s Diayal province, which was supported and protected by Hussein. For many years, the group was on the US State Department’s terrorist organizations list because it had killed many American citizens. In 2012, Bolton and others successfully lobbied for the removal of MeK’s terrorist designation.

In the past, Bolton has offered extreme arguments against and has expressed excessive skepticism about various international institutions, including the United Nations. He is for a unipolar world in which the United States is militarily superior and leads the international community, and believes that the United States alone can manage international order. George Will, a well-known conservative thinker and writer, argues that Bolton perceives the United States as having the power and ability to determine which countries in the world can or cannot have nuclear weapons. The United States, according to Bolton, must rely on military might to lead and establish order.

John Bolton, as the new national security advisor, and Mike Pompeo, as the new secretary of state, are the two most hawkish figures in Trump’s cabinet, as they both share similar views on Iran and the nuclear agreement. Trump’s selection of Bolton and Pompeo will surely affect the fragile relations between Iran and the United States and threaten peace and security in the Middle East. Of late, the president and his increasingly hawkish cabinet have decided to terminate JCPOA without careful consideration of its ramifications internationally or the detrimental influence on the domestic politics of Iran.

On March 26, 2018, more than 50 American retired military officers and diplomats enumerated 10 reasons for which they believe it is in the best interest of the United States to preserve the nuclear deal. Iranians have decided to keep JCPOA even if the United States will attempt to rescind it. Amid growing uncertainty about US-Iran relations, Tehran has been contemplating various responses to the United States’ decision. In the worst-case scenario, Trump can abrogate the agreement and reimpose previously waived secondary sanctions.

A lesser decision would be to withdraw from the agreement but not seek to enforce any nuclear-related sanctions. In the first case, Trump would likely jeopardize United States’ trans-Atlantic relationships, which consequently does not serve the interests and the international standing of the United States while at the same time making any nuclear agreements with the North Korean government much more difficult.

The majority of those following the issue of US-Iran relations are concerned about the potential impact on international peace-building efforts while ignoring the undoubtedly consequential impact of Trump’s injudicious decision on Iranian domestic politics. The withdrawal of the United States from JCPOA will have a tremendous negative effect on Iranian domestic politics. Initially, the nuclear agreement with the West divided the reformers (eslahtalaban) and the radical conservatives (mohafezeh karan rastgara) inside Iran, and this political division has continued today. The reformers backed the presidency of Hassan Rouhani, who committed himself to pushing for a nuclear agreement with the West.

This battle between the two political sides continued and formed the nucleus and the essence of Iranian politics today. Under the pressure of the reform movement, Iran has taken precarious, but meaningful, steps in establishing a civil society (though it remains extremely fragile) and has adopted a few infant democratic institutions, including a free (but not fair) election. Radical conservatives, who have enjoyed the support of Supreme Leader of Iran Ayatollah Khamenei, the Revolutionary Guard, the judiciary branch, and who possess enormous economic resources in the country, stood against democratic norms and preferred antagonism against the West.

This antagonistic attitude of the radical conservatives and Ayatollah Khamenei toward the West, and especially the United States, could be understood only in the context of the Cold War and the appetites that communism had developed for dissent and opposition to the West. The radical conservatives and Ayatollah Khamenei in Iran have tried relentlessly to impose a Cold War on Iran against the West and the United States in order to overwhelm a society that continuously fought for reform and democracy.

Understanding this duality in the politics of Iran is not impossible or even difficult. Nevertheless, some in the West with ideological interests have tried to ignore it. Among the millions of reformers who stood for JCPOA are Sadegh Zibakalam and Mostafa Tajzadeh. The former is a university professor and the latter was a member of Khatami’s cabinet. Zibakalam has recently received a two-year jail sentence, while Tajzadeh has served five years in jail and was released last year. Similar to thousands of reformers, they paid a heavy price for being outspoken against authoritarianism in Iran and the policies that ignored the interests of the whole nation.

All reformers, among them these individuals have advocated for a nuclear agreement with the West because they considered international tension an anathema to any efforts for democratic reform and gradual change inside Iran. Trump’s withdrawal of the United States from the Iran nuclear deal only serves the interests of the radical conservatives in Iran and directly plays into the hands of those with authoritarian predispositions who would like to destroy any peaceful and gradual attempts toward inaugurating democratic norms inside the country.

Iranians have already experienced the United States’ disregard and disrespect for the interests of the nation and democratic changes inside the country. In the early 1950s, Mohammad Mosaddeq, a nationalist and democratic leader, was democratically elected to nationalize the oil industry and tame authoritarianism of the Pahlavi monarchy in favor of the rule of law and democratic norms in government. The Americans and the British carried out a coup in 1953, toppling Mosaddeq’s government and paving the way for authoritarian domination over the government and society.

The Iranians have never forgotten the chance at democracy that was stolen from them. Donald Trump and his cabinet of disruption, especially the role that John Bolton could play in shaping American foreign policy toward Iran, will not help Iran’s path toward gradual moderation and democratization. The withdrawal of the United States from JCPOA — a deal that has the support of the international community, the majority in the United States and Europe, and the majority in Iran and all reformers — is not judicious and may help radical conservative right in Iran may push for the model that North Koreans have adopted. Iran will turn toward enrichment as the head of the Iranian nuclear program Ali Akbar Salehi has announced, meaning the West will have to deal with a nuclear Iran in the future. An annulment of the agreement will also undoubtedly harm any attempts at international peace building and disrupt the reformist measures inside Iranian politics in immeasurable ways, once again directing the nation away from democratic values and ideals.

Originally published by Fair Observer and reprinted here with permission for non-commercial purposes.