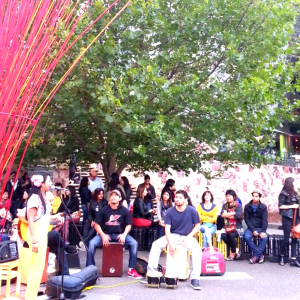 Have you ever had a song playing in  your mind that you just can’t tune out? The social science term for this is “involuntary musical imagery” (IMI) otherwise known as an “earworm.” In this post, I’ll discuss research about IMI, focusing on data from a study by Victoria Williamson and colleagues tracing the “earworm” phenomenon. I end by discussing some gaps in the research, and I reflect on my experiences with earworms.

Much of our thinking happens without our conscious attention. Involuntary thoughts are always running in the back of our brains. These unconscious thoughts happen spontaneously, but they reflect our prior experiences. So why do earworms exist? It turns out that they serve both a functional and a socio-psychological purpose.

Music Non-Stop When I Close My Eyes

Musical imagery is an introspective phenomenon where our experience of music (a melody or our memory of a song) persists without the stimuli (the song) being present. This imagery can be measured qualitatively, such as by having people record from memory the  pitch and rhythm of certain songs. It can also be measured quantitatively, via brain imagery. Brain scans show that neural activity is actually the same whether someone is hearing a song or remembering it.

The involuntary persistence of musical imagery has various names, including “earworm,” “brain worms,” “sticky music,” “cognitive itch” and “stuck song syndrome.” As most of these names suggest, the experience of repetition of music in our memory is subjectively understood to be outside of our control. 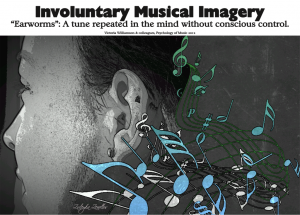 Large studies involving over 12,400 people find that 92% of people experience IMI at least once a week, with a third of participants experiencing it at least daily, and a further 26% experiencing earworm more than once daily. Around 26% of people say this happens with new songs, while the rest report that it’s connected to older songs they know well. Other studies suggest that IMI is more likely to happen when we start to think of particular words.

This suggests the phenomenon of earworm may be a recurring part of daily life. But why? The answer is twofold: First, IMI plays a functional role namely entertainment that breaks up the monotony of everyday routine. Second, is the fulfilment of a social-psychological need of completeness. That is, there is a connection between our individual experience of IMI and what’s going on in our personal lives. 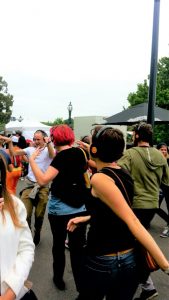 Williamson’s team initially collected over 2,000 reports on earworms as experienced by BBC listeners. Their sample is skewed towards middle-aged men, with an average age of 38, who are largely in professional occupations. In the second phase of the study, the researchers conducted an online survey of over 1,300 people predominantly living in the UK, USA, Europe and Australia. The researchers focused on a sub-set of these reports (271), which had a better gender balance. These participants had an average age of 36, and the majority were highly educated and had played a musical instrument.

The two datasets show that the most common trigger for earworm was recent exposure to a particular song or tune (around 20-25% of both samples). This refers to being repeatedly exposed to a song. One person talks about having earworm over a children’s song they hear over and over because they have a child. One BBC participant made this humorous comment. It reflects the frustration at having earworm when it’s a song you hate:

My bloody earworm is that bloody George Harrison song you played yesterday. Woke at 4.30 this morning with it going round me head. PLEASE DON’T EVER PLAY IT AGAIN!!

The second-most common reason for earworm was association. That is, being in an environment that involuntarily brings a song to mind. This is most often due to hearing a word that is associated with particular lyrics or being in a situation that evokes a memory that is linked to a song. For example, one person sat down to start rewriting a manuscript. This led them to reminisce about how their laptop was stolen, which is why they’d lost the previous draft of their work. Their earworm was Paperback Writer by The Beatles.

Seeing a person or hearing a sound can also trigger an earworm.

To a lesser extent, but much more intriguing, is the memory of an event that can lead to an earworm. This is known as “mental time travel.” This can happen when driving down a particular road that triggers a song loop. Feelings of anticipation, will also trigger an earworm, such when as thinking about going somewhere.

In the Williamson team’s study, a minority of people experienced earworm in connection to particular moods. Being surprised or stressed are two common emotional triggers for IMI. Being in a low attention state such as when dreaming or daydreaming, can also trigger a specific type of earworm that is not directly about the environment you’re in, but rather it’s due to the lack of stimuli in our environment. In the study, there was a great comment by one young scientist who thinks of the K’naan song Waving Flag when she’s in the lab doing a “repetitive task that I am familiar with enough to go ‘on autopilot.’” 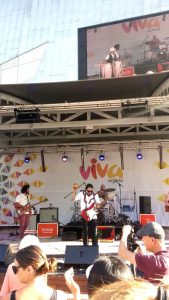 As we see, earworms are not always about hearing a song. Still, where direct exposure to music is a trigger, there are differences in the type of stimuli that will affect an earworm. The BBC sample were more likely to have an IMI experience in connection to remembering or anticipating a live concert, as well as watching videos on YouTube. The survey sample were more likely to be triggered by hearing something on the radio or in another private setting, like at home or at a party.

Another interesting way of “catching” earworm is via contagion. This happens less often, but it occurs when people hear someone else humming or singing a tune. Hearing music in a public place, like at a gym, or on a ringtone, can also trigger earworms.

Over And Over Again 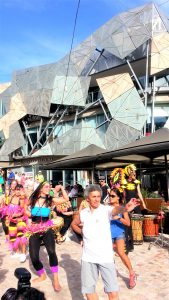 Obvious limitations to Williamson’s team study relate to the subjective measure of IMI and the demographics of two sample groups. Different socio-economic variables are likely to augment how earworms manifest for different sub-groups.

Take for example culture. Being of Latin background and growing up around a lot of music and dancing, and having had most of my social life revolving around dancing, my “positive” earworms are connected to songs I love dancing to. Hearing a word that makes me think of a song I danced at a party or in a club will trigger a massive earworm!

My earworms are also connected to learning experiences, much of which are influenced by word associations. I get earworms when I read, whether it’s a line in a book or an paragraph in a blog post.

My experience of learning to speak English is strongly connected to listening to particular songs. Anything that evokes these early English-language songs I first heard will trigger earworms for me on multiple levels: word association, mood and environment (that is, these earworms are more likely to  happen when I’m with my family and feeling nostalgic). These earworms represent “time travel” for me and trigger other memories, so they are more profound and complex than when I get an annoying song stuck in my head.

Above, I’ve differentiated between “positive” and “negative” (that is, annoying) earworms. Both happen spontaneously but some earworms are welcome as they can cheer you up, while others are a hindrance. The fact that earworms transport us to another time and place suggests they have a connection to wellbeing, identity and socialisation.

It’d be great to see more research done on the mental health benefits and sociability of earworms, such as how they help us bond with other people. I’d also be keen to read more on cross-cultural comparisons of earworms.

Earworms are not simply some frivolous mind loop. They are linked with our memories and how we think of ourselves in relation to others, and so for this reason, IMI research may help us understand other emotive, cognitive and socialisation processes.