As genes are favored or phased out, human evolution continues. ktsdesign/Shutterstock.com

Human evolution can seem like a phenomenon of the distant past which applies only to our ancestors living millions of years ago. But human evolution is ongoing. To evolve simply means that mutations – the accidental changes to genes that happen normally in the process of copying DNA – are becoming more or less common in the population over time.

These changes can happen by chance, because the individuals who reproduced happened to carry a particular mutation somewhat more often than individuals who didn’t have children. They can also happen because of natural selection, when carriers of a specific mutation are better able to survive, reproduce or tend to their family members – and therefore leave more descendants. Every biological adaptation, from the ability of humans to walk upright on two feet to flight in birds, ultimately traces back to natural selection acting on these minute changes, generation after generation.

So humans are definitely still evolving. The question is whether we are still adapting: Are individuals who carry harmful mutations living less long, reproducing less – ultimately leaving fewer descendants? For instance, terrible eyesight may have been a major survival disadvantage living on the savanna, but with glasses and laser surgery, it’s unlikely to prevent people from living a long life today. How commonly then are mutations under selection in contemporary humans?

Because adaptations involve tiny changes in the frequencies of mutations from generation to generation and their fortune plays out over tens to hundreds of thousands of years, they are incredibly hard to study directly – at least in long-lived organisms such as people.

So while there is overwhelming evidence for human evolution and unequivocal footprints of adaptation in the genome, rarely have scientists been able to directly observe natural selection operating in people. As a result, biologists still understand very little about the workings of natural selection in humans.

Indeed, one of the clearest footprints of a past adaptation in the human genome involves a mutation that permits milk to be digested in adulthood. This mutation in the lactase gene rapidly rose in frequency with the rise of dairy farming thousands of years ago, independently in multiple populations. It’s the reason some people can drink milk as adults, whereas most remain lactose intolerant.

But even in this well-studied case, let alone for the rest of the genome, researchers don’t know whether the mutation was beneficial for survival or for reproduction; whether the benefits were the same for both sexes, or across all ages; or whether the benefit depended on the environment (for instance, availability of other food sources). As pointed out by evolutionary biologist Richard Lewontin in the 1960s, to learn these properties of natural selection would require a massive study, in which genetic and genealogical information is obtained for hundreds of thousands of people.

Fifty years later, our group realized that this thought experiment is starting to become feasible. We sought large biomedical data sets that would let us learn about mutations that affect survival.

Our basic idea was that mutations that lower the chance of survival should be present at lower frequency in older individuals. For example, if a mutation becomes harmful at the age of 60 years, people who carry it have a lower chance to survive past 60 – and the mutation should be less common among those who live longer than that.

We therefore looked for mutations that change in frequency with age among around 60,000 individuals from California (part of the GERA cohort) and around 150,000 from the U.K. Biobank. To avoid the complication that people whose ancestors lived in different places carry a somewhat different set of mutations, we focused on the largest group with shared ancestry within each study.

Across the genome, we found two variants that endanger survival. The first is a variant of the APOE gene, which is a well-known risk factor for Alzheimer’s disease. It drops in frequency beyond age 70. The second harmful variant we found is a mutation in the CHRNA3 gene. Associated with heavy smoking, this inherited mutation starts to decrease in frequency at middle age in men, because carriers of this mutation are less likely to survive longer. 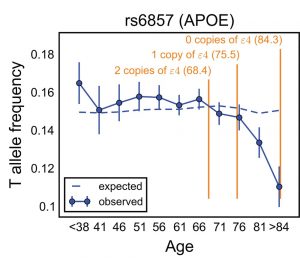 People who carry a variant of the APOE gene die at a higher rate and are less common among the old age categories. Mostafavi et al, PLOS Biology

Both deleterious variants only had an effect long after the typical ages of reproduction for both females and males. Biologists usually consider such mutations to not be under selection. After all, by late middle age, most people have already passed their genes on to whatever offspring they’ll have, so it seems like it might not matter how long they live beyond that point.

Why then would we only find two, when our study was large enough to detect any such variant, if common in the population? One possibility is that mutations that only imperil survival so late in life almost never arise. While that is possible, the genome is a large place, so that seems unlikely.

The other intriguing possibility is that natural selection prevents even late-acting variants from becoming common in the population by natural selection, if they have large enough effects. Why might that be? For one, men can father children in old age. Even if only a tiny fraction of them do so, it may be enough of an evolutionary fitness cost for selection to act on. Survival beyond the age of reproduction could also be beneficial for the survival of related individuals who carry the same mutations, most directly children. In other words, surviving past typical reproductive ages may be beneficial for humans after all. 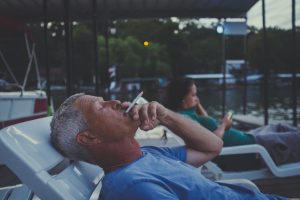 Smokers who carry a mutation in the CHRNA3 gene tend to smoke more cigarettes per day and so are more exposed to harmful effects of smoking.NeONBRAND on Unsplash

Your mutations do influence your survival

In addition to examining one mutation at a time, we were also interested in considering sets of mutations that have all been shown to influence the same trait, and might have very subtle effects on survival individually. For example, researchers have identified approximately 700 common mutations that influence height, each contributing only millimeters. To this end, we considered tens to hundreds of mutations that shape variation in one of 42 traits.

We found genetic mutations linked to a number of diseases and metabolic traits that decrease survival rates: individuals who are genetically predisposed to have higher total cholesterol, LDL cholesterol, risk of heart disease, BMI, risk of asthma or lower HDL cholesterol tend to die younger than others.

Perhaps more surprisingly, we discovered that people who carry mutations that delay puberty or the age at which they have their first child tend to live longer. It was known from epidemiological studies that early puberty is associated with adverse effects later in life such as cancer and obesity. Our results indicate some of that effect is probably due to heritable factors.

So humans carry common mutations that affect their survival and natural selection appears to act on at least a subset, in some contemporary environments. But what is bad in one context may well not be in another; as one example, the CHRNA3 variant has an effect because people smoke. These are early days, however, and our findings offer only a first glimpse of what can soon be gleaned from millions of genomes, in combination with genealogical records. In future work, it will be important to study not only lifespan, but also the number of children and grandchildren individuals leave, as well as populations and environments worldwide.