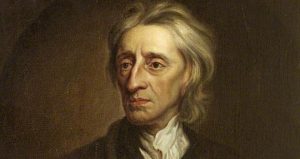 Having explained the origin of our ideas and the use of words to signify them, Locke was prepared to consider the nature of human knowledge. He began with a simple definition:

Knowledge then seems to me to be nothing but the perception of the connexion and agreement, or disagreement and repugnancy of any of our Ideas. In this alone it consists. [Essay IV i 2]

This definition gives rise to an obvious objection: if all human knowledge were wholly concerned with ideas, then it would lack an adequate foundation in reality and there would be no difference between the wise contemplation of philosophers and the fanciful but coherent imagination of the insane. Locke’s response was two-fold: with respect to general knowledge, he boldly defended its detachment from anything other than our ideas, but with respect to knowledge of particulars he tried to show that there is a legitimate cognitive state that “goes a little farther than bare Imagination.” [Essay IV iv 1-2]Actual knowledge occurs only when we are actually perceiving the agreement in question, Locke supposed; our inclination to assent to what we’ve known in the past but are not presently attending to he called habitual knowledge. This capacity is clearly important for the development of learning generally; we can’t focus on everything at once, and it makes sense to rely upon our memories for general truths we have mastered on some occasion in the past. [Essay IV i 8-9] Thus, it makes sense to say that I know (habitually) the multiplication tables even at moments when I’m thinking about other things, provided that I can, upon challenge, call to mind the product of 8 and 7. The more crucial issue about human knowledge is to explain how it occurs in the first place.

No Knowledge is Innate

One account Locke unambiguously rejected from the outset is the supposition that human knowledge is innately inscribed. Noting the remarkably wide-spread agreement of individual human beings in their acceptance of both speculative and practical principles, the innatist argues that universal consent implies an innate origin. Locke’s response was two-fold: He denied the supposed fact of universal consent, supposing this to demonstrate the falsity of the innatist view. What is more, Locke argued that if there were any genuine instances of universal consent, they would more naturally be explained by universal possession of an intellectual faculty or by acquisition through some universal experience. [Essay I ii 1-2]

Granting that if general truths about logic were innately know by all human beings, then they must also be universally accepted, Locke emphatically denied the consequent. If the innatists were correct, then children (and mental defectives) would be the most pure and reliable guides to logical truth; but they are not. [Essay I ii 24-27] Of course the innatist reply to such counter-examples is to suppose that assent to innately inscribed principles is delayed until each individual is able to employ the faculty of reasoning. But why should this be? Either reason is necessary for the discovery of such principles, in which case they are not innately known, Locke argued, or else reason and logic are merely coincidental features of human development, in which case both seem frivolous. [Essay I ii 6-13] Surely, in fact, the use of reason is properly concerned with our assent to general truths.

Locke agreed with the innatists that there is a significant distinction between truths to which we assent immediately upon first framing them on the one hand and, on the other hand, truths that require our careful consideration. But this distinction between self-evident and acquired knowledge, he supposed, doesn’t correspond to the innatist identification of the most fundamental truths. We assent to specific instances at an earlier stage of development than to speculative maxims themselves, and this is most easily explained by the fact that we acquire the particular ideas involved in the former long before we have manufactured the abstract ideas required for the latter. [Essay I ii 14-19] Careful attention to the development of knowledge in individual cases clearly shows it to involve the gradual acquisition of the requisite ideas, perception of whose agreement or disagreement constitutes knowing in each instance.

Locke’s definition of knowledge as perception of the agreement (or disagreement) of ideas clearly indicates two fundamental criteria for acquiring knowledge: first, we have to have the requisite ideas, then we also have to perceive the connection between them. Failure on either of these counts will leave us short of the certainty characteristic of genuine knowlege. [Essay IV iii 1-2] The extended genetic account of our ideas in Book II of the Essay was designed to assist in satisfaction of the first criterion, by helping us to acquire a suitable stock of clear and distinct ideas about many things. But even where our ideas are amply clear, we may fail to achieve certain knowledge if we are unable to recognize the ways in which they are related to each other. [Essay IV ii 15]

Consider, for example, how the two criteria apply to specific areas of possible human awareness: Our passive reception of simple ideas from external objects provides only practical assurance of the existence of the objects themselves, so our knowledge of material qualities and substances is always limited in certainty. But non-substantial complex ideas refer to nothing outside themselves, so any connections we perceive among them are “infallibly certain.” For this reason, as we’ll see later, Locke held that all mathematical and moral reasoning is characterized by perfect certainty. [Essay IV iv 4-8]

What Locke’s definition clearly demands is that all knowledge is relational in structure, or propositional in form; it invariably involves “the joining or separating of Signs, as the Things signified by them, do agree or disagree with one another.” [Essay IV v 2] But since both ideas and words are properly understood as signs, Locke believed it vital in principle, though often difficult in practice, to distinguish between truth in thought and truth in language. Ultimately he distinguished between mental propositions in which ideas are perceived to agree and verbal propositions that affirm the agreement of words. In both cases, the criterion of truth is that the relation of the signs conforms to a more fundamental agreement that holds among the things they signify. [Essay IV v 3-5] Naturally the two kinds of proposition are connected with each other. Certainty about the truth of a verbal proposition requires that it accurately express the agreement of the ideas signified by its terms; certainty about the knowledge itself further requires that we actually perceive that agreement among ideas. [Essay IV vi 3]

Degrees and Types of Knowledge

Locke distinguished four types of agreement or disagreement that may be perceived in human knowledge: Knowledge of identity and diversity rests solely upon our recognition of the distinctness of each idea from every other; knowledge of relation employs positive, non-identical connections among ideas; knowledge of co-existence perceives the coincident appearance of a collection of qualities; and knowledge of real existence presumes some connection between an idea and the real thing it represents. [Essay IV i 1] He further supposed that these types of knowledge can occur in any of three degrees:

Intuitive knowledge is the irresistable and indubitable perception of the agreement of any two ideas without the mediation of any other. This is the clearest and most perfectly certain of all degrees of human knowledge. It accounts for our assent to self-evident truths and serves as the foundation up-on which all other genuine knowledge must be established. [Essay IV ii 1] Intuition is most common in our knowledge of identity and relation among clear ideas, but (following Descartes) Locke also supposed that each thinking being has an intuitive knowledge of its own existence. [Essay IV ix 3]

Even when the agreement of ideas is not intuitively obvious, it may be possible to discover a series of intermediate ideas by means reason establishes a connection between them. The resulting demonstrative knowledge of the agreement of the original ideas shares in the certainty of the intuitive steps by means of which it has been proven, yet there is some loss of assurance resulting from the length of the chain itself. [Essay IV ii 2-7] The success of the entire process depends upon our having clear ideas at each step of the process of demonstration and upon our ability to perceive the agreements between them, and both of these conditions are specific to the nature of human intellectual abilities. [Essay IV iii 4, 26-28]

The most common area of demonstrative human knowledge is mathematics, where our possession of distinct ideas of particular quantities yields the requisite clarity, disciplined reasoning helps to uncover the intermediate links that establish knowledge of identity and relation, and a perspicuous system of symbolic representation helps us to preserve the results we have obtained. [Essay IV ii 9-10] But Locke supposed that we may be capable of demonstrative knowledge of moral relations as well, provided that we take care in the formation of abstract ideas of the mixed modes of human action. Our only demonstrative knowledge of real existence, he supposed, is that we can have with respect to God. [Essay IV x]

Although only intuition and demonstration offer certain knowledge of general truths, Locke supposed that sensitive knowledge provides some evidence of the existence of particular objects outside ourselves. Although it is not always true that there must exist an external object corresponding to each of our ideas of sensation, Locke argued that veracious cases are different enough from illusory cases to warrant an inference to the real existence of their objects, especially when the accompanying perception of pleasure or pain serves as a reliable guide to the practical conduct of human life. [Essay IV ii 14] Locke had serious reservations about the reliability of our sensitive knowledge of the natural world, and we’ll return later to the chapter of the Essay he devoted entirely to an analysis of its difficulties. [Essay IV xi]