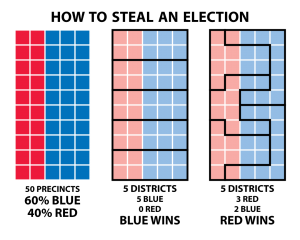 How to steal an election / Steve Nass, Wikimedia Commons

Many Democrats are optimistic about their chances of winning a majority in the U.S. House of Representatives in the 2018 midterm elections. But in a new report, we measured how much harder partisan gerrymandering will make it for Democrats to win seats — and found that even a blue wave election akin to 2006 would be far from enough. Maps drawn after the 2010 tea-party wave to favor Republicans, particularly in big swing states like Michigan, North Carolina, and Ohio, mean Democrats would need to win the national popular vote in 2018 by the biggest margin in a midterm since 1982.

The 2018 elections will test the grip of modern gerrymandering. Voters appear poised to speak loudly. Early indications point to an exceptional wave election. But will that voice translate into electoral results?

While Americans have had wave elections before, one complicating new factor this decade is the pervasiveness of extreme gerrymandering in the drawing of congressional maps. Both parties gerrymander when they can but the practice has been worsened by increasingly sophisticated data and map-drawing techniques. The U.S. Supreme Court considers two partisan gerrymandering cases this year, but rulings will come too late to likely affect the 2018 elections. Instead, Americans in key states will vote again under gerrymandered maps that thus far have proven highly resistant to change.

This comprehensive study poses a stark warning to both courts and the public. What looks to be one of the most important recent midterm elections may turn out, in fact, to show how effectively extreme gerrymandering distorts American democracy and blunts the public’s voice.

Because of maps designed to favor Republicans, Democrats would need to win by a nearly unprecedented nationwide margin in 2018 to gain control of the House of Representatives. To attain a bare majority, Democrats would likely have to win the national popular vote by nearly 11 points. Neither Democrats nor Republicans have won by such an overwhelming margin in decades. Even a strong blue wave would crash against a wall of gerrymandered maps.

This high barrier to a Democratic majority is at odds with early polls showing Democrats with a significant advantage in the generic congressional ballot. As of mid-March, Democrats held an average lead of nearly eight percentage points, 48-40. Based on historical election results, a lead of this magnitude should net Democrats around 30 additional seats — comfortably more than the 24 they need to retake control of the U.S. House of Representatives. Because of gerrymandering, however, that is no longer the case. Even the court-ordered redrawing of Pennsylvania’s congressional map will only improve Democrats’ chances slightly.

The disparities are sobering. This decade, gerrymandering has helped Republicans. In the future, it may help Democrats. Although this report focuses on Democrats, its warnings apply with equal force to Republicans.

To be sure, Democrats might carry some districts they are not projected to win. The March 13, 2018 special election in PA-18 is a recent example. But surprise results under remarkable political circumstances should not obscure the more fundamental lesson of this decade’s maps — gerrymandering matters and it matters a lot. Even if 2018 proves to be an unusual year in a greater than normal number of districts, and produces a surprise surplus of Democratic wins, the effects of gerrymandering will return with a vengeance if 2020 looks more like 2012, 2014, or 2016.

Individual states paint an even clearer picture. As gerrymanders become ever more sophisticated, generic ballot leads no longer effectively predict how many seats a party might pick up. Some state maps are carefully designed to withstand significant electoral swings while others respond more nimbly to shifting political preferences. Thus, even if 2018 sees a fairly consistent — and even sizable — national shift in favor of Democrats that is replicated in the states, the party’s seat yield is likely to vary significantly between gerrymandered and non-gerrymandered states. While seat turnover in non-gerrymandered states might be close to the number predicted by historic data, gerrymandered states will see lower rates of change or, perhaps, even no change at all.

Political scientists call the relationship between the votes a party gets in a state and how many seats it picks up “responsiveness.” In a highly responsive map, a party steadily increases its seats as it increases its share of the vote. That is how most assume a democracy should function. A non-responsive map would be the reverse: one in which a party can increase its vote share by 10 or even 20 percent without gaining a single extra seat. A handful of states have non-responsive maps that are especially stark:

The disparity is even greater when looking at the vote share needed to win a bare majority of the congressional delegations of highly gerrymandered states.

This study is the first to gauge the magnitude of change necessary on a state-by-state basis to flip seats under current congressional maps and the first to visualize the responsiveness of maps, highlighting the stark differences between gerrymandered and non-gerrymandered states.

It also illustrates the need for clear legal boundaries in the age of computerized gerrymandering. Although gerrymandering has long been a feature of American political life, this decade’s maps durably lock in advantages for both parties with unprecedented precision. Even when an election sees massive changes in the votes a party receives, there can be zero change in the number of seats that party can expect to win. An effectively gerrymandered state’s congressional delegation can remain completely static unless confronted with a true tsunami in favor of one party.

This state of affairs turns on its head the Framers’ notion that frequent elections would ensure Congress was a “miniature, an exact portrait” of the people as a whole. While much of the focus in partisan gerrymandering litigation has been on measuring the degree of bias, even more troubling is the lack of responsiveness in this decade’s maps. Regardless of the 2018 midterms’ outcome, this report’s findings serve as a wake-up call: courts must act to rein in extreme partisan gerrymandering or 2021’s redistricting will see even more unresponsive, durable, and undemocratic congressional maps.