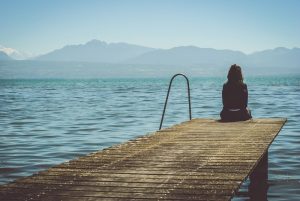 What’s the point of getting up early?

I roll over and glance groggily at the clock … 6:30 a.m. In my semi-conscious state, this seems absurdly early, so I press snooze. Ten minutes later I do the same, persisting in a state of semi-consciousness until 10 a.m., when I eventually roll sleepily out of bed.

My intention had been to get up early to plan and start the day, but my groggy heart and mind were easily convinced to stay in bed because, after all, with unemployment (and all the insecurities that come with it) looming, what’s the point of getting up early?

This has been a typical pattern for the last few days. I’ve found myself having difficulty staying motivated and the weeks have melded into a blur of despair and listlessness. See, I’d found a job that I loved, only to have the work environment be one that can be best described as harmful and at worst, toxic.

When the job ended, the disparity between the position and the environment left me reeling, unsure of how to move forward. Most days, I’ve found myself paralyzed, my mind overwhelmed by both the possibilities and the impossibilities.

A misplaced understanding of my identity

There have been a couple of obvious reasons for my sense of purposelessness: A lack of schedule, a loss of friends (or, at least no more everyday contact with them).

When I really took the time to think about it, though, I realized that my insecurity primarily stemmed from a misplaced understanding of my true identity and my self-worth. I had, without realizing it, attached my value and identity to my ability to perform in my career. When that was gone and I looked in the mirror, all I could see was a failure.

This, of course, isn’t something that’s unique to me. It’s not an isolated experience. In a world that values image and success, the temptation is to gauge our importance and worth by our career, our looks, our financial stability or our ability to travel.

We’re told that there are certain standards that we must aspire to, things we need to do in order to become successful adults. The temptation to subscribe to these standards is quite difficult to avoid, as we’re constantly inundated with them by the media and our social network feeds. We see celebrities and our Internet acquaintances eating, making things, adventuring, cooking, travelling and just generally having a grand old time—all with perfect lighting, colour and background!

In our heads, we know that what we see isn’t reality, yet it looks so enticing that a big part of us believes that it should be our experience, too. But it’s not. It never will be. A part of us knows this, but when we’re inundated with certain messages it’s hard not to believe in them and we’re left desperately wishing we could attain this idealized image, an image we’re sure would make us happy.

One of today’s biggest deceptions

It’s perhaps one of today’s biggest deceptions: the assumption that consumption and entertainment-seeking will produce internal happiness. We think that if we can just do, be and buy the right things, then we’ll experience happiness.

However, acknowledging this as a deception begs the question: If true happiness isn’t found in the external world, where can we find it? This is a thought that’s been on my mind quite frequently as I wrestle with what’s next. And let’s just say, I’ve had a lot of time to think about it!

While mulling this over, I was reminded of the words of Henri Nouwen, a man who chose to spend his life living with individuals with disabilities and has some incredibly poignant things to say about what it means to live a fulfilling life. In particular, he has this to say about our neglect of the inner world and the path towards true happiness:

Instead of running away from our loneliness and trying to forget or deny it, we have to protect it and turn it into a fruitful solitude. To live a spiritual life, we must first find the courage to enter into the desert of our loneliness and to change it by gentle and persistent efforts into a garden of solitude. This requires not only courage but also a strong faith. As hard as it is to believe that the dry desolate desert can yield endless varieties of flowers, it is equally hard to imagine that our loneliness is hiding unknown beauty. The movement from loneliness to solitude, however, is the beginning of any spiritual life because it is the movement from the restless senses to the restful spirit, from the outward-reaching cravings to the inward-reaching search, from the fearful clinging to the fearless play.- Henri Nouwen, Reaching Out: The Three Movements of the Spiritual Life

Nouwen offers an alternative to our constant striving, but his proposed way of being requires that we cultivate the fearlessness to sit quietly with ourselves, listening to our own hearts and minds in order to discover all the beauty and ugliness of the inner self.

Instead of directing our energy outward, we must first direct it inward. Until we do this, we’ll constantly be searching for something in the external world that’ll give us inner peace, which is in itself an oxymoron.

Going inward is a scary but necessary thing if we truly want to be happy. It’s something that I’ve often avoided because I’m afraid of what I might find on this inner journey. Most of us are. But I’ve come to the point in my life where I know that the alternative—constant striving for external happiness through image, experiences and possessions—just doesn’t work and is plain exhausting.