The environmental group Deep Green Resistance recently filed a first-of-its-kind legal suit against the state of Colorado asking for personhood rights for the Colorado River.

If successful, it would mean lawsuits can brought on behalf of the river for any harm done to it, as if it were a person.

In the past, several environmental groups in India, Bolivia, Ecuador, Colombia and New Zealand have successfully sought protection for rivers and landscapes based on this argument. As a Native American scholar of environment and religion, I seek to understand the relationship between people and the natural world.

Native Americans view nature through their belief systems. A river or water does not only sustain life – it is sacred.

Why is water sacred to Native Americans?

In the past year, the Lakota phrase “Mní wičhóni,” or “Water is life,” became a new national protest anthem.

It was chanted by 5,000 marchers at the Native Nations March in Washington, D.C. this spring, and during protests last year as the anthem of the struggle to stop the building of the Dakota Access Pipeline under the Missouri River in North Dakota.

There was a reason: For long years, the Lakota, the Blackfeet and the other Native American tribes understood how to live with nature. And it was based on the knowledge of how to live within the restrictions of the limited water supply of the “Great American desert” of North America. 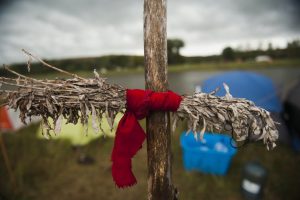 A sage tie, which has spiritual significance for Native American Plains tribes, hangs at the Seven Council camp, on the banks of the Cannon Ball River. Andrew Cullen/Reuters

Native Americans learned both through observation and experiment, arguably a process quite similar to what we might call science today. They also learned from their religious ideas, passed on from generation to generation in the form of stories.

The water world, in particular, was held in special regard. The Blackfeet believed that in addition to the divine beings, about which they learned from their stories, there were divine animals. The divine beaver, who could talk to humans, taught the Blackfeet their most important religious ceremony. The Blackfeet needed this ceremony to reaffirm their relationships with the three separate realms of reality.

The Soyiitapi, divine water beings, also instructed the Blackfeet to protect their home, the water world. The Blackfeet could not kill or eat anything living in water; they also could not disturb or pollute water.

The Blackfeet viewed water as a distinct place – a sacred place. It was the home of divine beings and divine animals who taught the Blackfeet religious rituals and moral restrictions on human behavior. It can, in fact, be compared to Mount Sinai of the Old Testament, which was viewed as “holy ground” and where God gave Moses the Ten Commandments.

Native American tribes on the Great Plains knew something else about the relationship between themselves, the beaver and water. They learned through observation that beavers helped create an ecological oasis within a dry and arid landscape.

As Canadian anthropologist R. Grace Morgan hypothesized in her dissertation “Beaver Ecology/Beaver Mythology,” the Blackfeet sanctified the beaver because they understood the natural science and ecology of beaver behavior.

Morgan believed that the Blackfeet did not harm the beaver because beavers built dams on creeks and rivers. Such dams could produce enough of a diversion to create a pond of fresh clean water that allowed an oasis of plant life to grow and wildlife to flourish.

Beavers were part of what ecologists call a trophic cascade, or a reciprocal relationship. Beaver ponds were a win-win for all concerned in “the Great American desert” that modern ecologists and conservationists are beginning to study only now.

For the Blackfeet, Lakota and other tribes of the Great Plains, water was “life.” They understood what it meant to live in a dry arid place, which they expressed through their religion and within their ecological knowledge.

Indigenous people from around the world share these beliefs about the sacredness of water. 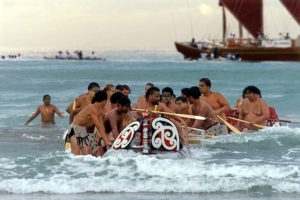 Maori warriors bring in their canoe with the dawn on Gisborne beach to participate in a Maori ceremony to welcome the sun on Jan. 1. Sue Ogrocki/Reuters

The government of New Zealand recently recognized the ancestral connection of the Maori people to their water. This past spring, the government passed the “Te Awa Tupua Whanganui River Claims Settlement Bill,” which provides “personhood” status to the Whanganui River, one of the largest rivers on the North Island of New Zealand. This river has come to be recognized as having “all the rights, powers, duties, and liabilities of a legal person” – something the Maori believed all along.

The United States does not have such laws. This new lawsuit hopes to change that and give the Colorado River “personhood” status. Indigenous people would add, a river is more than a “person” – it is also a sacred place.