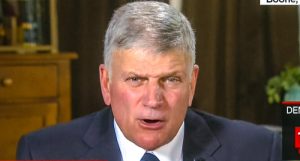 Franklin Graham, son to evangelist Billy Graham and heir to his empire, posted on Facebook yesterday about transgender rights and exhorted his followers to stand firm in their defense of bathrooms.

Of course, he’s exalting them to “Godliness” and saying that they must contest as a unified group the evils of allowing human beings to be who they are, the way his “God” created them.

What would you take a bullet for? What are the principles and beliefs that you would not compromise under any circumstances? Even if it meant putting your life on the line?

King Nebuchadnezzar who reigned over Babylon issued a decree that everyone worship the golden image he had made. Three men who knew the one true and living God, refused to worship the king’s idol—their names were Shadrach, Meshach, and Abednego. The king told them, “But if you do not worship, you shall be cast immediately into the midst of a burning fiery furnace.” Here is their bold reply:

“O Nebuchadnezzar, we have no need to answer you in this matter. If that is the case, our God whom we serve is able to deliver us from the burning fiery furnace, and He will deliver us from your hand, O king. But if not, let it be known to you, O king, that we do not serve your gods, nor will we worship the gold image which you have set up” (Daniel 3:16-18).

Shadrach, Meshach, and Abednego stood firm in obedience and faithfulness. They stood up for God’s truth. They stood up for their faith, and they didn’t waiver, even when it meant putting their very lives at risk. I want to call on every Christian and every pastor to stand firm like these patriarchs of old and not bow to the secular, increasingly godless culture in which we live—even when (not if) we’re criticized, mocked, and labeled intolerant. The God of the Old Testament that delivered Shadrach, Meshach, and Abednego from their fiery execution is the same God today—and He is still more than able to save. Will you stand against ungodliness? What are you willing to take a bullet for?

He really pulled out all the stops here, going back to the mythology of Shadrach, Meshach, and Abednego being saved from the fire into which they were tossed by King Nebuchadnezzar.

Glenn Beck had pastors saying they were willing to self-immolate if necessary following the Supreme Court ruling on same-sex marriage.  The Godly were saying they would fight to the death against President Obama’s legal directive to schools recently.  Now Frankie calls for fighting to martyrdom if necessary.

These threats aren’t new – they’ve been made for some time when they disagree with policies.  Yet Christian bodies are piling up in the streets and I haven’t seen a pastor torch himself yet.

It’s called fearmongering, and they’re very good at it.  Of course they are – they follow a religion that has thrived on it for growth and now sees itself being relegated to mythological status as more than ever before walk away.

It’s their own fault, really.  If they’d just worshiped their God and not tried throwing him at everyone else in law, we’d be in a different place.  Forcible conversion, and lacking that, obedience, never ends well.