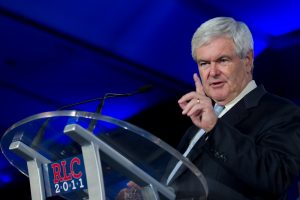 I’m ready for a Congress that doesn’t prioritize hate speech and obstructionism over good governance.

With the election over and a new Congress ready to be sworn in this January, I’m ready for a new, less toxic style of politics.

Journalist McKay Coppins traces the toxic politics of today back to Newt Gingrich in the 1990s. Gingrich, he said, pioneered “strategic obstructionism.”

Here’s what that means: Let’s say a bill was very popular with voters. Once upon a time, both parties might have compromised and passed the bill through Congress. Gingrich put a stop to that.

They’d tell the voters that Democrats won’t fix your problems so you need to elect Republicans. Never mind that Republicans caused the obstruction in the first place.

This worked. It still works.

That was Republican Senate leader Mitch McConnell’s strategy throughout the Obama presidency: Don’t pass anything, then blame the lack of action on Obama.

Here’s the thing: While this strategy is effective at winning elections, it’s not an effective way of governing. It serves none of us when our leaders can’t get anything done.

Since the 1990s, we’ve lived through political rhetoric that stokes fear and anger. Fear and anger draw you in like a magnet. Fear and anger motivate people to watch more TV, click more links, and donate and volunteer more to campaigns. That doesn’t make them healthy or constructive.

There are a few other theories why Congress doesn’t work anymore.

One worth noting is the elimination of “earmarks.” In the past, Congress could persuade members to compromise on a bill by including earmarks: provisions in the bill allocating money to one or another member’s district. In exchange for voting for a bill he or she didn’t completely love, the representative would get funding to repair a bridge in his or her district or something like that.

In 2010, Congressional Republicans initiated a ban on earmarks. In 2011, Obama promised to veto any bill containing earmarks. They were decried as a form of corruption. However, they served to grease the wheels of democracy.

As a citizen, the poisonous rhetoric is painful to listen to. Watching the news hurts. Some politicians are openly spewing hate speech. Hypocrisy is rampant and nobody cares.

I’m all for politicians taking morally principled stands on behalf of their constituents. They’re supposed to do that.

What they aren’t supposed to do is focus on what will get them elected or keep them in office at the expense of what they must do to govern.

If both sides could agree on a bill that would benefit the American people, especially one most Americans support, they shouldn’t obstruct it just to score political points.

We’ll have a new Congress taking office in a few months, and then the next presidential race will begin to heat up. As voters, we should no longer reward hate speech and obstructionism that come at the expense of good governance.

Originally published by OtherWords under the terms of a Creative Commons Attribution-No Derivative 3.0 license.