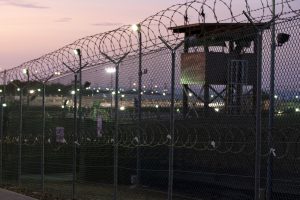 What was the truth and what was simply a government or media mirage? Who could tell?

At the beginning of January, I co-led a workshop with AFSC intern Tory Smith at the Philadelphia Young Adult Friends Gathering at Swarthmore College, with the title “The light after 9/11: Quaker faith and the War on Terror.”

After we gathered and settled into worship, Tory and I encouraged participants to share their experience of “9/11″—the story of where they were when the planes struck the twin towers.

It was a moment when everything changed in America—our public policy, our national conversation, our identity as a nation.

But for many of us, it was difficult to gauge its gravity or its significance.

But we didn’t really know what was going on— its meaning was to be revealed to us only slowly, over time, through wars and an economic collapse.

We created a timeline together of everything we could remember that occurred between 9/11 and now, with any connection to the War on Terror.  It was fascinating to piece together, as a group, the series of events that now I remember as a kind of blur, a haze, really, of foiled terrorist plots, missing Weapons of Mass Destruction, an increased reporting on the effects of Post-Traumatic Stress Disorder, and a few glimmers of hope regularly dashed by a government system that is mostly unresponsive to the desires of its people.

What was the truth and what was simply a government or media mirage?  Who could tell?

Many of us were surrounded by conversations about the legitimacy of the war, of George Bush’s competency as a leader, and the often ineffective results of our unending efforts to stay safe.  We silently complied with each increased measure of surveillance and security.  We saw our rights and the rights of others slowly being eroded, and the end of terror nowhere in sight. 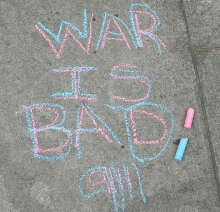 Meanwhile, the explosion of the internet gave us a new power of voice, an ability to connect with others around the world and create change even if we didn’t know those change’s immediate effects.  We couldn’t see what was going on in Iraq or Afghanistan, or what our policy makers were doing with their money or their power. But we could see one another—sometimes for the first time and often on equal terms.

Amid all of this chaos, an adolescent who grew up during the War on Terror never developed a clear sense of truth or reality—we were taught to question everything, not to trust the government or the governments of other nations.  We had only our connections to teach us their truth and ask us to understand our own.

So what does this mean for young Quakers, then, right now and for the long haul?  If the War on Terror is our “Vietnam,” what are young people to do? Many of us are convinced that marches and rallies are not the answer, although, perhaps, part of it.  The answer instead lies in the lives we create for ourselves and others, the professions we choose, connections we make, and the voices we raise.  I see it evident in local community gardens and cooperatives, in small organizations connecting and pooling their resources outside of our government structures to create change locally and spark conversation nationally.

The War on Terror is a haze of confusion and fear.  But it has galvanized a generation to reclaim our humanity by insisting that our fundamental rights be respected and restored.

We may not be taking to the streets—but we are having conversations using the sometimes overwhelming power of new technology.  We are determined to bring the truth to the light.  We are infusing our lives with the ideals of equal treatment and justice, and in so doing creating a world in which there is no “them”—there is only us. There is only me and you.  So let’s talk.  Let’s experiment with a new kind of social order, one in which we’re all at the table.