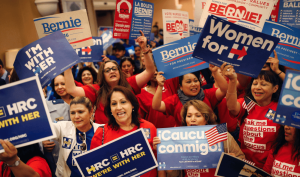 I am sick and tired of some Hillary Clinton supporters throwing out “sexism” – constantly.

Just because a male says something to or about a female that comes off as rude or disrespectful does not instantly make it sexist.

Sure, there has been sexism thrown Clinton’s way. When you have Michele Bachmann, of all people, sort of showing sympathy toward Hillary Clinton over the double-standard women endure in politics, that pretty much proves that sexism is alive and well. And there is undoubtedly a different standard for women – all women – in politics, and society for that matter.

But to constantly paint Sanders as a sexist is ridiculous. To even try to claim he’s sexist is pretty absurd in and of itself.

I’ve watched plenty of Bernie Sanders interviews and speeches over the years; he’s a fairly blunt, very animated idealist who gets very into what he’s passionate about when speaking. During instances where he seems like he’s being sexist toward Clinton, that’s just Bernie being Bernie. I have no doubt that if Clinton were a man, or he wins the nomination and debates whoever becomes the Republican candidate, he’s going to act exactly the same – loud, passionate, hands flying around, arms often flailing while he speaks like he’s conducting an orchestra on LSD.

While the “Bernie Bro” phenomenon is something that does exist, it is something that’s been overblown by quite a few Clinton supporters. Not only that, but I think it’s important to stress that random comments on the Internet should often be taken with a grain of salt. I’m fairly certain that a lot of these so-called “Sanders supporters” who’ve said a lot of these vile things aren’t actual Sanders supporters. I have noticed on my Twitter account that quite a few “Sanders trolls” are people who seem to have created alternate accounts. Many times it’s people with little to no followers, who have generic profile pictures like the default “Twitter egg.”

Even as someone who supports Hillary Clinton, I’ve been blocked by quite a few of them for calling out these fairly ridiculous claims of sexism about damn near everything. I’ve even been called a “sexist” myself, because I dared to push back when these “always looking for sexism” people were being ludicrous. I feel the same way about this as I do racism; when you claim sexism in instances where it doesn’t exist just to use sexism as an attack, you do an injustice to actual sexism.

Again, if there’s legitimate sexism, by all means, call it out. But it seems that there’s a good chunk of Hillary supporters who seem to think everything Bernie Sanders or his supporters say or do is legitimately sexist.

And, please, stop bashing his age. I know – I’ve brought it up in the past, but I’m done mentioning it and haven’t in quite a while. Nearly everyone knows he’s 74 – we get it. Suggesting he’s not “mentally fit,” or even could have “Alzheimer’s” (yes, this seems to be a growing attack) is pathetic and should be beneath all supposed “liberals.” Long-time Democrats who are still fighting tooth and nail in Congress to save this country from Republicans like Sen. Harry Reid, Rep. Nancy Pelosi and Rep. John Lewis are all older than Sanders and I don’t see anyone bashing their “mental ability” to do their jobs.

If people want to be hesitant about supporting him because of his age, that’s their choice. Again, almost everyone is aware that he’s 74-years-old. There’s no reason to use that to levy petty, personal attacks against him.

Now I’m sure I’ll get bashed by some supporters on both sides for writing this, and that’s fine. And I’m certain Sanders people will do what they always do, claim that I wrote this to “bash Sanders” under the guise of “trying to bash both sides.” It’s a debunked conspiracy I end up seeing often when I write something like this.

As for the rest, as I’ve said for months, once the nominee is chosen, we must all come together and #VoteBlueNoMatterWho – because far too much is on the line this election to allow Republicans to win back the White House.

Editor’s Note: The author is a Clinton supporter. This article, which includes his issues with supporters of Sanders, was edited to focus on claims of sexism against Sanders. Entire article available at The Moderate Voice