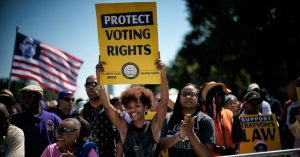 A protester from North Carolina urges the defense of voting rights at a march in Washington in 2013. (Photo: Scout Tufankjian / Polaris)

All is not well, but that does not mean that all is lost. 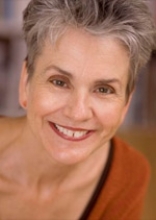 American democracy faces huge problems, most of us agree. Still, as recently as last summer,  Pew Research found that 85 percent of us embraced the idea that America “stands above all other countries” or that it’s “one of the greatest, along with some others.” Understandably, it’s tough for many to give up the notion that America is exceptional—exceptionally good.

But as citizens it’s our duty to come clean—to know where we do stand, not just relative to our ideals but to other societies as well. On that firmer ground, we can better imagine what’s possible and thus become even more motivated to build the democracy we desire and deserve.

So, grab your pickaxe and let’s get to the depths of our democracy’s deficits and their real-life consequences.

Here, the Electoral Integrity Project, based at Harvard University and the University of Sidney, offers a great digging tool. Periodically—building on observations of about 3,250 experts—it ranks nations on eleven essentials of electoral democracy, from sound voting procedures to keeping private wealth from dominating politics to the fair drawing of district lines.

Recently, the Project released its latest findings covering 285 elections around the world from 2012 through 2017. And, where did our 2016 presidential election? Next to Colombia, a sad 130th, meaning that almost half the world’s elections are judged superior to ours. Lest we imagine 2016 to be an outlier, our 2012 election ranked only somewhat better, at 98th. Indeed, our score in 2016 put us in the company of presidential elections in the Ukraine, Liberia, El Salvador, and Colombia.

On one measure of sound elections we fail utterly: the drawing of fair electoral district boundaries—what’s called “gerrymandering” when its rigged. In the entire world, only Malaysia and Singapore are rated worse than we are.

Freedom of the press also lies at democracy’s heart, and here, too, we are sliding. In the 2018 World Press Freedom Index by Reporters without Borders, the US sank a few notches to 45th place, right below Romania. The dozens rated above us include Burkina Faso, Chile, South Africa, and Ghana.

Closely linked to impaired democracy is deepening economic inequality, which scholars find associated with a vast range of social troubles from crime to mental illness.

Aware that inequality here has been worsening, observers often note that ours is now more extreme than in other “rich countries.” True, but that’s not the half of it.  Of 158 countries ranked, almost 100 do better than we do, according to IndexMundi, drawing on World Bank data. Inequality here is on par with Turkey and Uganda. Among the thirty-seven OECD (mostly European) countries, we come in fourth from the most extreme, sitting between Lithuania and Turkey.

These intertwined crises—our democracy deficits and extreme inequality—come with heartbreaking consequences: The death rate of U.S. babies is higher than in twenty-five developed countries and twice that in some; and half of our newborns are so poor they must depend on public aid for sustenance. Another measure of distress? More than half of us are so financially strapped that we’d have to take on debt to cover even a $500 emergency.

So, where’s the hope hiding in all this bad news?

Well, what if our democracy were rated respectably among nations, while simultaneously we suffer such unfairness, distress, and tragic losses. What a condemnation of democracy that would be! The fact, however, that other nations are doing better—some of them vastly better in both democratic procedures and social outcomes—underscores democracy’s value. That’s great news.

We can take the news that others are ahead of us, and let it fire up our curiosity to dig for lessons from abroad as well as to propel the spread of democracy reforms already underway here in states and municipalities.

Maine is an early example of efforts to release elections from the overweening influence of private wealth. There, public financing of campaigns, beginning in 2000, has made possible a legislature with the country’s highest share of working class members. On the other side of the country, in 2017 Seattle offered voters in certain city elections publicly funded “democracy vouchers” that they could contribute to candidates of their choosing. With the vouchers, significantly more diverse, low-income, and young voters participated as donors.  Now some are angling to take Seattle’s successful approach to national elections.

Earlier this year, Washington, D.C.’s city council unanimously passed public financing for its elections. Moreover, since Oregon took the lead in 2015 in expanding voter participation via “automatic voter registration,” eleven more states and the District of Columbia have jumped on board; and in 2018, twenty additional states have proposed the measure.

Even on gerrymandering, where we rank near the bottom worldwide, several states have created independent districting commissions to address the crisis. California stands out, as its commission is the result of a fiercely nonpartisan and inclusive process; and in drawing new district lines the commission listened to citizens in dozens of feedback sessions across the state.

These and dozens more deep-reform efforts are building a multi-pronged Democracy Movement across the country. Progress for democracy begins as we find the courage to face painful truths, draw on lessons from here and abroad and join the mounting energy to build on our own under-celebrated successes.