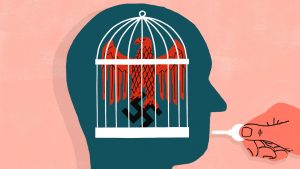 In the aftermath of World War II, psychoanalysts like Roger Money-Kyrle looked for the psychological roots of the authoritarianism that had destroyed Europe – and found it closer to home than was comfortable.

In 1945, as Germany lay in ruins at the end of World War II, psychologists and psychoanalysts on both sides of the Atlantic were concerned with ‘denazification’. They wanted to address fears that fascism would reappear in Europe and provide practical suggestions to shore up liberal democracy in the aftermath of Nazi defeat. As well as rebuilding Germany as a humane and unthreatening nation, they also tried to account for the psychological conditions that had allowed Hitler to rise to power in the first place.

The years 1914 to 1945 had been characterised by war, economic crisis and toxic new ideologies. During the interwar decades, many anxious liberals, including the English psychoanalyst Roger Money-Kyrle, looked at Italy and Germany, where extremist political movements were using new media technologies to bolster their material hold and psychological influence. Radio, film and newspapers carried messages to millions, whipping up what Money-Kyrle called ‘mass suggestion’. He believed that people had a general tendency to obey authority but could also experience paranoia and ‘schizoid’ functioning: seeing the world in black and white and finding scapegoats to blame for society’s ills. The new mass media only amplified these mechanisms. 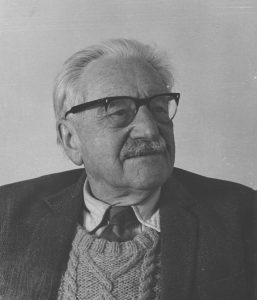 In the 1940s, as war once again engulfed the European continent, Money-Kyrle joined forces with other psychoanalysts, psychiatrists and psychologists in trying to make sense of the allure of propaganda and its exploitation in ‘mass psychology’. How, he asked, could countless numbers of people “be almost hypnotized into accepting anything that is asserted with sufficient authority and force”? 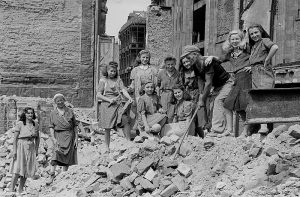 For Money-Kyrle and his clinical colleagues, understanding the threat to political freedom, both at home and abroad, involved thinking about how our own external and internal worlds interact. He believed that politics was profoundly affected by the unconscious, and by unconscious fantasy. People under pressure might seek demonisation and denial from their leaders; their leaders in turn might use propaganda to exploit their people’s most infantile and archaic tendencies. In many ways, much of what Money-Kyrle and his fellow clinicians, including Henry Dicks, saw in the poisonous politics of their time anticipated today’s daily debates about the state of democracy by the liberal political commentariat on both sides of the Atlantic.

The Allure of Totalitarianism

Money-Kyrle came from an aristocratic family. He was educated at Cambridge and met members of the Bloomsbury group; Virginia Woolf mentions him in her diaries. Increasingly interested in Freud, he underwent analysis with ‘the Professor’ in Vienna, and became an analysand of the Austrian psychoanalyst Melanie Klein in London. Klein’s writings on the ‘paranoid-schizoid’ and ‘depressive’ positions inspired much of his work on politics and democracy. He hoped that psychoanalytic thought could be useful not only in thinking about the crisis of democracy, and understanding the allure of totalitarianism, but also in changing human relations. 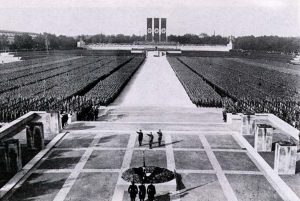 Money-Kyrle had attended a Nazi rally in 1934. He understood that the Nazis were particularly adept at psychological coercion and seduction, using powerful propaganda to manipulate the minds of the German public from states of depression, through paranoia, to full-blown collective mania. He saw how forceful emotions seemed to become infectious across crowds. Hitler and his followers often built up a sense of group cohesion by naming and shaming an imaginary enemy as the source of all ills: communists, Jews, homosexuals, other nations, all ‘conspiring’ against Germany.

At the end of the war, Money-Kyrle joined the effort to defang the Nazi threat in the newly emancipated Germany just as the iron curtain was descending. He admired fellow Kleinian analyst Wilfred Bion’s experiments with leaderless therapeutic groups to explore how the unconscious group dynamics that aided the rise of fascism could be collectively worked through. Money-Kyrle was sceptical about the extent to which such therapy could work at the state level: a ‘cure’ for fascism remained improbable. Nevertheless, he continued to argue that political science needed to pay attention to psychic dynamics within nations in order to understand how totalitarianism had succeeded, and how future totalitarianism might be prevented.

The Struggle for Hearts and Minds

By 1948, the Soviet Union had claimed the eastern half of Germany for the Warsaw Pact, and British and American psychologists turned their attention from Nazism to Stalinism. Cold War conflict was more than global politics: it was a struggle for ‘hearts and minds’. It reduced disparate conflicts to a single mega-struggle, characterised by many Western commentators and politicians as a zero-sum game between liberty and tyranny, ‘open-minded freedom’ against ‘the socialist way of life’, and an endless rhetorical war of words about ‘us’ and ‘them’.

Could the psychology of Nazism hold the key to understanding Stalinism? And could the two ideologies be illuminated by drawing on the idea of ‘totalitarianism’?’ In Britain, Money-Kyrle’s erstwhile colleague Dicks interviewed Nazi mass murderers for his 1972 book, ‘Licensed Mass Murder’. Both men had been directly involved in Allied efforts at ‘denazification’ in Germany. Dicks’ later work was part of a larger programme, funded by David Astor and directed by Norman Cohn, that brought clinicians, anthropologists, historians and social scientists together to consider what fruitful links could be made between past horrors and present-day politics and mass movements. Cohn himself looked as far as 16th-century witch-hunts in his 1975 book ‘Europe’s Inner Demons’.

Meanwhile, in the United States, social psychologists were searching for the dark side of human interaction in everyday life, creating ingenious new surveys and experiments to explore our unspoken attitudes and hidden beliefs. Psychologists like Stanley Milgram and Philip Zimbardo were interested in attitudes to authority and obedience, and how people operate in relation to ‘superiors’ and to ‘peers’ in a group. 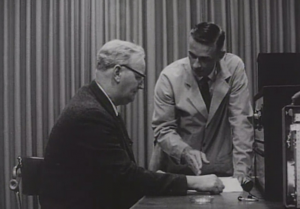 Stanley Milgram’s obedience experiment: an experimenter gives a subject instructions to deliver an electric shock to another human being. / Wikimedia Commons 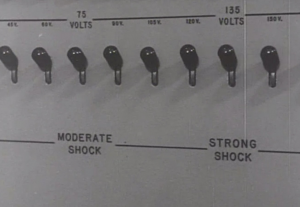 Subjects continued to obey these commands even when the voltage was high enough to cause death. / Wikimedia Commons 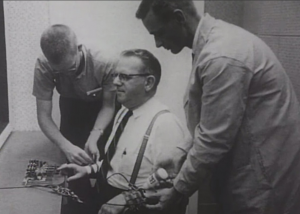 In reality, the electric shocks were fake – nobody was hurt during the experiment. But it demonstrated how willing people were to obey instructions from authority figures. / Wikimedia Commons 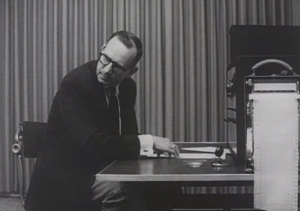 Milgram’s experiment has since been subject to critique for its rigour, but at the time it was considered to shed light on the universal psychological tendency to submit to authority, even when this conflicted with personal conscience. / Wikimedia Commons

Milgram’s obedience experiments at Yale in the late 1950s and early 1960s showed that an authority figure could easily convince many test participants to give another human being painful electric shocks. Philip Zimbardo’s Stanford Prison Experiment in 1971 probed the capacity for ordinary individuals to behave sadistically towards their fellow human beings when licensed to do so. Zimbardo claimed that this happened so readily because people are drawn to acting out roles, such as that of a brutal prison guard, rather than due to any innate psychological predisposition.

Money-Kyrle would have concurred that the ‘psychopathological’ attitude that can be exploited in politics was not a German or Russian peculiarity: even citizens in liberal polities are not free of ‘totalitarian’  propensities. While the obedience and prison experiments remained controversial, their work was taken by many as confirmation of a deeper truth: ordinary people have authoritarian and fascistic propensities.

Zimbardo and Milgram drew on a different model of the mind from the one that Money-Kyrle was committed to. But they had something in common: the insistence that we are never far from ‘totalitarianism’. If ordinary men and women could be swayed to torture others, citizens of any country could also be drawn into colluding with barbarous regimes if the political climate was right.

Today, we live in an age of anxiety about ‘post-truth’ politics. ‘Fake news’, targeted messaging and seductive persuasion are rife. Digital technologies have created extraordinary new possibilities for the analysis of voter behaviour and also voter manipulation. But many of our contemporary concerns about the new dark arts of political persuasion and unconscious psychic life have a longer history. In the mid-20th century, psychologists’ curiosity and dismay about our susceptibility to manipulation and control crystallised. Their writings, though flawed and dated, still offer us food for thought in a new age of economic convulsion, population movement and toxic populist fervour. In the 1940s, Money-Kyrle was worried about the power of radio and other mass media to reveal and provoke our worst selves. In the 21st century, he would have been looking online.