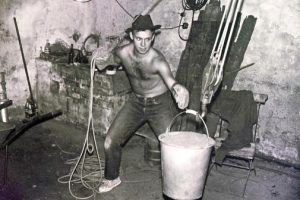 Greg Mitchell’s book The Tunnels: Escapes Under the Berlin Wall and the Historic Films the JFK White House Tried to Kill(Crown) was published on October 18.  His previous books  include Tricky Dick and the Pink Lady, The Campaign of the Century (winner of the Goldsmith Book Prize) and, with Robert Jay Lifton, Hiroshima in America.

On August 13, 1961, Soviet-backed East Germany began erecting what would soon become known as the Berlin Wall, a seemingly impregnable barrier bolstering the border of the already divided city.  Within days, the first East Berliners tried to overcome it:  jumping out of apartment windows to the West, swimming across rivers and canals, navigating the sewage system, flashing fake passports at checkpoints, smashing through concrete in trucks.   Many were captured in the process, some shot and killed.

Soon, heightened security stopped most of these attempts and so an even more desperate method was tried: digging tunnels under the Wall.  And unlike nearly every escape tunnel in history, these went in the direction from freedom to “imprisonment,” not the reverse.

From 1962 to 1964, several dozen tunnels were excavated, almost all by young men, mainly students, seeking to bring friends, lovers, family members and even strangers to the West.   Some were partly supported by wooden posts and boards, others were just narrow caverns.  Most were not successful for one reason or another: flooding, ceiling collapse, or discovery by East German police.   But more than a dozen did succeed in bringing refugees to the West, sometimes just a handful, on other occasions twenty or more in a single day.  (I explore the earliest tunnels–and attempts by President John F. Kennedy and Secretary of State Dean Rusk to suppress CBS and NBC coverage of them–in my new book, The Tunnels.)

This virtually ended, however, in 1964 – fifty-two years ago this month – even though the Wall still stood.   At least two tunnelers had been shot and killed by East German guards or Stasi, but the death that would end the era of the tunnel was not one of them.

For months that year, the young West Germans, led by tunnel organizer, Wolfgang Fuchs, had been steadily excavating the longest passage to date, more than 450 feet, from an old bakery at Bernauer Strasse in the Wedding section of West Berlin, under the Wall and “death strip” (with its guard towers, snipers and electronic surveillance), toward the basement of a building a block or two beyond.

Finally, in early October, they broke through, not in a cellar but in a shack in back of the building formerly used as an outhouse.   Well, they could make that work—at least it provided cover.    Over the next two days, fifty-seven refugees arrived at the site, slipped into the underground, and made their way to the West.  Among those assisting them was Reinhold Furrer, later famous as the first German astronaut on the U.S. space shuttle.  Another, Joachim Neumann, would forge a career supervising tunnel digs around the world, including the one under the English Channel.

Then, on October 5, 1962:  discovery.   Two men not on the escape list appeared at the door, raising suspicions. They left, but soon East German border guards appeared.  A shootout ensued.   A guard fell, mortally wounded.  The escape helpers managed to crawl through their tunnel back to the West.

What had been the most successful tunnel escape ever quickly turned into a public relations disaster for the diggers.  The East German communists elevated the guard, Egon Schultz, to hero/martyr status, with numerous streets, schools and parks gaining his name.  They accused the escape helpers of murder and demanded an arrest.   One of the diggers, Christian Zobel, admitted he fired a shot, but his colleagues claimed that Schultz might have been killed by friendly fire.   The East Germans heatedly denied this, but refused to release autopsy results.

What was certain: Schultz was dead.  And this cloud over escape operations would not disappear.  The West German government, and its American patrons—right up to the White House—had long been wary of sensational escape efforts, fearing they might provoke another U.S.-Soviet confrontation (the Cuban missile crisis was only a year in the past) or nuclear war, but had sometimes provided monetary support or police protection.  Now they foreswore any further assistance.

Diggers grew discouraged, but discovered other safer and easier ways to bring out refugees (often for a fee) under the backseats, or dashboards, or large automobiles.   The tunnel era was over.  In the decades that followed, fewer escapes of any sort were attempted as border restrictions were eased to allow very limited visits to the West by some East Berliners.   The Wall finally fell in 1989 and Germany was re-united. By then well over one hundred had been killed attempting to flee.

After the Wall came down the truth about the death of Egon Schultz emerged:  he had indeed been killed by one of his fellow guards.