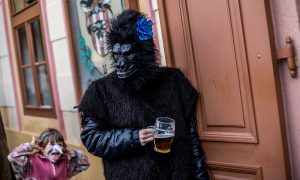 At the Prague carnival. Photo by Matej Divizna/Getty

Drinking and producing alcohol are among the most universal of human behaviours. On the face of it, there is no obvious connection between today’s casual (or excessive) drinking of alcohol, and the natural ecology of monkeys, apes and other primates living in tropical forests. So why do we have such an instinct for drink? Could the most commonly used of all psychoactive substances occur in natural environments, and could our ancestors really have been exposed to alcohol on a regular basis?

The ‘drunken monkey’ hypothesis proposes that alcohol, and primarily the ethanol molecule, is routinely consumed by all animals that eat fruits and nectar. As first worked out by Louis Pasteur in the 19th century, fermentation is a natural process deriving from the metabolic action of yeasts on sugar molecules. The molecules produce alcohol to kill off their bacterial competitors, and the booze accumulates at low concentrations within fruits and nectar. It also wafts into the environment, producing a downwind vapour trail that reliably indicates the presence of fruits and sugars. Any animal that can sense and follow this odour upwind will come to the source of ethanol and, of course, the sugars within the fruit. In tropical forests, ripe fruit occurs patchily, so any ability to find it over long distances is beneficial.

Not only does alcohol provide a useful long-distance sensory cue, it can also act as a feeding stimulant via the well-studied ‘apéritif effect’. Today, we often drink when eating, and overall food intake tends to go up as a consequence. The psychoactive and pleasurable features of alcohol certainly make us feel happier, particularly in social contexts, but they also act to increase overall energy gain. For animals searching in a rainforest for scarce nutritional resources, it’s similarly a good idea to consume ripe fruits as quickly as possible before the competition arrives. But do they ever actually get drunk?

There are lots of funny anecdotes about apparently drunken animals in nature, including moose feeding on fermented apples in Sweden, and cedar waxwings in the American Midwest that are too buzzed to fly. Only rarely, however, have these animal boozers ever been scientifically studied, and direct proof of inebriation is rare. Instead, the guts of fruit-eaters typically fill to satiation well before incapacitating blood-alcohol levels can be attained. Even though some animals can eat up to 10 per cent of their body weight a day in ripe fruit, the typical concentrations of alcohol in fruit pulp are only about 0.5-3 per cent. So they never get drunk! And this is a good thing too, especially for flying fruit-eaters such as toucans and fruit bats, given that predators are always on the lookout for the weak and the vulnerable. And most species in the wild (including fruit flies) have really good enzymes to degrade any ingested alcohol.

But we’re different. Around 10 million years ago, as our ape ancestors progressively became more upright and began to walk about bipedally, an interesting change occurred in their physiological ability to process alcohol. Based on DNA sequence data and modern-day reconstruction of ancestral enzymes, we now know that the ability of these early apes to metabolise alcohol increased about 20-fold due to a single-point mutation in their genes, consistent with greater dietary exposure to this molecule. These animals were walking about the forest floor and within savannahs, and might have simply been obtaining greater access to fallen fruits that had been fermenting longer, and thus that contained more alcohol. Whatever the initial advantages might have been for this particular mutation, we have retained it into modern times. What once helped to find food more efficiently in the wild has become a major part of human culture, with alcohol both loved and abused worldwide.

Today, we clearly have a conflicted relationship with the alcohol molecule. Some health benefits accrue to many individuals who engage in low-level drinking, but mostly just a reduction of cardiovascular risk. For those who like high-level, extreme drinking, alcohol poses substantial dangers to themselves and to others (particularly when behind the wheel of an automobile). Can an evolutionary perspective on our relationship to booze help us understand the apparently insoluble problem of addiction to alcohol? At the very least, recognition of an ancient and persistent dietary exposure to the molecule suggests that today’s drinking behaviour is motivated, in part, by deeply rooted reward pathways within our brain. And these responses we share with creatures as diverse as fruit bats, flies and our nearest living relatives, the chimpanzees.

So the next time you enjoy the fruits of fermentation, think about deep evolutionary time and our ape-like ancestors foraging within tropical rain forests.