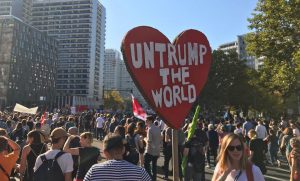 Hundreds of thousands on the streets of #Berlin for solidarity and against the global far-right. | Fabian von der Mark/Twitter

They marched under the slogan “Unteilbar” (Indivisible), in an outpouring against racism, hatred of foreigners and especially refugees and immigrants. 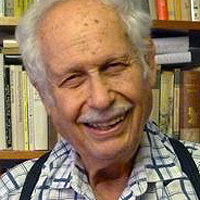 Jein! Last weekend was surely the most complex in ages! Were the results favorable for the good side? The best answer is, once again, that great German word construction, made up of Ja (yes) und Nein (no): Jein, pronounced “yine.”

Last Saturday was amazing! Hundreds of thousands, representing many groups, organizations and prominent individuals marched, under the slogan “Unteilbar” (Indivisible), in an outpouring against racism, hatred of foreigners and especially refugees and immigrants. It was a challenge to the Alternative for Germany (AfD), a party between far-right and fascist which, with 18 percent,  has achieved a frightening second place in the national opinion polls. It was hoped that a rally and march opposing AfD and its openly violent allies and accomplices would attract a respectable count of 40,000 people, maybe 50,000. To everyone’s astonishment, an awesome number showed up, estimated at over 240,000! A truly giant crowd!

After an hour of short speeches, the first parade blocks moved out from East Berlin’s central Alexanderplatz at 1 p.m. Before the last ones could finally move off to follow them the first marchers had already reached the final destination three miles away in West Berlin’s big central park, Tiergarten, where more speeches and lots of music were offered till after 9 p.m. Many, many people, coming from all parts of Germany, are clearly worried at the rapid growth of the AfD, which threatens to head one state government if it wins the election in Saxony next year, where it is five points behind the first place Christian Democrats, who have led the pack in Saxony ever since German unification.

“Unteilbar” targeted especially racism and national chauvinism, but the multitude of signs, banners and speakers from many organizations raised a variety of issues. The LINKE (Left) was there, so were Social Democrats and Greens. Union leaders voiced labor’s demands. One represented cabin staff workers from Ryanair, who may soon be on strike.

Church speakers stressed tolerance, a Muslim leader (whom some had wanted to exclude because of possible ties to Turkey) called for a rejection of anti-Semitism in the Islamic community. A leader of the Jewish community condemned xenophobia of all kinds but slipped in a sharp jab at anyone supporting the boycott movement against Israel’s Netanyahu government.

Many people carried stickers or signs backing #Metoo, and a wide variety of environmental demands were visible. It was a grand, even happy occasion on a very sunny day, with no disruptions or attacks. AfD goons kept well away from this huge crowd!

A small group stressed war and peace and opposed armament exports. A few negative voices were raised on the left because of the total lack, in the printed appeal and most speeches, of any mention of the reasons why so many flee to Europe. Omitted, perhaps to gain wider support, were the causes of conflicts and growing poverty in Africa and the Mideast and the dangers of escalation – of a far worse war which could start in Syria or during on-going NATO military maneuvers along Russian borders not so very far away.

More problematic was the fact that the new movement, “Aufstehen” (Stand Up, or Rise up), had not joined in. Why was that?

Sahra Wagenknecht, herself a leader of the LINKE but also the main initiator and leader of Aufstehen, stated that she “found it correct that so many people demonstrate against racism and a turn to the right,” but then criticized the call to the rally, in which a demand for “open borders for everybody“ was its key position. “Calling for open borders for everyone is a demand which most people feel is unrealistic and irrational, and their feeling is correct… So we are not formally joining in. Some of our people will surely take part.” But she herself would not.

This issue has split the LINKE leadership for much of the past year. Wagenknecht’s position with “Aufstehen” is surely derived from hopes to win over or win back many of those lured by the AfD and its poison – that refugees are getting all the social services which true-blue “bio-Germans” are deprived of. This is hardly true, but it is true that workers from other countries can well be misused to push wages down, and must also be housed at a time when affordable apartments are exceedingly rare. But taking such voices into account can result in moving perilously close to the positions of the fascists while possibly weakening basic leftist internationalist principles. The current decrease in the influx of refugees into Germany, down from six-digit figures three years ago to a present much lower rate of under 100,000 annually, could weaken the far-right propaganda. It should hardly be echoed!

In any case, this dispute, although it does touch on important questions for all the wealthier countries, now seems troublesome and unnecessary to many on the left, and some claim that at the bottom personality questions may be involved. There is still hope that the dramatic birth of Aufstehen on September 4, aimed at attracting left-leaning people from all parties and winning many away from the AfD, may soon begin to go into action and strengthen the progressive movement, not divide it.

Other more rigidly leftist critics complained that the huge rally failed to call for basic changes in the current German government with its conservative CDU and its lame and plummeting Social Democrats. Simply opposing racism and calling for better social conditions do not get at the root of German militarism, imperialism, indeed capitalism. They described its message with the derogatively sarcastic description “Friede, Freude, Eierkuchen” which translates as “Peace, joy, griddle cakes.”

In view of its wide range of supporters, this cannot be fully denied. But the answer, by close to a quarter million people, was the need to fight fascism with as broad a range of support as possible. No history tomes are needed to see parallels with the avalanche of 80-90 years ago – all too similar to that of the AfD and its allies, from its thugs to its highly-placed political leaders in the “Christian” parties – and to recall what that brought to Germany and the world.

Which leads to last Sunday’s election in Germany’s largest, wealthiest state, Bavaria. Was it good, happy news? It too certainly involved drama!

The misnamed Christian Social Union (CSU), the Bavaria-only sister party of Angela Merkel’s equally misnamed Christian Democratic Union (CDU), has ruled there since the Federal Republic was founded, mostly alone, thanks to winning over 50 percent in an almost solid reactionary south, close to though rather worse than Merkel’s general backing. But in the last year or two, fearing losses to the AfD, the two rival bosses of the Bavarian CSU, one ruling in Munich, the other, Horst Seehofer, the Interior Minister, in the all-German government, tried to outdo the AfD in nastiness against refugees, blocking and interning them at the main refugee entrance points along the Austrian border, in cahoots with the far right government in Vienna. Seehofer even snarled publicly at Merkel, an untold breach of official etiquette.

Shortly before the election, they realized their tactic was not working; rabid rightists would vote for the AfD rather than its copycat. But their switch in tone came too late. Last Saturday, on October 14, they got the second worst vote in their history, a measly 37 percent (rounding off the figures). Though still the largest party, they must now shop around for a coalition partner to get 50 percent and enough state legislators to form a government. Their big loss evoked many happy smiles described best with another good German word – Schadenfreude! Hurrah, they got whipped!

But also whipped, even more disgracefully, were the Social Democrats, who have been slithering downhill everywhere since they joined Merkel & Co. in a joint national government. Their Bavarian vote was an incredibly low 9.9 percent, their very worst result anywhere in Germany in 70 years. Here too there are some who enjoy Schadenfreude; Social Democratic leaders have too long played a sad role – between weak knees and hypocrisy – and are increasingly heading towards insignificance. Some say “Good riddance to bad rubbish” and expect an almost equally poor showing in the important state election in Hesse on October 28 (the last vote this year).

But who gained the votes lost to those two parties – which still run the federal government in an increasingly divorce-threatened marital arrangement? One gainer was the Bavaria-only Free Voters Party, a largely rural gathering catering to the lederhosen-and-dirndl crowd in Alpine leas and villages. It will now probably join in a new governing coalition in Munich.

The major gainer, however, was the Green party, which soared from 10 percent in 2013 to over 18 percent this time, putting them in an almost mind-boggling second place. Considered a wildly radical bunch years ago, fighting on environmental issues while wearing or knitting woolen sweaters right in Bundestag sessions, they have sobered up considerably as many members got older and much better off, frequently in well-paid professions. They still talk ecology but not much about the rights of working people and even less about opposing war. They do oppose the anti-immigrant policies of those on the right. In any case, since they are not in either the Bavarian or the federal government, and thus not part of “the Establishment”, they have become the surprising choice for many of those who are unhappy, insecure and often ill-treated.

Others, Alpine-isolated or very Catholic-bound, but also angry and worried, still see the Greens as a bunch of wild-eyed, long-haired or (God help us) even gay hippies and fear every darker skin-color or any woman with a head cloth and an assumed IS terrorist hiding behind her. Those are the ones who voted for the AfD which, with almost 11 percent, finally won seats in the legislature. Not as many as they expected but from a federal viewpoint more than frightening.

Behind all the current percentage arithmetic, and the tense wait for the election results on October 28t in Hesse, the rapid drop in support for the two traditional ruling parties could lead to a breakup of the federal government. And that could very well necessitate new elections, with the AfD already balancing nation-wide on or around a strong second place. That is the growing worry of a large slice of the electorate – and helps explain the Berlin parade described in my earlier paragraphs.

What about the LINKE, which should have gained strength from the spreading dissatisfaction, but has been stuck nationally at 9-11 percent and in Bavaria, despite hopes for a miracle, was again unable to reach the required 5 percent level to win even a few seats in the legislature of Bavaria, its weakest region. It did indeed increase its vote of five years ago from 185,000 (1.1 percent) to 436,000 on Sunday, just over 3 percent, a number which would be envied in some countries. Now the LINKE is hoping for a predicted 8 percent in more enlightened Hesse (with Frankfurt).

There were lots of angles last weekend. Can those two days be judged as successful? I must return to the same indecisive answer: Jein!