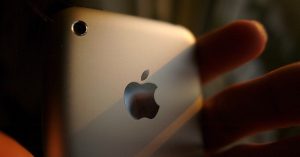 Owning an iPhone could someday mean being blocked from recording anything that someone in power doesn’t want you to record.

That’s the potential ramification of a patent granted to Apple earlier this week for technology that remotely disables iPhone cameras by infrared sensors.

While Apple’s patent application uses the example of a rock band preventing audience members from recording a concert, since the application was first submitted back in 2009 observers have noted that the technology could also be used by police, repressive governments, and anyone in power to stop citizens from recording abuses of power and other injustices.

The patent was approved despite thousands of signatures on a petition seeking to block the technology from being developed.

“Here’s the rub. The First Amendment and Article 19 of the U.N.’s Declaration on Human Rights don’t really apply to the corporations that build these cellphones and run these social networks. Free speech rules don’t apply to Silicon Valley,” wrote the civil liberties group Free Press back in 2011, and Apple’s “cellphone camera kill switch can be used as a pre-emptive strike against free speech. ”

Approval for the patent was also granted amid increasing use of smartphone technology to record abuses of power, whether that is everyday citizens recording police brutality, House Democrats recording their sit-in for gun control after Speaker Paul Ryan shut off C-SPAN cameras, or peaceful protesters recording assaults by police.

Critics note that it’s not hard to imagine police officers disabling all iPhone cameras in the vicinity before taking any action—whether legal or illegal—against people.

Technology website Engadget illustrated the argument with a potential situation: “Picture this: You’re out for a stroll on the streets of Vancouver when suddenly you find yourself caught up in a depressed mob of hockey fans. Riot police are striking a young man with their batons near a squad car. You pull out your iPhone to capture a video of this seeming abuse of force—only to see a flashing message on the screen that says ‘Recording Disabled.’

It’s also not hard to imagine Ryan having disabled all iPhone cameras in the House to subdue media coverage of the sit-in: “If the Speaker of the House’s office controls when C-SPAN’s cameras are live, it’s not a stretch to assume it would control when iPhones can work,” as the Guardian writes.

And critics observe that it’s much more difficult to pursue justice when no record exists of an injustice happening in the first place.

While Apple garnered praise from privacy activists for its stance against the FBI when the government agency sought its help in unlocking a phone owned by one of the San Bernardino shooters, it’s also been pointed out that technology companies don’t have a spotless record on civil liberties.

Indeed, NSA whistleblower Edward Snowden “is skeptical of the motives of tech companies,” according to a recent profile in New York Magazine.