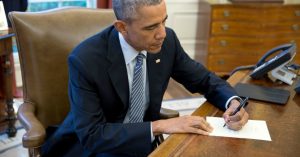 It is the largest single-day granting of clemency in U.S. history. (Photo: IIP Photo Archive/flickr/cc)

“Today’s action will bring hope to so many worthy individuals”

The commutations bring the total of people granted early release under Obama’s administration to 562, more than the past nine presidents combined, according to the American Civil Liberties Union (ACLU). It is Obama’s third use of his clemency powers this year.

“The president made history today. President Obama granted more commutations today alone than any president has granted during their entire time in office since the administration of Lyndon B. Johnson,” said Cynthia W. Roseberry, project manager for Clemency Project 2014, a working group of lawyers and advocates that provides free legal assistance to people who meet the criteria for early release.

“With less than six months remaining in President Obama’s term, I know that today’s action will bring hope to so many worthy individuals and their incredible and heroic pro bono attorneys from across the country awaiting a decision by the president on their clemency petitions,” Roseberry said.

Of the hundreds granted clemency, nearly all of them were serving time for nonviolent drug offenses; 67 had life sentences. It is Obama’s latest effort to address the mass incarceration crisis which he said “makes our country worse off” in a rousing address to the NAACP in July 2015.

One of the men freed is Dicky Joe Jackson, who was featured in the ACLU’s 2013 report A Living Death: Life without Parole for Nonviolent Offenses.

Jackson was sentenced to life in prison for conspiracy to transport and sell methamphetamine—which he did, according to the report, in order to pay for a bone marrow transplant for his son. He has already served 20 years.

Most of those granted clemency will be released on December 1. For others, it will take longer. The Huffington Post notes that one individual, sentenced to life in 2009 for intending to distribute thousands of kilograms of marijuana, merely had his time reduced to 30 years.

“We are not done yet,” Deputy Attorney General Sally Yates said. “We expect that many more men and women will be given a second chance through the clemency initiative.”

Mark Osler, a law professor at the University of St. Thomas in Minnesota, said in a statement that, “[w]hile the commutations President Obama granted today are an important step forward, they remind us of how much more work this administration has to do if it is to grant relief for every person eligible.”

Osler helped organize a letter (pdf) in June calling on the administration to address the “bureaucratic inefficiencies” that slow down the clemency review process.

On Wednesday, he said, “We again urge the president to speed up his administration’s review of the petitions it has received and to consider whether there are structural changes to the process that would ensure justice is done for every worthy petitioner.”