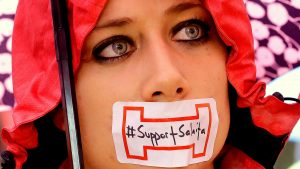 In 2007, it was professional suicide to vocalize criticism of Israel’s apartheid policies that deny basic human rights to the Palestinian population. By 2014, however, this wasn’t necessarily the case.

When Prof. Steven Salaita was denied a tenured position he’d been offered at the University of Illinois, Urbana-Champaign, due to his public criticism of Israel’s bombing of the Gaza Strip in the summer of 2014, it made international headlines and kicked off a firestorm.

Thousands of academics around the world started a boycott against the university. UIUC went begging when qualified candidates hesitated to apply for open positions. And the prestigious American Association of University Professors censured the school — an unusual move, and one reserved for the most egregious of violations.

Before the dust settled, the school had spent over a million dollars in legal fees.

A brief summary of the entire situation may be helpful: Mr. Salaita was a tenured professor at Virginia Tech when he was offered a tenured position in the American Indian Studies program at UIUC. He and his wife quit their jobs and sold their home in preparation for their move to Illinois. Shortly thereafter, Israel began bombing the Gaza Strip and Mr. Salaita expressed his displeasure via social media. Under pressure from wealthy donors, the school’s chancellor, Phyllis Wise, advised Mr. Salaita that the school would not move forward with approving his appointment.

It must be recognized that the meeting to “approve” (read: rubber-stamp) this appointment was not scheduled until after the start of classes. Mr. Salaita, like countless professors before him, would start his teaching responsibilities before this final approval was made. But that didn’t stop Ms. Wise from saying that he really had no offer, a move that brought down the wrath of the academic community on previously-respected UIUC.

In the end, in order to save the money that endless litigation would have cost, the school agreed to pay Mr. Salaita a settlement of $875,000. 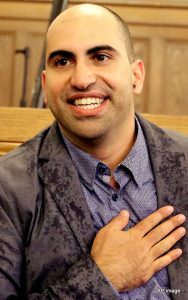 Things were not always so positive for someone denied tenure due to his or her positions on human rights, particularly where Israel and Palestine are concerned.

In 2007, author Norman Finkelstein, a professor at DePaul University in Chicago, was denied tenure. The son of Holocaust survivors, Mr. Finkelstein is an outspoken critic of Israel, and has spoken and written extensively about Israeli crimes against the Palestinians. Nine years ago, such criticism of Israel was inexcusable in the United States.

At the same time tenure was denied to Mr. Finkelstein, Prof. Mehrene Larudee, a strong supporter of Finkelstein, was also denied tenure, despite the unanimous support of her department, the Personnel Committee and the dean.

There was some backlash. Students protested and staged a hunger strike in support of Mr. Finkelstein and Ms. Larudee. The Illinois Conference of the American Association of University Professors, an arm of the association that would censure the UIUC seven years later, wrote to the university’s president, saying: “It is entirely illegitimate for a university to deny tenure to a professor out of fear that his published research … might hurt a college’s reputation.” The letter continued, asserting that the association has explicitly rejected “collegiality” as an appropriate criterion for evaluating faculty members.

In the case of Salaita, the issue of “collegiality” was not raised; “civility” had taken its place.

What made the difference?

One might reasonably ask what made the difference. Why, in 2006, would criticism of Israel cost a professor his livelihood, with little more than a ripple of protest, but less than a decade later, the same basic situation made international headlines, cost a school over a million dollars, and sullied its reputation?

One cannot too readily dismiss the impact of social media. In 2006, Facebook and Twitter were still in their infancy. By 2014, when Israel was carpet-bombing the Gaza Strip, targeting homes, U.N. refugee centers, mosques, hospitals and press vehicles, there were well over 1 billion Facebook users, with 757 million of them using the site daily. Twitter, although dwarfed by Facebook, had approximately 288 million active users by the end of 2014.

These and other social media sites provide a potential worldwide audience to anyone with a camera and Internet connectivity. The old narrative of Israel as the victim of Palestinian aggression no longer holds water, as long as people on the ground are posting photos of the horrendous suffering caused by Israel. The “rocket fire” that Israel so fears — and that it claims it must kill thousands of people in order to prevent — is trifling compared to its response. Palestine, with no army, navy or air force to speak of, blockaded and occupied, is able to cobble together an occasional missile which Mr. Finkelstein has described as “enhanced fireworks.”

For example, in 2014, videos of Israelis sitting in comfortable lawn chairs, watching Gaza being bombed, were widely shared. Publicity about this was not favorable, and such behavior by Israelis further eroded the general support that Israel had enjoyed in the U.S.

It should not be surprising that such a sea change occurred in the academic environment between the time of Mr. Finkelstein’s persecution and that of Mr. Salaita. University campuses are alive with strong human rights activists, many of whom are involved in the Boycott, Divestment and Sanctions movement. The decision of so many academics to boycott UIUC, and of the AAUP to censure it, is merely reflective of the changing times and attitudes.

This is not going to end soon. The minor skirmishes, represented by campus votes on BDS, as well as the major battles, such as Mr. Salaita’s dismissal from UIUC, will only increase in number and intensity. Today, Jewish students who support Zionism will sometimes state that they feel “unsafe” on campus after a successful BDS vote. Yet from the comfort of their luxurious dorms, they don’t consider how “unsafe” the men, women and children of Palestine feel — and actually are — amid the brutal, ongoing Israeli occupation.

The Zionist narrative is strong. Jewish children grow up being taught of the Jewish homeland, but once out of the family confines, they often begin to see things differently. As Israeli government officials decry the BDS movement, they warn darkly that Jewish students who support Palestine and oppose Israel’s occupation of that country are the future leaders of the world. This, of course, does not bode well for Israel or Zionism.

The Salaita situation wasn’t, in and of itself, a watershed moment. It was simply the manifestation of the growing, worldwide recognition of apartheid in Israel. Much of the world has long seen Israel for what it is, and they’ve officially recognized the state of Palestine. The U.S., as was the case with apartheid South Africa a generation ago, is always late to support human rights if doing so could impact either its bottom line or its powerbase. And Israel lobbies are extremely generous to the U.S. lawmakers who toe the line.

While they bode well for the future of Palestine and its people, these new realizations do nothing to change the tragic facts on the ground today. But as the global ostracization of Israel grows, Palestinian freedom becomes inevitable. Those who believe in human rights, dignity and self-determination will continue to speak, write, vote, and otherwise act for those who can do little for themselves. Their efforts will not cease until Palestine is free.