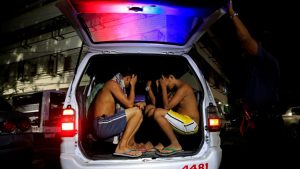 A member of the Philippine National Police stands guard after detaining people as part of the “Rid the Streets Of Drinkers and Youth” operation in Las Piñas City, part of the Manila metro area, on June 1, 2016. / Romeo Ranoco, Reuters

They live among us, plotting crimes and disrupting the lives of upright, hard-working citizens. And if we purge them, our nation will return to its former glory.

In Trump-era America and the Brexiting UK, this sentiment has been nurtured by once-fringe politicians to produce explosive political outcomes.

Their target: immigrants, portrayed as a prime threat to security, common decency and the economy.

But it turns out that, with a significant tweak, this sort of rhetoric can prove politically effective an entire hemisphere away.

On June 30, the Philippines will hand the presidency to Rodrigo Duterte, a 71-year-old ex-mayor and political outsider. His rapid ascent is powered by public rage, which he deftly channels toward villains who lurk in their midst.

Duterte isn’t railing against immigrants, of course. After all, this is the Philippines, where nearly 10 percent of the population seeks a better life abroad — with a combined 3.7 million Filipino citizens living in the US and UK.

Duterte’s bogeymen come from within. They are drug users and drug dealers. And the new president has wished death upon them both.

This is how Duterte talks about addicts, namely people hooked on meth:

“If you are involved in drugs, I will kill you. You son of a whore, I will really kill you.”

“The problem is that once you’re addicted to shabu [Filipino slang for meth], rehabilitation is no longer an option … If I couldn’t convince you to stop, I’ll have you killed … I’ll have to apologize to your family.”

And this is Duterte recruiting armed civilians to join a “bloody war” on drug dealers:

“Feel free to call the police. Or do it yourself if you have a gun. You have my support.”

The incoming president offers a simple narrative: addicts and pushers are to blame for many of society’s ills — dirty cops, menacing streets, even the dysfunctional economy. Wiping them out, he says, will bring an era blessed by social harmony, upstanding officialdom and lots of foreign investment.

While Donald Trump speaks of gun-packing Americans taking aim at rampaging “Islamic extremists,” Duterte goes a step further. He is actively recruiting civilians to go after their neighborhood dealers. If the dealers resist? Shoot them dead. The president may even give you a medal.

“This is serious, I’m afraid,” says Ramon Casiple, executive director of the Institute for Political and Electoral Reform in the Philippines. 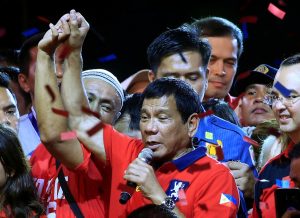 Rodrigo ‘”Digong” Duterte, then the mayor of Davao, speaks at his last political campaign rally before the national elections in Manila on May 7, 2016. Duterte assumes office on June 30. / Romeo Ranoco, Reuters

Filipinos know Duterte as a brash mayor, dripping with machismo, who spent years running a rough city called Davao. “It was the wild, wild west. And he tamed the place,” Casiple says. “He’s known for boldly supporting the killing of known criminals.”

“His promise is that he’ll now do this on a nationwide scale,” he says. “People are excited. From their point of view, here comes someone with political will and a record of fighting the drug business. They don’t care how he does it.”

Methamphetamine is indeed a devastating force in the Philippines. The island nation suffers from one of the highest meth abuse rates in Asia. The nation’s powerful Catholic hierarchy laments that meth sales are “daringly ubiquitous, oftentimes peddled openly in parks, bars and street corners.”

Like Trump talking about Mexican migrants, Duterte has successfully cast meth users as criminally minded zombies prone to rape. In his speeches, addicts and dealers symbolize all that is depraved about the Philippines — a sponge to soak up anger over petty corruption and economic woes.

But meth alone does not explain why more than one-third of Filipinos live on less than $2 a day. Nor is it the reason why income inequality in the Philippines is the worst in Southeast Asia.

Like Americans — even those whose garment jobs were relocated to the Philippines — working-class Filipinos have not fared well under the strain of economic globalization. Each year, weak salaries and labor protections compel millions of Filipinos to leave home in search of better jobs in other countries.

When Duterte isn’t talking about feeding drug dealers’ corpses to fish, he’s promising to stick up for the little guy who suffers under powerful pro-corporate elites.

Among his vows: prohibiting businesses from hiring workers for short stints with no benefits — a common practice in both the Philippines and the US. Days before his inauguration, he boosted his anti-establishment bonafides by swearing to destroy “Imperial Manila,” the seat of entrenched authority.

But economics is complex, after all, and Duterte prefers a more digestible villain-versus-hero narrative. So his screeds inevitably drift back to rounding up addicts and making drug dealers “eat bullets.”

Electing a crass, macho guy from the provinces spits in the eye of the Western-backed dynastic elites in the capital.

In fact, Duterte-loving Filipinos have something in common with Brits voting to exit the EU: a hunger to lash out at the “status-quo loving elites,” according to a Jojo Robles, columnist for the Philippines-based newspaper The Standard.