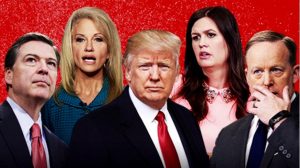 Hey, who’s that guy hiding behind a hedge on the White House grounds?

Why it’s press secretary Sean Spicer, who became so flummoxed over the “unexpected” blowback from the summary execution of FBI Director James Comey that he hid from reporters the other night rather than answer their questions, eventually shouted a statement to them, locked himself in his office for three hours, and then agreed to answer questions only if he was not filmed.

Out went the TV lights, Spicer bobbed and weaved on the same “why was Comey axed?” question for 10 minutes and then ducked follow-up questions.

No word on whether the hedge was the same one that Devin Nunes hid behind in his clandestine meeting with the White House security staffers who fed him information in a comedic effort to bolster Trump’s false claim that President Obama had personally ordered that his Trump Tower phones be tapped in a futile effort to distract from the Russia scandal.

So it has gone for the well-oiled machine known as the Trump administration, and several things are screechingly obvious some three days after the prez doshed Comey:

* Grading the many lies Trump has told on a scale of 1 to 10 since he became president 16 weeks ago, his lie that Comey was fired for mishandling the FBI’s Hillary Clinton email investigations is a solid 12.

* Although I long ago lost count, Trump’s spokesmouths have given ever-shifting versions of why Comey is now spending more time with his family that changed by the hour and were contradicted by Trump himself.

* As though he was the last person in the room to get a joke, Trump finally acknowledged the real reason on Thursday. Surprise! It was Scandale de la Russie and not “showboat” Comey.

* The U.S. is teetering on the brink of a constitutional crisis that inevitably recalls the halcyon days of the Watergate scandal, and that Tricky Dick’s sacking of the top scandal investigators that led to his downfall.

* Speaking of Watergate, Trump’s astonishing threat on Friday that he may have secret tapes involving Comey and will cancel future press briefings if there are negative leaks about him was positively Nixonian.

* The next major development in this drama is whether Deputy AG Rod Rosenstein names an impartial special prosecutor to investigate Trump ties to the Russian effort to sabotage the Clinton campaign.

* That the task of naming a special prosecutor falls, by law, to Rosenstein is another strand in this Gordian knot of a mess since Rosenstein has compromised his most valuable asset — his impartiality.

* Trump’s legislative agenda — including tax cuts for the rich andcorporations and getting Trumpcare through the Senate — is effectively crippled until the president agrees to appointment of a special prosecutor.

* Trump will not agree to appointment of a special prosecutor because it would be like signing his own death warrant since he well knows what lurks at the heart of the Russian campaign to sabotage the 2016 election. Himself.

* Vichy Republicans may try to ram through appointment of a toady replacement for Comey and will block calls for a special prosecutor, provoking a revolt by career FBI professionals that cannot be contained.

* Anyone in criminal jeopardy, beginning with fired national security director and Russia suck-up Michael Flynn, will be substantially more interested in saving themselves than saving the president.

* Trump and his handlers are stupid, politically naïve and so deep in their own fever swamp that they not only failed to anticipate the huge blowback from firing Comey, but will continue to outwit themselves.

* Need an example of Trump’s stupidity? How about him needlessly reigniting his more than decade-old feud with comedian Rosie O’Donnell so he could gloat about firing Comey, which she had called for. Rosie was not amused.

* Need another example? How about Trump meeting with the Russian foreign minister hours after he sacked Comey, leaving U.S. fotogs at the door but allowing in a Russian fotog whose images of the two yucking it up went viral.

* Trump will continue to try to find distractions like his announcement Thursday of a “commission on election integrity” to investigate his baseless allegation that “millions” voted needlessly in the 2016 election.

* People who get too close to Trump get burned, but Jeff Sessions, already toast before being named AG, has now distinguished himself by helping ax the man conducting the probe from which he had recused himself.

* We are still a long way from impeachment, if we ever get there, but Trump’s potentially impeachable offenses continue to pile up, primarily obstruction of justice by threatening Comey and former Acting AG Sally Yates, among others.

What constitutes “normal” these days is anyone’s guess, but there will not be a return to normalcy until the scandal is resolved, the 2018 midterm elections or Trump’s ouster or resignation, whichever and whatever comes first.