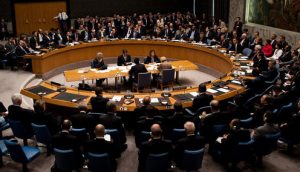 How does the architecture of our brain and neurons allow each of us to make individual behavioral choices? Scientists have long used the metaphor of government to explain how they think nervous systems are organized for decision-making. Are we at root a democracy, like the U.K. citizenry voting for Brexit? A dictatorship, like the North Korean leader ordering a missile launch? A set of factions competing for control, like those within the Turkish military? Or something else?

In 1890, psychologist William James argued that in each of us “[t]here is… one central or pontifical [nerve cell] to which our consciousness is attached.” But in 1941, physiologist and Nobel laureate Sir Charles Sherrington argued against the idea of a single pontifical cell in charge, suggesting rather that the nervous system is “a million-fold democracy whose each unit is a cell.”

So who was right?

For ethical reasons, we’re rarely justified in monitoring single cells in healthy people’s brains. But it is feasible to reveal the brain’s cellular mechanisms in many nonhuman animals. As I recount in my book “Governing Behavior,” experiments have revealed a range of decision-making architectures in nervous systems – from dictatorship, to oligarchy, to democracy. 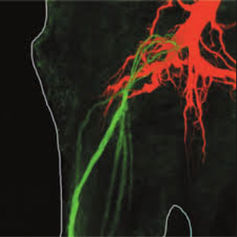 For some behaviors, a single nerve cell does act as a dictator, triggering an entire set of movements via the electrical signals it uses to send messages. (We neurobiologists call those signals action potentials, or spikes.) Take the example of touching a crayfish on its tail; a single spike in the lateral giant neuron elicits a fast tail-flip that vaults the animal upward, out of potential danger. These movements begin within about one hundredth of a second of the touch. 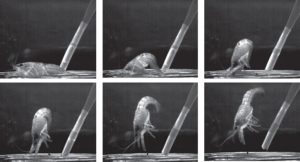 Crayfish escapes thanks to its dictator neuron. Each photo taken 10 hundredths of a second apart. Jens Herberholz and Abigail Schadegg, University of Maryland, College Park

Similarly, a single spike in the giant Mauthner neuron in the brain of a fish elicits an escape movement that quickly turns the fish away from a threat so it can swim to safety. (This is the only confirmed “command neuron” in a vertebrate.)

Each of these dictator neurons is unusually large – especially its axon, the long, narrow part of the cell that transmits spikes over long distances. Each dictator neuron sits at the top of a hierarchy, integrating signals from many sensory neurons, and conveying its orders to a large set of subservient neurons that themselves cause muscle contractions.

Such cellular dictatorships are common for escape movements, especially in invertebrates. They also control other kinds of movements that are basically identical each time they occur, including cricket chirping.

But these dictator cells aren’t the whole story. Crayfish can trigger a tail-flip another way too – via another small set of neurons that effectively act as an oligarchy.

These “non-giant” escapes are very similar to those triggered by giant neurons, but begin slightly later and allow more flexibility in the details. Thus, when a crayfish is aware it is in danger and has more time to respond, it typically uses an oligarchy instead of its dictator.

Similarly, even if a fish’s Mauthner neuron is killed, the animal can still escape from dangerous situations. It can quickly make similar escape movements using a small set of other neurons, though these actions begin slightly later.

This redundancy makes sense: it would be very risky to trust escape from a predator to a single neuron, with no backup – injury or malfunction of that neuron would then be life-threatening. So evolution has provided multiple ways to initiate escape.

Neuronal oligarchies may also mediate our own high-level perceptions, such as when we recognize a human face.

For many other behaviors, however, nervous systems make decisions through something like Sherrington’s “million-fold democracy.”

For example, when a monkey reaches out its arm, many neurons in its brain’s motor cortex generate spikes. Every neuron spikes for movements in many directions; but each has one particular direction that makes it spike the most.

Researchers hypothesized that each neuron contributes to all reaches to some degree, but spikes the most for reaches it’s contributing to most. To figure it out, they monitored many neurons and did some math. 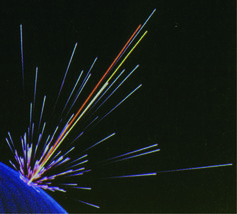 Researchers measured the rate of spikes in several neurons when a monkey reached toward several targets. Then, for a single target, they represented each neuron by a vector – its angle indicates the neuron’s preferred reaching direction (when it spikes most) and the length indicates its relative rate of spiking for this particular target. They mathematically summed their effects (a weighted vector average) and could reliably predict the movement outcome of all the messages the neurons were sending.

This is like a neuronal election in which some neurons vote more often than others. An example is shown in the figure. The pale violet lines represent the movement votes of individual neurons. The orange line (the “population vector”) indicates their summed direction. The yellow line indicates the actual movement direction, which is quite similar to the population vector’s prediction. The researchers called this population coding.

For some animals and behaviors, it is possible to test the nervous system’s version of democracy by perturbing the election. For example, monkeys (and people) make movements called “saccades” to quickly shift the eyes from one fixation point to another. Saccades are triggered by neurons in a part of the brain called the superior colliculus. Like in the monkey reach example above, these neurons each spike for a wide variety of saccades but spike most for one direction and distance. If one part of the superior colliculus is anesthetized – disenfranchising a particular set of voters – all saccades are shifted away from the direction and distance that the now silent voters had preferred. The election has now been rigged.

A single-cell manipulation demonstrated that leeches also hold elections. Leeches bend their bodies away from a touch to their skin. The movement is due to the collective effects of a small number of neurons, some of which voted for the resulting outcome and some of which voted otherwise (but were outvoted). 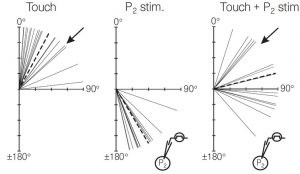 Perturbing a leech movement ‘election.’ Left: researchers touched the animal’s skin at a location indicated by the arrow. Each solid line is the direction the leech bent away from this touch on one trial. Middle: electric stimulation to a different sensory neuron made the leech bend in a different direction. Right: Researchers touched the skin and stimulated the neuron simultaneously and the leech bent in intermediate directions. Reprinted by permission from Macmillan Publishers Ltd: J. E. Lewis and W. B. Kristan, Nature 391: 76-79, copyright 1998

If the leech is touched on the top, it tends to bend away from this touch. If a neuron that normally responds to touches on the bottom is electrically stimulated instead, the leech tends to bend in approximately the opposite direction (the middle panel of the figure). If this touch and this electrical stimulus occur simultaneously, the leech actually bends in an intermediate direction (the right panel of the figure).

This outcome is not optimal for either individual stimulus but is nonetheless the election result, a kind of compromise between two extremes. It’s like when a political party comes together at a convention to put together a platform. Taking into account what various wings of the party want can lead to a compromise somewhere in the middle.

Numerous other examples of neuronal democracies have been demonstrated. Democracies determine what we see, hear, feel and smell, from crickets and fruit flies to humans. For example, we perceive colors through the proportional voting of three kinds of photoreceptors that each respond best to a different wavelength of light, as physicist and physician Thomas Young proposed in 1802. One of the advantages of neuronal democracies is that variability in a single neuron’s spiking is averaged out in the voting, so perceptions and movements are actually more precise than if they depended on one or a few neurons. Also, if some neurons are damaged, many others remain to take up the slack.

Unlike countries, however, nervous systems can implement multiple forms of government simultaneously. A neuronal dictatorship can coexist with an oligarchy or democracy. The dictator, acting fastest, may trigger the onset of a behavior while other neurons fine-tune the ensuing movements. There does not need to be a single form of government as long as the behavioral consequences increase the probability of survival and reproduction.