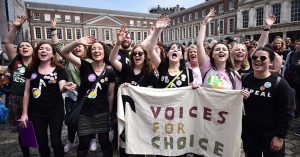 DUBLIN, IRELAND – MAY 26: Yes vote supporters celebrate as the results in the Irish referendum on the 8th amendment concerning the country’s abortion laws takes place at Dublin Castle on May 26, 2018 in Dublin, Ireland. Savita Halappanavar who became the symbol of the Yes campaign to repeal the 8th amendment died aged 32 due to complications following a septic miscarriage in Galway, 2012. Voters in Ireland went to the polls yesterday to decide whether to abolish or keep the 8th amendment which makes it illegal for a woman to have an abortion in the country unless in certain circumstances where her life is at risk. Exit polls indicated that the Yes vote has won by a landslide majority and the No campaign has conceded defeat. (Photo by Charles McQuillan/Getty Images)

Ireland, one of Europe’s most socially conservative countries, has voted by a landslide to liberalize the world’s most restrictive abortion laws.

Ireland, one of Europe’s most socially conservative countries, has voted by a landslide to liberalize the world’s most restrictive abortion laws.

Votes are still being counted Saturday but both sides agree with exit polls showing a 2-1 nationwide vote to #RepealThe8th.

“The public have spoken. The result appears to be resounding… in favor of repealing the 8th Amendment” constitutional ban on abortion, Prime Minister Leo Varadkar, who campaigned for repeal, told journalists in Dublin.

“What we see is the culmination of a quiet revolution that has been taking place in Ireland over the last couple of decades,” said Varadkar, who became the country’s first openly gay prime minister last year.

Emotional pro choice campaigners singing at Dublin Castle awaiting the formal announcement that Ireland has repealed the constitutional amendment that all but bans abortion in the state. #8thRef #HomeToVote pic.twitter.com/T71ZmEzdcu

Its official: Ireland voted to #RepealThe8th! We’re inspired by the men and women of Ireland who stood up to reaffirm every woman’s right to make decisions about her own body and control her own destiny and to create a country that shares their values. pic.twitter.com/KBBgK4iFb7