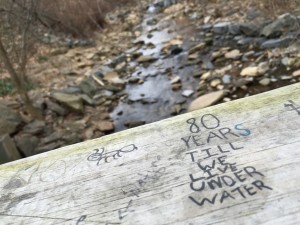 Bridge over the Stony Run, Baltimore. Photo by Anand Pandian.

We write in the midst of a dramatic revaluation of the epoch at hand, as a subcommission of the International Commission on Stratigraphy weighs whether to identify this era with the deeds and tracks of the human species—as an Anthropocene. While the geologists continue their deliberations, this name has already spread into domains as disparate as history (Chakrabarty 2009), poetry (Bristow 2015), and contemporary art (Davis and Turpin 2015) with astonishing speed, dislodging familiar terms like nature and environment from their customary preeminence as signs of the world beyond ourselves. Of course, the point is precisely this: that that world exists no longer, or makes less sense than it ever did, given the pervasive and undeniable presence of human activity or consequence wherever we turn now on this planet of ours. What can anthropology contribute toward these urgent concerns? We hope this lexicon may grow into a resource helpful for this task.

These times offer a unique challenge to anthropology. On the one hand, as Bruno Latour (2014) reminded us so eloquently at an annual meeting of the American Anthropological Association, the Anthropocene would appear to be a gift to anthropology—everyone, all of a sudden, seems concerned about that peculiar creature, anthropos, near and dear to us alone for so long. On the other hand, as we have also seen, the figure of the human towers in this new discourse at a gargantuan scale hardly fathomable from the ground we anthropologists work so diligently. The Anthropocene gift is a present armed with teeth, with a hau of demands and reciprocal tethers that have left many anthropologists cautious, even reluctant, to embrace its tale of overwhelming human agency. Critics (e.g., Malm and Hornborg 2014) have found the term itself too anthropocentric and misleadingly general in scope, too keen on evidence of Man and of “our” collective imprint on the globe, to the exclusion of profound differences of responsibility and vulnerability with regard to contemporary ecological crises. And pronouncing an epoch in our own name does seem to be the ultimate act of apex species self-aggrandizement—less a geological -cene, perhaps, than an Anthroposcene (Pandian 2015), a picture of the world as dominated by ourselves.

What would it take to see this time and its configurations, agencies, and effects otherwise? The question is no doubt a crucial one. Look at the fossil fuel lobby and its American congressional acolytes, and you may well wonder about the mammals biding their time in the shadow of the dinosaurs. Or about the Proterozoic microbes that ushered in an oxygenated world deadly for those who came before them. Radical change is afoot, no doubt. And there is much at stake in how we read and interpret these incipient vectors and tendencies, how we describe what is happening now and how we plot potential paths from this present to other, hopefully less troubling futures. This lexicon is committed to the value of smaller scales of analysis and more confounding perspectives—the classic orientations of anthropology. We recognize the gravity of the global events and forecasts that invest the present with its widespread air of crisis, urgency, and apocalyptic possibility. All the same, we hold that climate change and other expressions of threat and uncertainty at a worldwide scale demand a bifocal perspective, in which global optics like the Anthropocene are matched with careful reflection on the potentials, both positive and negative, of particular forms and arrangements of life and substance.

What happens, for example, when the destruction of forests for mineral resources is conceived from the standpoint of enduring indigenous relationships with the land, or the ecopolitics of those who insist on collaborating with the forest as a sentient being? How would our sense of human power shift if we acknowledged the animals and other living beings we borrow our capacities from, or the photosynthesis that imbues the planet with so much of its available energy? Lodged in such terms are stories that can help us to imagine the fearsome domain of human agency in unexpected ways. In thinking with such terms and their conceptual and imaginative possibilities, we seek to confront the challenge of vision and sensibility, of finding new means of conceiving, engaging, and expressing the felt impasses of the present. We aim to avoid the perils of pessimism and panic that characterize so much Anthropocene discourse, and to generate new ways of apprehending this unprecedented moment.

This project began as a roundtable at the 2015 annual meeting of the American Anthropological Association in Denver, Colorado. Soon thereafter, as climate negotiators hammered out a new international agreement in the conference rooms of Paris, an Icelandic artist mounted an installation on that city’s streets that shared a certain kinship with this endeavor of ours. “Ice Watch,” by Olafur Eliasson, arranged massive boulders of glacial ice in a circle mimicking a watch and compass. “From the perspective of the ice,” the artist said, speaking of these crackling and dripping forms, “humans look really warm.” The ontological challenge of such perspectivism (cf. Viveiros de Castro 1998) matters deeply. Think of the ecological ramifications of a new viewpoint on the earth as a whole in the 1970s, from the vantage point of the cosmos beyond. We may sense it now by tuning into the peculiar cascade of sounds that accompany a glacier in melt. Atmospheric conditions come into focus anew with attention to the distribution of winds and contaminants. So does petroleum, when we tail the careening dreams and fantasies that the substance occasions.

This collaboration first sprung to life as a “pop-up” panel, with contributions emerging on the fly amid the tumult of an annual academic carnival. The mood was improvisational, akin to those weeds and mushrooms and other such life forms that burst up out of place in environments where they don’t quite belong, making do with whatever lies close at hand. Some have begun to describe humanity itself as a “weedy species” (Wake and Vredenburg 2008, 11472), populating ever more spaces and adapting to whatever adversities those spaces present. The natural analogy may be alarming, as with the trajectory it seeks to comprehend. But given the feral geographies (Tsing 2015) and disrupted grounds that compose more and more of our world, there is something crucial to be gleaned from the workings of this improvisational spirit. For there is no doubt that new dreams are necessary, germinating unexpected ideas and novel forms of realization. We are faced with circumstances undeniably beyond our control, as hyposubjects rather than wielders of a putative mastery. Can we learn new ways of being plastic or malleable in the face of these conditions, approaching the transmogrification of the ecosphere in a spirit of experimentation rather than existential dismay? Even nature may prove an essential resource for the storying and becoming that these circumstances demand, as a material and conceptual reservoir of irreducible alterity.

More than anything else now, we face a call to be timely, of confronting squarely and somehow making livable this time of ours, a call that resounds with incomparable scale and scope. Should we fall in with that name for this time, the Anthropocene, or cast our lot instead with one of its many provocative alters? Anthrobscene (Parikka 2015), Chthulucene (Haraway 2015), Eurocene (Grove 2016), Misanthropocene (Clover and Spahr 2014), Plasticene (New York Times 2014): the list goes on and each tilts otherwise, a field of possibilities that comes into focus and spins ever away. Maybe it all comes down to the flickering promise of what we might just call, with a nod to software junkies everywhere, a Betacene: a time to test, engage, and experiment with new ways of being in the world and with the world. We may yet have the chance to reverse-engineer ourselves toward a less imperfect humanity. This lexicon is meant as a site to imagine and explore what human beings can do—have already been doing—differently with this time.

Latour, Bruno. 2014. “Anthropology at the Time of the Anthropocene: A Personal View of What Is To Be Studied.” Distinguished lecture, Annual Meeting of the American Anthropological Association, Washington, DC, December 6.

Tsing, Anna Lowenhaupt. 2015. The Mushroom at the End of the World: On the Possibility of Life in Capitalist Ruins. Princeton, N.J.: Princeton University Press.