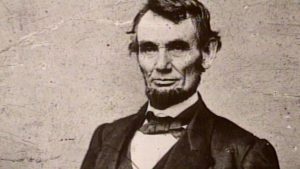 One hundred seventy-nine years ago today, January 27, 1838, Abraham Lincoln gave the Lyceum Address, Abraham Lincoln said: If destruction be our lot, we must ourselves be its author and finisher. As a nation of freemen, we must live through all time, or die by suicide. We are living in a divided country with a President who seems determined to be divisive. Perhaps Lincoln’s warning might not seem appropriate. Perhaps we are not moving toward to that point.

But Lincoln spoke those words twenty-two years before the United States was torn apart by a civil war that threaten the very concept of a democratic form of government. Right now we have a President who has reportedly issued gag orders for some federal agencies. The President has a counselor who talks about “alternative facts. The President’s chief adviser views the press as an opposition party and wants the press to be quiet. Attempting to silence the press is an attempt to violate the First Amendment.

In that speech, Lincoln also said “I know the American People are much attached to their Government;–I know they would suffer much for its sake;–I know they would endure evils long and patiently, before they would ever think of exchanging it for another. Yet, notwithstanding all this, if the laws be continually despised and disregarded… the alienation of their affections from the Government is the natural consequence; and to that, sooner or later, it must come.”

Abraham Lincoln believed the solution was for “every American, every lover of liberty, every well wisher to his posterity, swear by the blood of the Revolution, never to violate in the least particular, the laws of the country; and never to tolerate their violation by others.”

Lincoln’s words were spoken in a different time under different circumstances. A mulatto man had been burned by a mob in Saint Louis and mob violence was a serious issue. We do not have those same issues. What we do have is a Presidential administration with policies that go against the grain of who we are as a people and a country dedicated to freedom. What we have is a President who wants to betray the very essence of liberty which is reflected in the Lady in the harbor. You know, the one with the torch, the “Mother of Exiles originally named “Liberty Enlightening The World.

Abraham Lincoln called on the young men who heard his speech and every one else to vow to uphold the laws and not accept others violating those laws. We must be ever ready to make that same vow to protect our liberty and our country or we shall finally lose what Abraham Lincoln called “This last best hope of earth.”