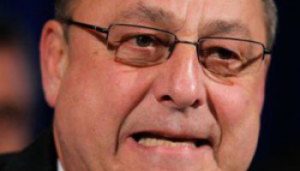 Maine’s Governor Paul LePage is a very busy man. When he’s not out looking for drug dealing, white woman impregnating black guys named “D-Money, Shifty, and Smoothie;” the governor’s sharing his wisdom as to why it’s better to allow drug addicts to overdose rather than save their lives.

On Wednesday, LePage vetoed a bill created to help save the lives of opiate addicts who overdose. The legislation would have given pharmacies the power to sell naloxone, a medicine that counteracts opioid overdoses, without a prescription.

Maine lawmakers tried to fast-track the bill to the Governor’s desk in an attempt to address Maine’s growing death toll from opiate overdoses.

However, LePage felt that he was morally justified in killing the bill:

Naloxone does not truly save lives; it merely extends them until the next overdose,” LePage wrote, repeating a contention that has caused controversy before. “Creating a situation where an addict has a heroin needle in one hand and a shot of naloxone in the other produces a sense of normalcy and security around heroin use that serves only to perpetuate the cycle of addiction.

While LePage sneers down at drug addicts from his moral “high horse,” Maine witnessed record overdose deaths in 2015. Maine Attorney General Janet Mills announced in December that “the state is on pace to reach between 230 and 250 overdose deaths” for 2015.

Surprisingly, local law enforcement and the private sector have led the fight against opiate overdose deaths in Maine. Bangor police and other law enforcement agencies around the state have established jail diversion programs for offenders with drug addictions, that offer treatment and community service rather than just jail time. Mills also mentioned the importance of naloxone as a tool needed by local law enforcement:

This office is encouraging all departments to have Naloxone available, though it is more frequently employed by EMTs and hospital ER staff,” Mills wrote in an email, referring to the drug that helps revive overdose victims. “We had figures from last year that showed EMT responses to apparent ODs tripled over the year before.

Private companies like CVS and Rite Aid pharmacies have joined the battle by offering naloxone without a prescription in about 30 other states. CVS requested the bill after they received a letter from Maine Senator Angus King imploring that they expand their prescription-free program to Maine.

However, LePage, who’s also an enthusiastic Donald Trump cheerleader, obviously knew better than all the so-called experts. Thanks to the governor, Maine can expect another record-setting year in overdose deaths.