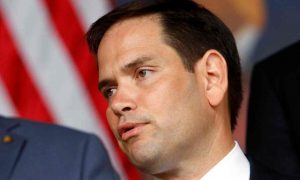 Florida senator Marco Rubio has said women infected with the Zika virus should not be allowed to have abortions, even if their babies have microcephaly, the severe developmental disorder than can result from infection with the disease.

“If I’m going to err, I’m going to err on the side of life,” the Republican told Politico. Rubio, who has championed Zika funding bills in the Senate, also blamed Democrats for the failure to pass such federal aid.

According to Centers for Disease Control and Prevention (CDC) figures, Florida is the state second-worst affected by Zika, after New York, but is the only state to have infections caused by local mosquitoes. Most Zika cases in the US have been found in people who travelled to affected countries and territories.

On Sunday, the Florida governor, Rick Scott, told NBC that despite his state having identified 16 cases of mosquito-borne Zika infections, “what we’re doing is working.”

Scott also called for increased federal aid, in addition to the several million Barack Obama has released in existing grants. On Friday, the federal Food and Drug Administration cleared a private company to release genetically altered mosquitoes which could help the fight against Zika on an island in the Florida Keys. The project will be subject to a local referendum in November.

Rubio ran unsuccessfully for the Republican presidential nomination and only recently decided to run for re-election rather than give up public life. During the presidential campaign, he said he was opposed to abortion in all instances, including in cases of rape or incest.

“I understand a lot of people disagree with my view – but I believe that all human life is worthy of protection of our laws,” he said on Saturday. “And when you present it in the context of Zika or any prenatal condition, it’s a difficult question and a hard one. But if I’m going to err, I’m going to err on the side of life.”