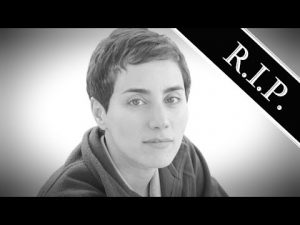 On July 14, Maryam Mirzakhani, Stanford professor of mathematics and the only female winner of the prestigious Fields Medal in Mathematics, died at the age of 40.

In just a few hours, her name, both in her native Farsi (#مریم میرزاخانی) and English (#maryammirzakhani), was trending on Twitter and Facebook. Most major news agencies were covering the news of her death as well as recounting her many achievements.

The grief was especially hard-hitting for a generation of younger academics like me who have always held Maryam as a role model whose example is helping redefine women’s status in science and especially mathematics.

The irony was that Maryam always tried to avoid the media’s spotlight. Her modesty and simplicity despite being the only woman to gain such high status in the world of mathematics – winning what’s often called the “Nobel Prize of math” – stood out to those who knew her.

Unfortunately, I did not get the chance to meet Maryam personally. But like many of my Iranian peers in academia, I looked to her example as proof that the world would welcome us and our scientific contributions no matter our skin color, nationality or religion.

As people around the globe grieve the loss of this talented mathematician, Maryam’s life stands as an inspiration for young girls and boys from all walks of life the world over.

Maryam Mirzakhani in her own words in a video by the Simons Foundation and the International Mathematical Union.

Steady advances of a hardworking genius

Despite her calm expression and warm smile, Maryam was a warrior. She and her family, alongside many other Iranians, lived through the hard economic and social transformations after the Iran revolution in 1979 and also survived the eight years of the Iran-Iraq war a few years after that.

Maryam originally wanted to be a writer, a passion of hers that never faded away even during her postgraduate studies. However, she found an even greater joy in how rewarding it felt to solve mathematical problems. As a student, she was the first female member of Iran’s national team to participate in the International Math Olympiad, and she won two gold medals in two consecutive years – still a record.

She received her bachelor’s degree from Sharif University of Technology in Iran and later a doctorate from Harvard. In 2014, Maryam was recognized with the Fields Medal, the highest-ranking award in mathematics, for her efforts in what’s known as hyperbolic geometry. Her work focused on curved surfaces – such as spheres or donut shapes – and how to understand their properties. Her achievements have applications in other fields of science including quantum field theory, engineering and material science, and could even influence theories around how our universe was born.

Maryam was a “hall of fame” all by herself. She modestly attributed her own success to her perseverance, hard work and patience. As she put it:

“The beauty of mathematics only shows itself to more patient followers.”

Unfortunately, when she was honored with the Fields Medal, she was already tackling her last challenge, the breast cancer that eventually killed her.

Who she was, not just what she did, matters

Maryam’s contributions to the field of mathematics will long be remembered. But just as important is her legacy as a role model.

Maryam was an Iranian, a woman and an immigrant to the United States. Unfortunately, these three words together raise red flags for some in Western countries, particularly in the U.S., in the time of Trump’s proposed travel ban.

Against all odds, Maryam’s talent was nurtured in Iran and later flourished in the U.S. Her successes discredit the xenophobic stereotypes that are encouraged by a politics of fear. Maryam defied expectations and rose above all the labels that make it easy to judge others who are not like “us.”

Maryam’s legend may continue to grow after her early death. Still only 20 percent of full-time math faculty at U.S. universities are women, according to a 2015 demographic survey of 213 departments by the American Mathematical Society. Research shows that stereotyped role models can influence whether people “see themselves” in certain STEM careers. The example of a woman who rose to the top of this still very male field may help inspire math’s next generation.

In the same way people think of Marie Curie or Jane Goodall as scientific pioneers, Maryam Mirzakhani will go down in history as a trailblazer as well as a mathematical genius.