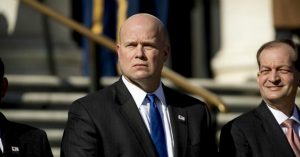 The significant authority of attorney general “calls for the highest levels of integrity and personal judgment, prerequisites safeguarded by the Constitution’s command that principal officers be subject to the oversight and check provided by Senate confirmation.”

The state, according to the New York Times, is requesting an injunction to prevent Whitaker from acting as attorney general, arguing that under federal law, the position should instead belong to Deputy Attorney General Rod Rosenstein, who has been overseeing Special Counsel Robert Mueller’s probe of alleged election meddling and obstruction of justice since Sessions recused himself.

Trump’s appointment of Whitaker, an outspoken critic of the Mueller investigation, has been widely denounced as a ploy hamstring the probe.

The action comes as part of an ongoing case about the Affordable Care Act in which Sessions is named as a defendant. As Sessions is no longer the nation’s top law enforcement official, Judge Ellen L. Hollander of the Federal District Court for the District of Maryland must decided who is the legal successor in the case.

While the Trump administration has claimed that Whitaker meets all requirements under the Federal Vacancies Act of 1998, Maryland, as the Times reports, argues that under the Attorney General Succession Act and the appointments clause of the Constitution—which states that “principal officers” of the federal government must be appointed “with the advice and consent of the Senate”—Sessions’ successor must be Rosenstein until the Senate confirms a permanent replacement.

The significant authority of attorney general, the filing reportedly declares, “calls for the highest levels of integrity and personal judgment, prerequisites safeguarded by the Constitution’s command that principal officers be subject to the oversight and check provided by Senate confirmation.” The president, it states, may not “bypass the constitutional and statutory requirements for appointing someone to that office.”