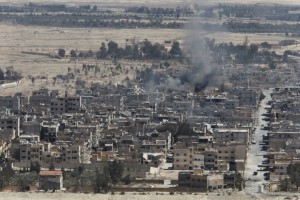 BEIRUT (Reuters) – Syrian troops have identified 45 bodies so far in a mass grave found in the city of Palmyra after it was recaptured from Islamic State, a military source told Reuters on Saturday. 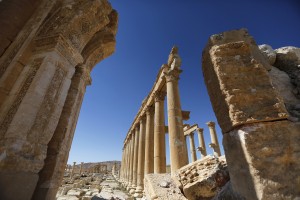 A view shows the damage at the Monumental Arch in the historical city of Palmyra, in Homs Governorate, Syria April 1, 2016. REUTERS/Omar Sanadiki

The communal grave, on the north-eastern edge of Palmyra, is the only one found so far in the city by the Syrian forces, the source said. It held the bodies of both civilians and Syrian army members captured by Islamic State.

Syrian state news agency SANA said on Friday the grave contained many women and children and some of the bodies had been beheaded.

In May last year, as Islamic State took control of Palmyra, the hard-line Islamist militants were reported by Syrian state media to have killed at least 400 people in the first four days of control.

The Syrian Observatory for Human Rights, which monitors the five-year-old Syrian conflict through a network of sources on the ground, said that Islamic State had killed a number of people at an earlier time and buried them on the outskirts of the city.

The Observatory reported on Saturday that fighting between Syrian forces and Islamic State around Qaryatain to the west of Palmyra. It also reported, and Russian and Syrian air strikes in the same area and to the east of Palmyra around the town of Sukhna.

Attacks by government forces against Islamic State positions to the around Palmyra are aimed at moving east across the desert to Islamic State-held Deir al-Zor near the Iraqi border, Syrian President Bashar al-Assad has said.