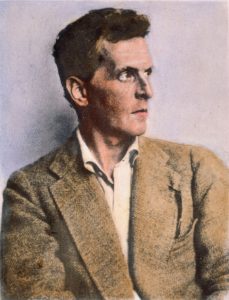 Ludwig Wittgenstein (1889 – 1951) was one of the most important philosophers of the twentieth century. Wittgenstein made a major contribution to conversations on language, logic and metaphysics, but also ethics, the way that we should live in the world. He published two important books: the Tractatus Logico Philosophicus (1921) and the Philosophical Investigations (1953), for which he is best known. These were major contributions to twenty century philosophy of language.

Wittgenstein was a difficult character. Those who knew him assumed he was either a madman or a genius. He was known for working himself up into fits of frustration, pacing about the room decrying his own stupidity, and lambasting philosophers for their habit of tying themselves in semantic knots. In his favour, Wittgenstein was not afraid to admit his own mistakes. He once said: ‘If people never did anything stupid, nothing intelligent would ever get done’. He also said: ‘I don’t know why we are here, but I’m pretty sure that it is not in order to enjoy ourselves’. Students approached his classes at Cambridge University with due trepidation, never sure if they were about to witness a brilliant act of logical deconstruction or the implosion of a tortured mind.

Sometimes a crisis can be productive. Wittgenstein, who was constantly in the grip of some kind of intellectual cataclysm, tended to advance his thinking by debunking what he had previous thought to be true. The best example is his celebrated about turn on the nature of language. In the Tractatus Logico Philosophicus, Wittgenstein argued for a representational theory of language. He described this as a ‘picture theory’ of language: reality (‘the world’) is a vast collection of facts that we can picture in language, assuming that our language has an adequate logical form. ‘The world is the totality of facts, not of things’, Wittgenstein claimed, and these facts are structured in a logical way. The goal of philosophy, for early Wittgenstein, was to pare language back to its logical form, the better to picture the logical form of the world.

Wittgenstein’s early work inspired a generation of logical positivists – critical analytic thinkers who set out to debunk unverifiable ‘pseudostatements’ in an effort to define the limits of meaningful language. ‘That whereof we cannot speak, thereof we must remain silent’, Wittgenstein intoned in the closing passages of the Tractatus. To become a philosopher, one must learn to hold one’s tongue. Logical positivism was a powerful movement that defined the shape of analytic philosophy well into the 1960s. However, it was undercut by the work of the same man who was its founder. By the 1930s, Wittgenstein had decided that the picture theory language was quite wrong. He devoted the rest of his life to explaining why. ‘Resting on your laurels is as dangerous as resting when you are walking in the snow’, he commented. ‘You doze off and die in your sleep’.

Wittgenstein’s shift in thinking, between the Tractatus and the Investigations, maps the general shift in 20th century philosophy from logical positivism to behaviourism and pragmatism. It is a shift from seeing language as a fixed structure imposed upon the world to seeing it as a fluid structure that is intimately bound up with our everyday practices and forms of life. For later Wittgenstein, creating meaningful statements is not a matter of mapping the logical form of the world. It is a matter of using conventionally-defined terms within ‘language games’ that we play out in the course of everyday life. ‘In most cases, the meaning of a word is its use’, Wittgenstein claimed, in perhaps the most famous passage in the Investigations. It ain’t what you say, it’s the way that you say it, and the context in which you say it. Words are how you use them.

Communication, on this model, involves using conventional terms in a way that is recognised by a linguistic community. It involves playing a conventionally accepted language game. 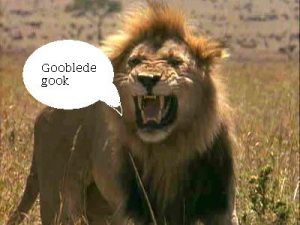 ‘If a lion could talk, we should not be able to understand him’, Wittgenstein argued, because the language games of lions are too different from our own to permit understanding. It is worth noting, as an aside, that Wittgenstein’s theory does allow that lions have a language, based in the social dynamics of their hunting and mating activities. The roaring of two adult male lions, challenging each other for leadership of the pride, is arguably as much of a language gaming activity as the banter of two human rivals, each attempting to outdo the other through a play of words. We are a long way from the formalistic view of language described in the Tractatus. We have left the Platonic realm of pure logic and rediscovered the world.

Wittgenstein’s view of language as social practice is instructive for anyone who seeks to communicate clearly and effectively. Writers and communicators are always told to think about the audience that they are speaking to and to craft their communiques accordingly. Wittgenstein’s philosophy pushes this point of view beyond linguistics into ethnography. In order to communicate with a social tribe, listen to how they play with language. In many cases, slang, banter, and jokes are not poorly structured ‘secondary’ forms of communication, but a coded means of crafting pointed exchanges within a community. A picture, they say, is worth a thousand words, but a well-timed joke can express a world-view. Wittgenstein once said that a ‘serious and good philosophical work could be written consisting entirely of jokes’.

Jokes are not ephemera. They may be logically incoherent (this is often what makes them funny), yet they play an important role in the language games that bind a community together.

Wittgenstein’s view of language is also important for anyone engaging in philosophy. The dictum: ‘In most cases, meaning is use’ serves as a vital corrective for the impulse to launch into vague metaphysical speculations premised on the misuse of words. Take the word ‘God’, for example. The contemporary debate between atheists and believers is premised on the idea that the word ‘God’ either represents something in the real world, or it does not. Believers argue that it does (and tie themselves in knots trying to verify this claim), while atheists argue that it doesn’t. However, both parties to this debate unwittingly rely on a picture theory of language. On this theory, language represents facts about the world. What is says is either true or false. Never the twain shall meet.

A Wittgensteinian approach to the debate begins by pointing out ‘God’ is a word that has different meanings in the context of different communities. In the context of different linguistic communities, people use ‘God’ in different ways to articulate different facets of experience (consider ‘It’s in God’s hands now’ or ‘When the sun rose, I felt the presence of God’). Another way of thinking about the meaning of ‘God’, therefore, is to see peoples’ use of this term as a move in a social language game – a move that ideally has specific connotations for members of a community. Perhaps the term expresses fidelity to a way of life, as Karen Armstrong argues. Perhaps it expresses wonder in the face of existence. The bottom line is that using a term does not necessarily imply a belief in an entity that corresponds to this term. The meaning of a word hinges on its usefulness in context, not its ideal referent outside of all possible contexts.

Wittgenstein’s teaching has practical value. Why waste time arguing over issues that will never be resolved when the whole thing could be deflated with a simple question: ‘Are we even talking about the same thing?’ If you struggle to overcome the urge to define things too carefully, or find yourself becoming obsessed about the meaning of words and their ‘true’ definition, or if you are convinced, like many philosophers, that the existence of a word logically implies some metaphysical essence, or Platonic form, that corresponds to this word, remember that what gives a word meaning is the conventional social discourse within which it is employed. By attending to the ordinary language contexts that give words their meaning, we can avoid misusing them and trying to make them mean things that they aren’t made to mean. The more that we return words to their home, seeing them in terms of the ordinary language contexts that they work within, the easier it becomes to untie the knots in language and understand what is really being said.