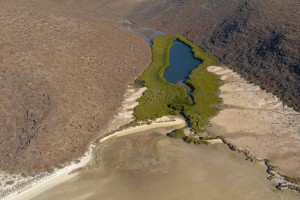 Scientists have long known that mangroves provide vital barriers against storms and that these forests can store vast amounts of carbon.

An article published today in the Proceedings of the National Academy of Sciences highlights again why mangroves are important for coastlines, ecosystems and the planet’s human populations.

This study, however, moves away from the common stories of Indonesian mangroves and concentrates on Mexico, uncovering some surprising new details of desert mangrove forests that grow in lagoons and estuaries adjacent to the coastal desert ecosystems of the Baja California peninsula.

Until now desert mangroves have been somewhat unsung heroes in the mangrove world, assumed to play a minor role compared to their lush forest cousins of the global tropics. The new research finds that desert mangroves provide ecological services that have not been fully appreciated before, including storing carbon and guarding against rising seas in some cases.

Punching above their weight

In late 2013 and 2014, researchers from the Scripps Institution of Oceanography, UC Mexus and the Center for Biological Investigations, La Paz set out along the Mexican Pacific coastline to drill down into the sediments at different mangrove sites to try and get to the bottom of how peat formation occurs and how much carbon is stored below ground. 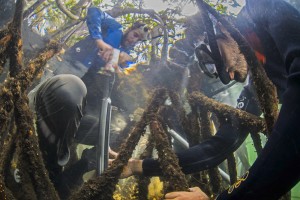 By coring into the sediments at the base of different mangrove root complexes, the researchers were able to quantify how much carbon was stored and at what depth.

The first of their findings showed that mangroves, along with some other scrubs, make up less than 1 percent of Mexico’s arid Northwest, yet store about 28 percent of the total below-ground carbon pool for the region. In other words, for their relatively small area, these dry-land habitats contribute disproportionately high amounts to the desert carbon pool. Only a small fraction of their carbon is exported as carbon dioxide into the air, with much of it staying retained in the deep sediments.

A buffer as seas rise

Short, stunted desert mangroves accumulating and storing carbon at comparable, and in some cases even higher, rates than their tropical counterparts would seem a surprising story in itself, but the research uncovered more. 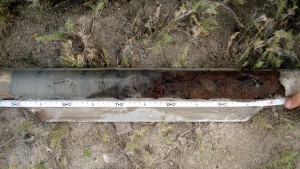 Unable to expand and grow further inland, mangroves situated between the sea and geographic barriers such as hillsides or mountains are able to keep up with rising global sea levels by growing upwards on top of their own peat, the researchers found. Using radiocarbon dating, the team estimates that annual sea levels have risen by 0.7 mm per year over the last 17 centuries.

This historical record suggests that mangrove forests abutting hills can adapt to changing sea levels and in the future act as a buffer against encroaching seas.

However, for those mangroves growing on large flat plains with the possibility of moving inland, past research has shown that sea level rise is still a risk.

What do these insights tell us about the value of mangrove protection?

A previous study found the 10-year discounted value (US$37,500 per hectare per annum) of one hectare of mangrove fringe in Mexico is more than 300 times the official cost set by the Mexican government in 2008. The destruction of mangroves therefore has significant economic as well as ecological impacts for Mexican and the other coastlines that they inhabit. 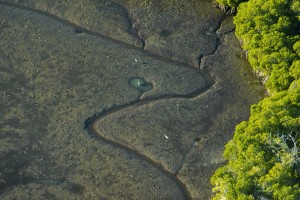 White herons in search of food during a low tide inside a mangrove forest.

With over half of the original global mangrove area already lost and 150,000 hectares disappearing every year, this new research again reiterates the local and global importance of conserving the planet’s remaining mangrove ecosystems.

But what can we do about the mangroves we have already lost to aquaculture operations, industrial development and sea level rise?

Restoration projects are a logical step. Problems with land tenure, knowledge of the ecological requirements necessary for mangrove system reestablishment and the slow rates of growth mean that although restoration will help replenish lost mangroves in the longer term, immediate action is needed to halt the devastating losses these ecosystems are still facing today. 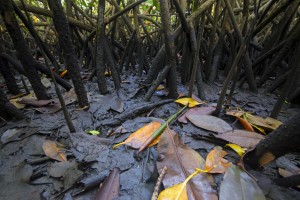 The new study by Paula Ezcurra and colleagues again confirms that mangroves are doing all of us a big favor. Carbon storage, coastal protection and habitat structure for local species are all beneficial ecosystem services that have repeatedly been highlighted by mangrove scientists globally.

In the long term, it seems that much of the challenge will be in convincing governments that conservation and restoration are financially worthwhile. Continuing efforts must therefore be made to enhance both our understanding of these ecosystems and quantifying the economic benefits that they provide. 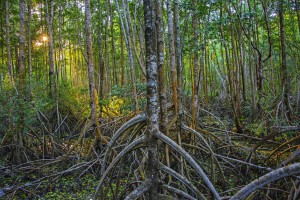