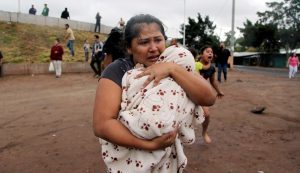 A woman carries a baby affected by tear gas near a barricade erected by supporters of presidential candidate Salvador Nasralla protesting official election results in Tegucigalpa, Honduras, Dec. 18. Since Juan Orlando Hernandez became president, he has moved to crush opposition, and his policies have worsened the already desperate economic situation faced by most Hondurans. | Fernando Antonio / AP

What drives a person to leave their home and walk 2,000 miles?

What drives a person to leave their home and walk 2,000 miles?

I am reminded of the story my mother told me about how she was temporarily blinded at the age of 3 due to malnutrition. And of how she and her mother left Jalisco to head for Juárez when she was 5 because there was no medical care for her ailing mother who had contracted tuberculosis. They had family there that could at least provide some care while her father looked for work.

People do not leave their home, their country, their culture unless they are forced out in search of a better life.

What is that better life that the asylum seekers coming from Central America are seeking? They want to eat. They want medical attention for their children. They want security from persecution by gangs and suppression by their local militaries.

Whole families are traveling together alongside single mothers with children in their arms—all seeking asylum. Many are coming from Honduras, a country plagued by unemployment, where farmers have been displaced by a severe drought caused by climate change, and where massive trade imbalances created by the Central American Free Trade Agreement have created dependence on U.S.-made goods.

As people gathered in preparation for the exodus out of Honduras on the night of October 12, a reporter from NotiBomba walked among the almost 200 people that had assembled and asked them why they were leaving, how will they manage on the journey, and what would they like to say to the President of the United States.

“My child, she suffers from spinal deformity. At each operation, I am told that there is no syringe for the medication or there is no medication for her. I have no money to take her to a private hospital,” one woman says.

A stocky man states, “Lack of jobs, security; we try to start up a small business and they come and destroy it. With the high cost of energy and the high rents, we just can’t make it. We made this decision to build a better future for our children. I am traveling with my entire family.”

“We are not leaving because we do not like this country, but because we have no choice, we need to feed our families,” a young man clarifies.

All mentioned that it was extreme poverty which was driving them out. Although they have tried to make change by voting and demonstrating, they feel nothing has changed at home.

They are referring to the widespread fraud that occurred in the 2017 presidential election in Honduras in which the right-wing candidate, Juan Orlando Hernández was unconstitutionally declared president. Since coming to power, he has used the military to suppress any opposition.

Many people expressed concerns about what they might encounter on the road. “We are afraid of what lies ahead, but we are traveling as one big family, and we will be looking out for each other,” a father comments.

With teary eyes, a young man states, “My family is left crying, sad, and worried because they know the dangers I face, but we don’t have a choice.”

“We ask Trump to give us an opportunity to work, we are hardworking people.”

“Asking Trump to not be so cruel to immigrants…all we want to do is work, nothing more.”

Others point out the complicity of the Trump administration in backing the Hernández coup regime: “Open the doors and give us asylum; it is because of his support for our current government that we are in this situation.”

Trump has steadfastly supported the new president, continuing a long and unfortunate tradition of U.S. government backing for right-wing dictators and authoritarians in Latin America. There are major U.S. economic interests in the region.

When it comes to Honduras specifically, it was the U.S. which provided key support for the 2009 coup which overthrew democratically-elected President Manuel Zelaya. In 2017, the U.S. military establishment feared that a new government might threaten the presence of its large military base at Soto Cano, near Comayagua. Therefore, the right-wing Hernández was the choice of the Trump administration.

As for the refugees now heading north, their story is one of pure desperation. 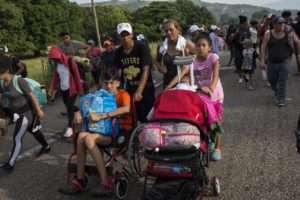 “We work and we work, but we can’t get enough to feed our families. We understand the risk and possible death, but we don’t have a choice. My father was hit by a car and the person who hit him did not have anything to give him as compensation. I would like to ask Trump to have a heart. He may have everything, and it may be hard for him to understand, but we just need a job so that we can eat,” shares a young Honduran.

Not exactly the kind of talk you’d expect from hardened foreign invaders which Trump would have you believe are marching toward us.

They know their road is long and they have no money to eat, no place to sleep, bathe, or care for their sick. They are relying on the solidarity of the citizens in the cities and towns they pass through.

“No one here has money. Some of us are already hungry, so we ask that along the road, if people find it in their hearts to share some water and food with us, we would be grateful and maybe someday we can return the favor.”

Unless you are native to the Americas, we are all immigrants. Our foremothers and fathers came here seeking a better life for their children. It’s time to begin thinking about how we can help these families and their children when they arrive—and to keep doing the political work necessary to throw out all of those in Congress who, like Trump, use fear of these refugees to stir division, hatred, and violence.