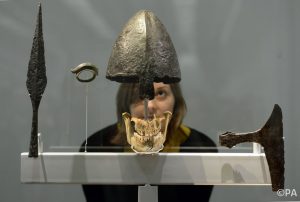 What does a 21st century Viking look like? Anthony Devlin/PA

The Vikings have an enduring appeal in the popular and academic consciousness. 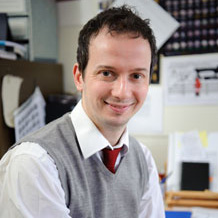 The Vikings have arrived at the British Museum. This exhibition, the first of its kind for decades, is notable for its scale and ambition. That there is sufficient demand is unsurprising, given the recent flurry of publications, exhibitions, documentaries, and even TV dramas. But does this popularity simply emerge from the romance of mythology and adventure, or is something more interesting at play?

The Vikings have an enduring appeal in the popular and academic consciousness. The narrative that surrounds them is invariably tied to a very tired debate as to whether the Vikings were raiders or merchants. But this raider-trader dichotomy has largely been put to rest in academic circles.

So I find it far more interesting to consider how and in what conditions this panoply of “Viking” characters arose, to track how our view of the Vikings has shifted. Our interest has never been politically neutral. And so the study of the period carries an inherent responsibility to write about a Viking Age that is not only archaeologically and historically precise, but also socially responsible.

Academic interest in “the Vikings” extends back to at least the 18th century, while the 19th saw the incorporation of “Viking” art and culture into the Romantic movement. In Scandinavia this was coupled with patriotism, and manifested in a flurry of archaeological excavation. In the UK, the Vikings formed a key component of the Romanticisation of the North. Their cause was taken up by thinkers such as Collingwood, Ruskin, Morris, and Scott. Then in Germany, the Viking phenomenon was appropriated into nationalist narrative, not least through Wagner, but later through its incorporation into Hitler’s Aryan package. The 1930s saw rallies at certain key monuments, and the excavation of others. 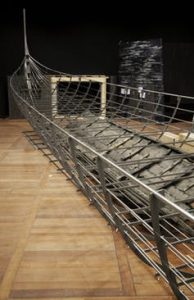 The largest Viking ship ever discovered. The British Museum

In all of this, a key component was the romance of exploration, of conquest, of landfall. So their Viking obsession struck a chord with imperialism.

But this reading of the Vikings is not inherent in the sources, and other interpretations are available to us. Indeed, in Britain the 1970s and ‘80s saw the reinvention of Vikings as Scandinavian settlers: no longer raiders and mercenaries; now farmers and fishermen, merchants and entrepreneurs.

Much of the evidence for Viking trade emerged from the urban excavations of the late 1970s and 80s. There is a probable influence of Thatcherite mercantilism on this change of tack, not least given the fact that much of the evidence was recovered via commercial excavation in urban settings. In this way, towns have come to be seen as central to many (non-Marxist) narratives of the Viking Age.

This recasting of the Vikings as first-millennial businessmen is still common in popular media.

And there are later Viking developments that are derived from recent history. In the 1990s, conflict in central Europe and Africa demanded that archaeologists revisit the idea of ethnicity. One result was a more nuanced consideration of “Norse” identity. Peter Sawyer had earlier suggested that the numbers of migrating Scandinavians had been overestimated. This now sat well with the idea that “Viking” style objects need not be associated with individuals of Nordic heritage.

The period continues to be seen as the crucible of 21st century Europe, a context for the emergence of the Scandinavian nation states. But recently a wider perspective has been put forward: Vikings as one of a number of contemporaneous groups of maritime pioneers; architects of networks that together spanned the globe. In such a model, our Vikings are neither berserkers nor proto-capitalists; they are real people. 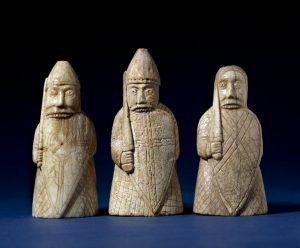 The Lewis Chessmen. The British Museum

Indeed, the Viking Age was a world that was both militarised and economic. It was a world of conspicuous consumption, but also of intimidation, exploitation, and opportunism. One may envision something like the “failed state” scenario of the Balkan Conflict, or the warlordism of 90s Rwanda and Congo. These analogies are imprecise, but serve to counterbalance our fetishisation of Viking glamour and destruction.

The collection, curation, display, and distribution of portable wealth was central to Viking Age society and economy. These warlords wore elaborate dress, with conspicuous personal ornaments and body modification, and engaged in personal grooming. So they are perhaps better seen as well-heeled dandies than as unkempt, hirsute barbarians. Another twist of the kaleidoscope, and here are the modern day Vikings, reflections of our consumerist society.

So it is unsurprising (and correct) that today we focus on the material culture of wealth and status, but our understanding of such phenomena must be grounded in the appropriate social context. If we keep returning to these almost mythical giants, then this should be in the knowledge that we do so because we see bits of ourselves in them. And so we should see some of our failings in theirs: prosperity is always built on the hardship of others.

Every warship, every silver hoard must resonate with the inequality that characterised past society. Such narratives will doubtless be clear in the British Museum’s exhibition, and we should demand no less of the popular press. We have a responsibility to focus acutely on wealth and power, so that we bring into view the architectures of exploitation and coercion that supported them.