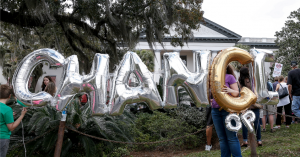 Supporters spelled out the word “Change” at a gun control rally in Tallahassee, Florida on Wednesday. The immediate calls for reform by survivors of last week’s shooting in Parkland, Florida have signified a shift in the debate over gun control. (Photo: Don Juan Moore/Getty Images)

The nation’s largest privately-owned bank, a major security software company, and three rental car companies have all ended their relationships with the gun lobby.

In the latest sign that the aftermath of the Parkland, Florida tragedy may be playing out differently than the fallout from other mass shootings, several national companies have cut ties with the National Rifle Association (NRA).

Alamo, Enterprise, and National—all owned by Enterprise Holdings—announced late on Thursday that they would end discounts for the NRA’s five million members. Symantec, the security software giant that owns Lifelock and Norton, ended its discount program on Friday as well.

The First National Bank of Omaha also said it would stop issuing its NRA-branded Visa credit cards, emblazoned with the group’s logo and called “the Official Credit Card of the NRA.” The institution is the largest privately-held bank in the U.S., with locations in Nebraska, Colorado, Illinois, Iowa, Kansas, and South Dakota.

“Customer feedback has caused us to review our relationship with the NRA,” said a spokesperson for the bank in a statement on Thursday. “As a result, First National Bank of Omaha will not renew its contract with the National Rifle Association to issue the NRA Visa Card.”

The decisions came after Think Progress compiled a list of companies that do business with the NRA, resulting in the #BoycottNRA social media campaign.

Following the shooting at Marjory Stoneman Douglas High School in Parkland, a number of teenaged survivors and their families have vocally demanded stricter gun control legislation including a higher minimum age to buy firearms, universal background checks, and other restrictions on the purchase of guns like the AR-15.

The students have strongly rejected the “thoughts and prayers” that have been offered by President Donald Trump and other politicians who have taken millions of dollars in donations from the NRA—signifying a shift in the debate over gun control following mass shootings.

“Some of you said, ‘It’s too soon to talk about gun control.’ No, it is not too soon, no, it is not the wrong time, there’s no better time than now to talk about gun control. If we wait, someone else might become a victim too,” said Florence Yared, one of the survivors, at a rally at Florida’s Capitol building in Tallahassee on Wedneaday, echoing many of her classmates.

As gun control advocates applauded the private sector for ending relationships with the NRA, some also called on companies like Enterprise and Symantec to follow through with their actions and publicly call for far-reaching gun control reform.