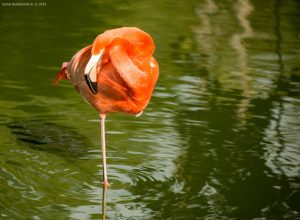 How do they do while sleeping what we can barely do at all? Carlos Bustamante Restrepo

If you’ve watched flamingos at the zoo – or if you’re lucky, in the wild – you’ve likely wondered how flamingos manage to sleep standing on one leg.

Of course, as humans, we think standing on one leg is hard because it’s difficult for us. Tree pose in yoga becomes increasingly difficult as you lift your leg higher, reach your arms up and tilt your head. It becomes almost impossible if you close your eyes. Most of us wobble and sway, then put a foot down, and shake out the leg we were standing on.

As scientists, the two of us are interested in how the brain controls the body – a field we call neuromechanics, at the intersection of biomechanics and neuroscience. Our latest research question: Just how do flamingos stand on one leg? Our search brought us up close and personal with a flock of juvenile flamingos and even flamingo skeletons and cadavers to figure out how they achieve their amazing feats of balance. 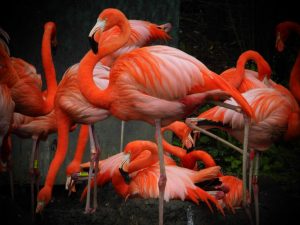 Why they stand on one leg is a mystery, let alone how. Dustin and Jennifer Stacey

When we searched the literature, we didn’t find any reports on how these iconic birds do it, but there were several theories about why they stand on one leg. 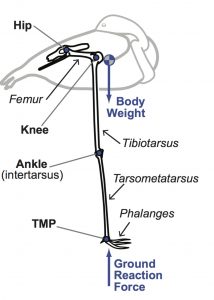 The bulk of a flamingo’s mass sits half a meter above the ground, on a single, slender leg.Chang and Ting, Biology Letters

Some people thought it was to conserve body heat lost by standing in cold water. Standing on one leg would presumably cut the energy lost to heat in half.

Another hypothesis is that standing on one leg reduces muscle fatigue by giving one leg a rest while the other supports the body. This theory is based on the idea that standing on two legs is more fatiguing than standing alternately on one leg and then the other, but no one has ever directly tested that.

A large proportion of the metabolic energy any animal expends is due to activating muscles as they stand up against gravity and control movement. If there were an added energetic cost for standing on one leg, it would not make much sense for flamingos to save on thermal energy loss only to lose on muscular energy expenditure. And if it was fatiguing for flamingos to stand on one leg, why would they switch between one leg and the other instead of standing on two legs?

When you stand in line at the grocery store, you don’t stand with your knees bent – that would require you to expend a huge amount of energy to activate your leg muscles. Imagine holding a squat posture with your thigh horizontal and your knee at a right angle – you’d quickly feel the burn. Flamingo legs (like other birds) are constantly in a state of “bent knees,” so there is the potential for large muscular energy expenditure, or muscular effort, necessary to support their body weight.

Many animals have evolved ways of moving that minimize the amount of energy they expend, whether it’s the pendular mechanics of penguins waddling and gibbons swinging through the trees or the bouncing mechanics of cockroaches.

We set out to find whether flamingos relied mostly on passive biomechanics or active nervous system interventions to stand on one leg. 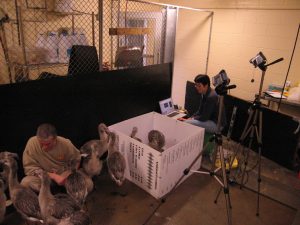 Examining flamingos, both alive and dead

One way scientists study balance is to have people or animals stand on a device called a force plate that measures the forces they apply to the ground. It works like a fancy Wii Balance Board. From these measurements, we can compute “postural sway” – the constant motion of the body when standing on one, two or even four limbs.

We don’t see postural sway in structures that are mechanically stable, like a table.

Although standing balance is something we as humans take for granted, it is actually a very active process. The nervous system constantly senses the motion of the body as it stands and makes corrections by activating muscles. The amount of postural sway is an indirect indicator of that nervous system activity. We typically don’t notice these small movements unless something is wrong with our balance. Think about closing your eyes on a moving surface, or standing when you’re dizzy.

Measuring postural sway as a young flamingo stands on a force plate. 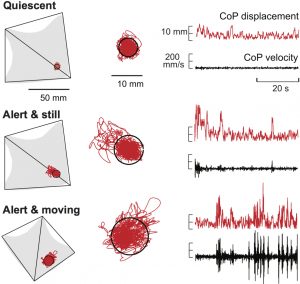 How was this happening? We turned to anatomical reports and skeletons of flamingos to see if we could find evidence of biomechanical stabilizing mechanisms that help flamingos easily stand on one leg. Finding no clear demonstrations, we decided that we needed to do our own study of flamingo morphology – that is, the bird’s structural features, and how they function together.

While the actual mechanism is still unclear, we made an unanticipated discovery from a flamingo cadaver. If you hold it up by one leg like a lollipop at just the right angle, it passively adopts a body configuration that looks like a flamingo standing on one leg. When we tilted the body forward and backward by up to 45 degrees, the body configuration was stable, with the knee keeping a right angle. When we tried to manipulate the body, we found that the joints were quite stable in resisting the pull of gravity, but that the joints could be easily moved in the other direction.

Even in flamingo cadavers, the leg joints were very stable when tilted forward and backward. Chang and Ting, Biology Letters

Gravity plus anatomy do the job

Our findings show that gravity, along with specializations in flamingo anatomy, plays an important role in helping the animals stay stable on one leg without locking their joints, which may allow them to escape rapidly if necessary. The angle of the cadaver leg when viewed from the front resembled the inward tilt we observe when the live animals are standing on one leg. When the leg was angled inward (viewed from the front) like a one-legged pose, the joints became very stable. If we held the cadaver leg more upright – that is, more vertical when viewed from the front, resembling the posture when flamingos stand on two legs – the body was no longer stable. Since muscles aren’t active in a deceased animal, we interpreted this to mean that muscles must be activated for a flamingo to maintain a two-legged, but not a one-legged, posture.

Before our investigation, we might have assumed that it required a lot of muscle energy for a flamingo to stand on one leg. But apparently it doesn’t. They can easily and for long periods hold what for us would quickly become a very uncomfortable squat pose – without using their muscles much at all.

Why do we care? This study was a fun inquiry that revealed how different standing on one leg is for a flamingo compared to a person. As scientists, it’s rewarding to study the wonders of nature and to see how physics and biology are intertwined in the behavior of animals. Still, there are practical lessons that can be learned. Engineered systems with motorized joints and legs, such as some prosthetic devices and humanoid robots, expend quite a lot of energy just to stand up. Perhaps using some principles of flamingo balance could help to design more stable, yet agile and efficient, prostheses and robots.