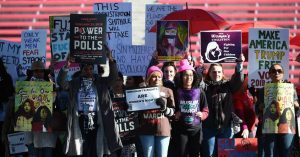 Attendees hold signs onstage during the Women’s March ‘Power to the Polls’ voter registration tour launch at Sam Boyd Stadium on January 21, 2018 in Las Vegas, Nevada. Demonstrators across the nation gathered over the weekend, one year after the historic Women’s March on Washington, D.C., to protest President Donald Trump’s administration and to raise awareness for women’s issues. (Photo: Ethan Miller/Getty Images)

It’s women of every race and creed working to bring the country back toward the ideal of a compassionate democracy. 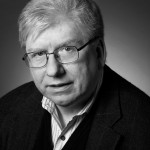 Back in 2007, just a month and a half after I was first elected president of the Writers Guild of America East, we and our friends and colleagues at the Writers Guild West were plunged into a strike against the networks and studios. For me, it was one hell of an initiation.

The strike would last a grueling hundred days and the asymmetric warfare we waged was a success, but early on the first morning I arrived at Rockefeller Center concerned that no one would show up for the picket line.

I needn’t have worried; within an hour or two, hundreds of us were marching, but as I was fretting and staring at piles of unused placards, a policeman came up to me.

“You guy are the writers?” he asked. I nodded. He pointed to the piles. “Then how come your signs aren’t more clever?”

He had a point, and as time went on, we got much better at it. By comparison, originality and adroit wordplay have never been an issue at the women’s marches, either last weekend or at the mass demonstrations a year before, held the day after Donald Trump’s inauguration and believed to be the biggest single day protest in American history.

This January, at more than 300 events in every one of the fifty states, everyone who gathered to shake a fist in protest of the first year of the Trump White House – by some estimates, more than two million in America and worldwide – knew why they were there and they expressed it loudly and well with their chants, cheers and splendid signage: from the simple yet eloquent “Dump Trump” and “Banish the Bully” to “Grab ‘em by the midterms” and “I would hate to be the guy who keeps pissing off all these women.”

Those women and men hit the pavement everywhere from Chicago and Los Angeles to Denton, Texas, and Fayetteville, North Carolina. Here in Manhattan, by 10 am last Saturday, a bright and sunny, temperate day, the streets already were filling up. We talked our way through a police line at 72nd Street, got over to Central Park West and moved downtown toward the rally site at Columbus Circle.

But after ninety minutes of being penned in with thousands of others and nothing to do but mill around and wait, we exited near where Gays Against Guns were handing out song sheets and belting out, to the tune of The Battle Hymn of the Republic, “He’s the cherry on the sundae of the racist and the rich/So afraid to pay their taxes, they will scratch a fascist itch.”

We worked our way west over to Lincoln Center and were thrilled to witness crowds surging up Columbus Avenue and Broadway working their way north and then east and south to join the march. They were angry at what’s happening but still in high spirits, still able to rally and voice their concern for all that’s misbegotten and misogynistic about our benighted White House.

Lamely, Trump tried to coopt Saturday’s events, tweeting that women had a perfect day to “celebrate the historic milestones and unprecedented economic success and wealth creation that has taken place over the last 12 months.” This was mansplaining at its lowest and just to make it worse, on Monday night there was presidential amanuensis Kellyanne Conway parroting the same disingenuous boasts of her boss. Shame on her. Again.

But more important and constructive, the creativity and commitment typical of the women who marched Saturday and Sunday translate into votes.

This week’s Washington Post/ABC News poll showed Democrats leading among female voters 57-31 percent, “double the size of Democratic presidential nominee Hillary Clinton’s margin in the 2016 election,” the Post reported. “Nonwhite women favor Democrats by a 53-point margin, somewhat smaller than Clinton’s 63-point advantage over Trump in 2016. But white women have moved sharply in Democrats’ direction, favoring them over Republicans by 12 points after supporting Trump by nine points in 2016…”

And don’t dare discount the depth of women’s dissatisfaction with Trump – six in ten female registered voters “strongly disapprove” of Trump – a feeling, if it holds, that will get them to the voting booth for sure. (According the Post/ABC News poll, on a generic ballot, Democrats are ahead of the GOP by fifteen points among those “absolutely certain” they’ll vote.)

Columnist EJ Dionne notes “a condescending habit in the nation’s capital of seeing voters as detached and indifferent to the day-to-day workings of government….

“But news from across the country should shatter these illusions. A large majority of voters, including many erstwhile Trump supporters, is rebelling. The evidence is overwhelming that the president’s foes are as determined and motivated as any opposition in recent memory.”

And yet coverage of the weekend’s marches was lacking. “After the initial flurry of media attention – crickets,” Helaine Olen at The Washington Post wrote, citing a Media Matters analysis that the Sunday morning news shows “were nearly silent on the historic protests.”

Olen added, “While it’s common sense to observe that the government shutdown is taking up some of our oxygen, the lack of attention also demonstrates how even with the #MeToo movement, it is ingrained to treat the concerns of women as secondary to, well, bigger things that are deemed more serious. And when opposition to the Trump administration and the Republican Party is framed as a women’s issue, it receives less attention than it should.”

She also quoted pollster Matt McDermott who told her that part of the problem is that the media has chosen to “course correct” because of the belief that they had failed to pick up on the extent of Trump’s enraged white male support. “There is not coverage of the actual movement building on the left,” McDermott said, “which is arguably by any measure the greatest political movement we’ve seen in decades in this country.”

Contributing to that movement, “an unprecedented surge of first-time female candidates,” Charlotte Alter at TIME magazine reports, “overwhelmingly Democratic, running for offices big and small, from the U.S. Senate and state legislatures to local school boards.

“At least 79 women are exploring runs for governor in 2018, potentially doubling a record for female candidates set in 1994, according to the Center for American Women and Politics at Rutgers University. The number of Democratic women likely challenging incumbents in the U.S. House of Representatives is up nearly 350% from 41 women in 2016. Roughly 900 women contacted Emily’s List, which recruits and trains pro-choice Democratic women, about running for office from 2015 to 2016; since President Trump’s election, more than 26,000 women have reached out about launching a campaign.”

In 1968, when insurgent Democratic candidate Gene McCarthy won more delegates than President Lyndon Johnson in the New Hampshire primary, he thanked the college kids who had fueled his campaign. “People have remarked that this campaign has brought young people back into the system,” he said, “but it’s the other way ‘round. The young people have brought the country back into the system.”

Fifty years later, it’s women of every race and creed working to bring the country back toward the ideal of a compassionate democracy. The media and establishment politicians, especially those who support and encourage our current kleptocracy of lies and inexcusable policy, ignore that power at their peril.

“Who do you think has been organizing things in America?” Harvard a professor of government and sociology Theda Skocpol asks. “It’s women.”

How does that grab you, Mr. President?