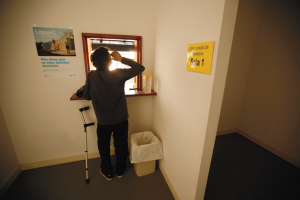 A patient drinks a dose of methadone at the Taipas rehabilitation clinic in Lisbon, Portugal © Rafael Marchante/Reuters

In 1994, John Ehrlichman, the Watergate co-conspirator, unlocked for me one of the great mysteries of modern American history: How did the United States entangle itself in a policy of drug prohibition that has yielded so much misery and so few good results?

I started to ask Ehrlichman a series of earnest, wonky questions that he impatiently waved away. “You want to know what this was really all about?” he asked with the bluntness of a man who, after public disgrace and a stretch in federal prison, had little left to protect. “The Nixon campaign in 1968, and the Nixon White House after that, had two enemies: the antiwar left and black people. You understand what I’m saying? We knew we couldn’t make it illegal to be either against the war or black, but by getting the public to associate the hippies with marijuana and blacks with heroin, and then criminalizing both heavily, we could disrupt those communities. We could arrest their leaders, raid their homes, break up their meetings, and vilify them night after night on the evening news. Did we know we were lying about the drugs? Of course we did.”