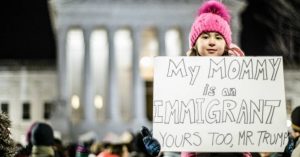 The U.S. agency charged with providing immigration services has cut the phrase “nation of immigrants” from its mission statement. (Photo: Geoff Livingston/flickr/cc)

“The Trump administration doesn’t try to hide its xenophobia.”

The U.S. Citizenship and Immigration Services (USCIS) was sharply criticized Thursday for rewriting its mission statement so it no longer describes the United States as a “nation of immigrants” and now features language that seems more aligned with the policies touted by the Trump administration.

The new version, as first reported by Ryan Devereaux at The Intercept, reads:

U.S. Citizenship and Immigration Services administers the nation’s lawful immigration system, safeguarding its integrity and promise by efficiently and fairly adjudicating requests for immigration benefits while protecting Americans, securing the homeland, and honoring our values.

The previous version was:

USCIS secures America’s promise as a nation of immigrants by providing accurate and useful information to our customers, granting immigration and citizenship benefits, promoting an awareness and understanding of citizenship, and ensuring the integrity of our immigration system.

The change was announced in an email—obtained by The Intercept—sent to staff from the agency’s director, L. Francis Cissna, who focused on the decision to remove the term “customers.”

“[W]e should never allow our work to be regarded as a mere production line or even described in business or commercial terms,” Cissna reportedly wrote. “Use of the term leads to the erroneous belief that applicants and petitioners, rather than the American people, are whom we ultimately serve.”

One former USCIS staffer commented that because the agency is largely funded by fees, the use of the term was “actually quite accurate.”

A spokesperson from USCIS sent a written statement to The Intercept after the article was published. The agency confirmed that the new mission statement is “effective immediately,” and, when asked whether it no longer considers the United States a “nation of immigrants,” said, “The statement speaks for itself.”

Other observers noted how the new mission statement captures the anti-immigrant sentiment embedded in American history, and which has become commonplace in the Trump era—as well as how “USCIS morphed into an anti-immigration agency from one that administered immigration benefits.”