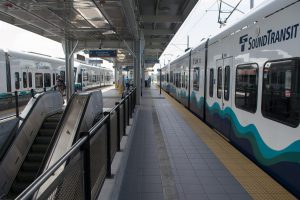 A man from North Carolina, Joshua Gitlin, was arrested by Seattle police after being caught by an 8-year-old boy’s father taking a picture of the boy in an adjacent stall in the bathroom by raising his phone above the stall.

The father rushed the man, took his cell phone, and others held his stall door closed while police were called.  He was arrested, his phone was confiscated, and he was later released on a $100,000 bond.

Yes, you read that right, a man from North Carolina – the very state that just passed bigoted legislation targeting transgender people – was arrested for doing what they claimed they passed the law to prevent.

See, there are already laws in place to deal with this type of behavior, and those laws worked in this instance after the criminal was apprehended.  Those laws apply to anyone committing such acts in any bathroom.  We don’t need new laws – unless, of course, people trying to make a point about how much they hate other groups of people.

That really is, after all, the only “purpose” laws such as those in North Carolina serve – a way for the far right to say, “WE HATE YOU!”

North Carolina needs to get its pervs under control!  Instead, the state is too busy solving a non-existent problem in its bigotry and doing nothing really about a problem that actually exists, which in this case found its way to Seattle.

Signs on bathroom doors won’t stop anyone from doing anything, especially acts of sexual violence committed mostly by straight men.

Maybe if they put signs on bathroom doors that read, “No criminal acts in this restroom.”

Yep, that’ll stop it for sure.