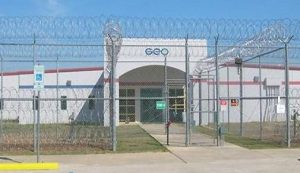 Private, for-profit prison companies are having a rough time on Wall Street today after a new memo from Deputy Attorney General Sally Yates was released that instructs federal officials not to renew private prison contracts and to “substantially reduce” the scope of those still in effect.

Yates’ statement signaled the Justice Department’s intention to completely phase out its reliance on the private prison industry, which as of December 2015 held over 22,000 federal inmates.

“This is the first step in the process of reducing – and ultimately ending – our use of privately-operated prisons,” she announced. A number of factors were cited for the decision, including the higher incidence of safety and security problems in private prisons and a general decline in the number of federal inmates.

The decision comes in the midst of a presidential campaign in which Democratic nominee Hillary Clinton has also been highly critical of the for-profit corrections industry. Pledging to “end the era of mass incarceration,” Clinton said in October that the U.S. government “should end private prisons and private detention centers.”

Today’s announcement by Yates is a big step toward that goal.

In her memo, Yates cited a recent audit conducted by the Justice Department’s Office of the Inspector General which she said found that private prisons “simply do not provide the same level of correctional services, programs, and resources” as publicly-run facilities.

The report, just released, collected and analyzed data from 14 different privately-operated prisons and found that they “incurred more safety and security incidents per capita than comparable Bureau of Prisons (BOP) institutions,” including assaults. It also found that some prisons were improperly placing inmates in Special Housing Units (SHU), segregated housing which is supposed to only be used for disciplinary reasons.

Yates further critiqued for-profit prisons for failing to maintain the same level of “educational programs and job training” as those run directly by the BOP. Such programs, necessary for the achievement of lower recidivism rates, have not been replicated in the private prisons and should not be outsourced, she said.

Additionally, the Inspector General’s report noted a need for stricter verification procedures to confirm that inmates were receiving basic medical exams and immunizations in private facilities.

The audit highlighted many of the problems that arise when prisons and profits mix. It was silent, however, on another important aspect of mass incarceration in the United States: the disproportionate impact that it has on individuals and communities of color.

A study from the Pew Center on the States found that one out of every 106 white males over the age of 18 was behind bars, but for Hispanic men, the number jumped to one out of every 36. For African-American men, meanwhile, it was an astonishingly high 1 out of every 15 who were imprisoned. In some of the nation’s biggest cities, more than half of young black men are either currently in a correctional facility or carry a criminal record from a previous sentence.

The for-profit prison industry benefitted from the rapidly rising rates of incarceration that have characterized U.S. criminal justice policy since the 1980s. It has lobbied for longer sentences, advocated more restrictive rules to keep undocumented immigrants locked up, and pushed for “bed guarantees” in contracts which would force the government to supply them with a minimum number of inmates.

Phasing out the use of for-profit prisons at the federal level is an important first step toward the much bigger task of completely overhauling the criminal justice system in the United States.

The Bureau of Prisons spent $639 million on private prison contracts in 2014, with much of that amount going to two companies: Corrections Corporation of America and GEO Group.

As of mid-afternoon Thursday, stocks for both prison companies were down by nearly 40 percent as investors bailed following the release of the Yates memo. Trading of their shares has been halted repeatedly throughout the day due to their volatility and the massive volumes being sold off.

With the loss of their biggest customer, both Corrections Corporation and GEO now face uncertain financial futures. They will still be able to rely on their contracts with state prisons, but the end of their U.S. government business will put a major hole in their balance sheets.

As existing federal contracts expire, it is unclear how the companies will be able to maintain current levels of profitability. Almost half of GEO’s profits, for instance, come from its dealings with the federal government.

Market analysts had marked it as a “stock to buy when Donald Trump is president” on expectations that the GOP nominee would increase detention rates, especially of immigrants. But now the company’s stock price is sliding even faster than Trump’s poll numbers.

It will be up to voters to decide whether the fates of Trump and the private, for-profit prison industry remain intertwined on Election Day.